Being up in the land of the toon again for my missus’ (insert more acceptable nickname here) birthday saw me with a Saturday afternoon with a potential football game if I found one nearby. Brilliantly, the Percy Main boys were playing just up the road at Heaton Stannington. One of my favourite visits ever whilst doing this blog was my trip to Purvis Park and so it would be great to see them again away from home this time away at one of the Northern Alliance bigshots. 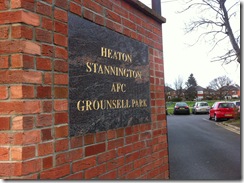 Heaton is a residential suburb and located in the east end of Newcastle, about 2 miles from the City Centre. The name 'Heaton' means high town, referring to the area being situated on hills above the Ouseburn, a tributary of the River Tyne. By the 18th century, Heaton was a coal mining area with many of its collieries owned by Matthew White and Richard Ridley. The Heaton estate was broken up in 1835 when the area became officially incorporated into Newcastle. Much of the land in Heaton in 1840 was owned by Amourer Donkin, who on his death in 1857 bequeathed the land to his business partner, the industrialist Sir William Armstrong. In 1879, the corporation acquired part of the Heaton Hall estate, which was then laid out as Heaton Park, and Sir William Armstrong donated Armstrong Park and Jesmond Dene to the city. The three parks run into each other to form a green corridor through east Newcastle. Today, Heaton is a mixed working class and middle class area and has become a popular residence for many students attending the city's two Universities, Newcastle University and Northumbria University. 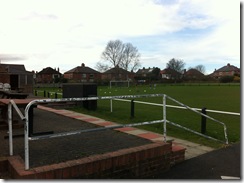 Heaton Stannington were founded in 1919 and have played at their Grounsell Park home (formerly known as Newton Park) since inception. They have been Northern League members at some point as they joined the league in 1939 (oops) before being not allowed to play at their ground during the war as it was taken over by the military. After leaving the Northern League in 1952 (they haven’t been back) they floated around regional leagues and the Wearside League (?!) for 10 seasons before joining the Northern Alliance where they still are today. After winning promotion to the Premier League of the NA, they are a top side in the division and normally find themselves in the upper reaches. Their ground is a smart one and very good for Level 11. With a raised standing area (see picture above) and railed off around 3 sides of the pitch, it is a smart place to watch football. Apparently (according to a review) the capacity of the ground is 2,000 although Heaton would be delighted if 100 came to one of their games. They also made enquires this season about what would be needed to be done to improve the ground to bring it up to Northern League 2012 standards and were told pretty much everything. Floodlights, seated stands, hard standing all the way round. They better get comfy in the Northern Alliance then… 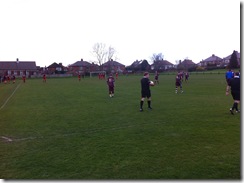 They are doing well this season too Heaton as they were going into this game in 5th, but only 3 points behind current leaders Carlisle City. Percy Main had changed a lot personnel wise since I saw them in 2010, with only 2 members of the team that beat Cullercoats that day still playing for them now. They were doing ok in the Premier Division although still had a small fear of relegation as they were down in 10th on 28 points going into this game, but had played 24 games already so only had 6 more games this season and probably needed a few more points to guarantee safety for more top flight Northern Alliance action next season. I met up with Ian Cusack (A.K.A MR Percy Main) who was stand in secretary for the day and he informed me of how PMA were doing and little facts about Heaton Stann and the ground. 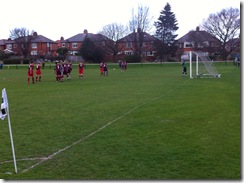 With Heaton above PMA in the table, it would have been a surprise if on 3 minutes, James Leggett had put his powerful header on target from a corner, but instead he put it over. The home side came right back though as their pacey forwards were giving the away defence a runaround and Wright had a long range effort easily dealt with by Rodgerson. That defence looked all over the place though and they were possibly lucky to not be a man lighter on 11 minutes when Jevon Jull took out Andrew Weeks in the area when the Heaton man had turned his marker. Jull was only given a yellow card by Neil Wright, which caused the HS bench to go apeshit, but Wright took his time on the decision and didn’t take the easy option, so well done him. Ex Hibs trainee Jonathon Wright took the penalty but rolled it wide to keep it at 0-0. The home side were dominant now and as they crashed a shot off the crossbar and Scott Parker (not that one) headed into the ground and over from 6 yards as the opening goal looked only a matter of time. It did come on 36 minutes when Tony Browell’s header was poor and Wright hit a volley over Rodgerson and in. Rodgerson kept the game alive on 43 minutes when he brilliantly saved Waggett’s 1 on 1 chance, but half-time came and PMA were still in the game. 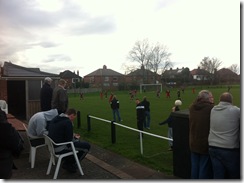 The second half, I felt started quite slowly, helped in part by a Percy Main reshuffle at the back which tightened them up and made Heaton worked harder to try and break them down. They fired a shot over the bar after a corner wasn’t cleared that far on 59 minutes that was the first chance of the half. Percy Main had their best chance on 63 minutes as Tony Abladey took advantage of a poor passback and rounded the Heaton goalie, but the angle was now too narrow and he lost the ball as he tried to cut it back. Heaton though were rarely troubled after that and hit the post on 79 minutes as well as creating a couple more chances as they easily held on to pick up 3 points. 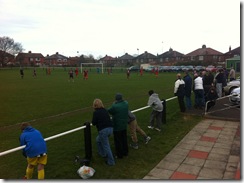 Nice, relaxed game afternoon spent at Heaton as I was treated to a fairly decent Level 11 game. Both sides have played a couple of game since this game (and purely because I’m apparently too busy to write a set of coherent words nearer the time!) and Heaton have won two since then, with a win over Merton before a mighty important 2-1 away win at Carlisle City to put them in the driving seat for the Northern Alliance title. PMA did win 1-0 at Ashington Colliers to all but confirm their Premier place before getting pummelled 4-0 at home to Stocksfield to show there is work to be done next season for them. It was great seeing Ian Cusack again and I fully recommend the Northern Alliance, I’ll be back at some other North-East outpost some day.

- Food: N/A – none at ground as such, got some piss poor chips from Newton Road)