I know exactly what you are thinking when you first read this. Level 12!? However, Percy Main was too good an opportunity to miss and my wallet loved me for it. Spending a weekend away in Newcastle with el missus, I look around straight away to see what games on Tyneside I could go to. Newcastle at home to Ipswich? Seeing the Magpies finally win a trophy (of some description) was tempting but paying £30 was not. There was then Gateshead vs AFC Wimbledon, a game I actually had planned to go and see – however we were up for the weekend to watch Kevin Bridges and so going over to Gateshead may be cutting it just fine. West Allotment Celtic and North Shields were also looked at before I stumbled across the little village club of Percy Main, a rare issuer in the Northern Alliance and with admission only £1 – I was right on it. A short Metro trip to Percy Main station and a 2 min walk saw me to Purvis Park. 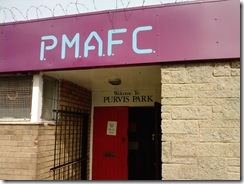 Percy Main is a village in North Tyneside, which lies on the outskirts of North Shields and its only main feature seems to be the Tyne Metro station which is found at the top of the village. (The village doesn’t even have a Wikipedia page) Purvis Park was originally called Middle Row Park (reference to three sets of cottages on site) but renamed in 1996 to Purvis Park named after Alan Purvis, who dedicated 50 years to the club as a player, Secretary and even Chairman. The ground today seems to be pretty decent for this level (compared to Level 12 in Devon), although I have no idea what other Div 1 Northern Alliance grounds are like. A building, which included the changing rooms, tea bar and toilets met you on site and a walk through the building brought you out onto viewing the pitch. The building has cover which is great when it rains (every 2nd day in Tyneside) while the rest of the ground is hard standing with most of it railed off. Behind one goal is the Percy Main Cricket Club, which is separated by a strange hedge (picture below) which allows spectators to view both games at once. (Cricket is a dire sport so I took no notice of the game going on) 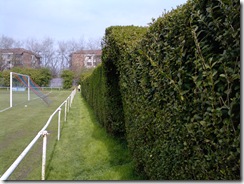 Percy Main Am have had a decent history considering the small village they represent, joined the Northern Alliance in 1968 and they won the league two years in a row from 1980 to 1982. However recently, the team have struggled and were relegated from the Northern Alliance Premier in 2005/06 when they finished bottom of the league. Two seasons of relegation battles before a 5th place finish last season has seen Percy Main rise up and were involved in a promotion battle this time out and went into this game in 2nd position. 5 points behind Gateshead Rutherford but with a game in hand. However, 3rd place Amble Utd were only 2 points behind Percy Main, with a game in hand over them and so the promotion battle would most likely go right down to the wire. Their opponents were local(ish) rivals Cullercoats, from the village on North Tyneside coast, who have recently rejoined the Northern Alliance in 2006 and were promoted in 2008 to Division 1 and even finished in 4th position last season. This season, however Cullercoats had found their level and were in midtable, currently in 7th, although they were in no danger of relegation. 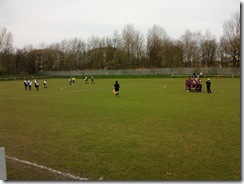 As the game kicked off it was great to hear 22 Alan Shearer’s shout and bark instructions to their team-mates and while the quality was really not great, the effort was there as Percy Main dug in to deny Cullercoats a foot-hold in the game. The first real talking point come on 4 minutes though when Cullercoats got the ball into the box but the chance was wasted when the shot went up and over the bar. Percy Main took the lead though on 16 minutes when Culyer managed to work his way to the edge of the penalty area when he was barged over needlessly and the referee gave a penalty. Without the benefits of replays it was tough to say if the barge was in the box, but Jason Ritchie was not bothered as he smashed the penalty to his left to give PM an early lead. The rest of the half was a midfield battle as both sides battered each other but no real goal scoring chances were created until 32 minutes when a lob shot from afar flew just over the Cullercoats bar. At half-time it was 1-0 and I made my way down past the hedge to watch the 2nd half from the other side. 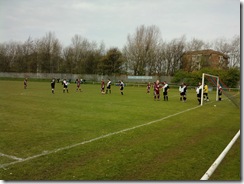 Half-time was only 8 minutes long but when we did get underway again, Cullercoats clearly believed they could grab an equalizer as they began bombarding the PMA goal and area with long balls. 56 minutes in however, Cullercoats got a 1 on 1 situation when a long ball caught the PMA defence out, however Stewart Wright could only see his shot easily saved by PMA goalie Rob Rodgerson. Cullercoats kept going though and had their best chance of the game on 83 minutes when a deep ball towards the back post found Robert Watson but his volley was weak and easily saved by Rodgerson. When it looked like it would finish with just the one goal, PMA wrapped up the match in stoppage time when Liam Knox broke down the left and his great cross found Malky Morien who’s header was well placed past the Cullercoats goalie and wrapped the 3 points up with one of the last kicks of the game. 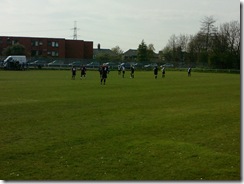 A great (and sunny) day near the Tyneside coast as my first dabble with the Northern Alliance was an extremely successful one. While the quality was not always the best on show, this is Level 12 – proper grassroots where a lot of teams in this league don’t even have an attendance price. PMA though produce a great programme and with admission only £1, you really can’t complain. The bright summer weather also made this better as even the cricket teams were watching with can of lager in hand, taking a break from their pishy sport. If you’re in the area and want some cheap entertainment on a Saturday afternoon, then Percy Main is really great fun – and they do cracking food too! In tribute for the real reason I was up in Newcastle, have some Kevin Bridges:

- Programme: 9/10 (one of the few to issue in this league and its a great effort) 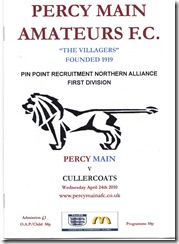