In some ways this almost felt like my 1st match of the season. Maybe because of doing 2 unexpected grounds in the North and a re-visit for my last match, this felt like a brand new start. It was also 4th time lucky for my 4th game of 2010/11 as I would finally make it to Edge Down Park after being denied by the elements twice at Christmas and once over Easter last season. So with the weather surprisingly looking great in N.Devon when I left, I headed over through the sticks to Withy. 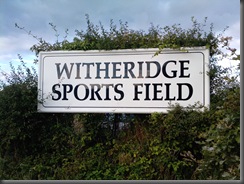 Witheridge is a small village in North Devon and is really quite small. In fact the only distinguishing point Wikipedia could find is, “Its name is derived from the Old English for "Weather Ridge", probably as a result of its exposed location on the top of a hill, which means it and surrounding hamlets such as Nomansland generally suffer from poor weather for much of the year.” Exciting stuff! You could tell how small Witheridge is and how important its team’s clubhouse is as it was fairly packed upon my arrival with people who weren’t even watching the game. 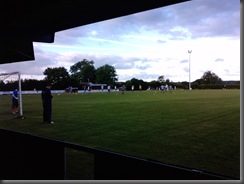 Edge Down Park is a strange ground is there is a small gap between it and the clubhouse/changing rooms which was quite worrying at first when I arrived and could see no sign of a pitch. Going through the small hut to pay admission entry (£2 = win), Edge Down Park is a small ground and its hard to see how it could be improved substantially if they wanted to make the move to Western League. There is a seating area, a small block of benches which is covered and next to the dugouts and there is a small covered area behind one goal, although not many people could fit under it! The rest of the ground is standing, except for behind the other goal which is off limits due to it leading to another field! Despite it being small, it has a certain character which I really like and it suits Witheridge’s needs perfectly. 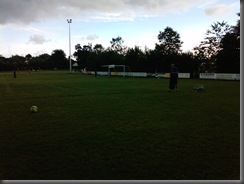 Witheridge have come quite a long way in a short(ish) amount of time. Having joined the vast Devon and Exeter League in 1971, they finally made it to the Premier Division of this League in 1996. 10 years later saw Withy promoted to the Devon County League and were benefactors when the Southwest Peninsula League was created as Withy found themselves in the Premier Division where they still are today. Withy came 10th last season, however they were rocked in June by their manager’s decision (Chris Vinnicombe) to join Tiverton Town and so Wellington boss Warren Patmore stepped in to lead the village club on. Vinnicombe was back for this game as Tiverton boss who face a daunting task to try and stay in the Southern Premier League after only surviving on a reprieve last season. Vinnicombe himself is Player/Manager taking his left back position while a few old faces have left and so Tivvy line up with a new looking side hoping to stay up. Probably as part of the deal that allowed Vinnicombe to go to Tivvy, this friendly was arranged and it looked to be an intriguing one at that. 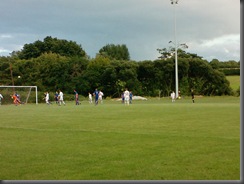 Soon after kick-off it was clear that Witheridge were more ready for the new season than Tiverton and that was understandable considering Withy kicked off a week earlier. Most of the 1st half was quite average but two main chances both fell to Withy as on 9 minutes, they broke clear but the one on one chance was saved by Tivvy goalie Chris Wright. Witheridge were oh so unlucky not to take the lead on 14 minutes when Wright was caught out in no man’s land and a Withy player lobbed the ball over him only to come back off the post and Tiverton escaped. The rest of the half was a fairly dull affair with my only other moment of note came on half-time when in a Tiverton rare attack, a Tivvy player collided with the Witheridge goalkeeper – both were ok though. 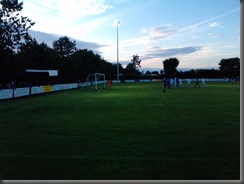 The 2nd half saw more of the same as I began to accept that this would be an early 0-0 for the season until 54 minutes in when Withy broke down the right and while the first shot in the box was cleared off the line, Withy’s right winger got another chance to get the ball in and Steve Ebdy smashed the ball in from inside the 6 yard box and the Withy fans behind the other goal went mental. This woke Tiverton up and could have nearly equalized straight away when they won a free kick just outside the box, but the effort just curled over the bar. Tivvy’s best chance came late on when their Scottish captain sped unto the area and was one on one against Withy keeper Steve Johns, but his cheeky chip went straight into John’s grasp and Witheridge won the match. 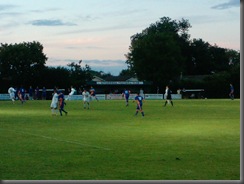 Witheridge looked fairly decent in this game and should be more than ok in the Southwest Peninsula Premier this season. As for Tiverton, you have to be more than concerned. Player/Manager Vinnicombe was one of the quietest players on the pitch and so surely being in the dugout would be better for him? Also, this team look a shadow of the side of last season that finished 4th bottom and should have been relegated. Their opening game of the season at home to Windsor and Eton on 14th August should be a very interesting one indeed.

Photos from Witheridge vs Tiverton Town 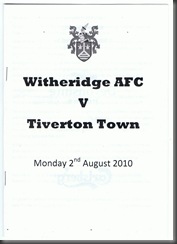