Programme: £2 (from original date with insert)

It would be typical that Morecambe, a team I adopted when I went to Lancaster University from 2007 to 2010 would move to their new ground the summer I graduated. I had wanted to get t’Globe in its first season up and running and with my girlfriend still up “learning” in Lancaster, I made the trip up to see her and was lucky enough to schedule my trip with a rescheduled match at the Globe as Morecambe welcomed local(ish) rivals Macclesfield Town for a midweek clash. 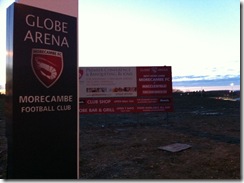 For blog reports, I had visited Morecambe’s old Christie Park twice and saw them win on both occasions (vs Aldershot Town and vs Dag and Red). Both of these games were at the tail end of last season (2009/10) and with Morecambe finishing last season in 4th, I (and probably many others) expected them to fully challenge for promotion this time out. However, this had not materialized this season. Maybe one reason could be that the Shrimps are not fully used to playing at their new home, the Globe Arena. Built by Globe Construction company on a barren field in the Westgate area of Morecambe the Globe is a new build that has actually had some thought put into it rather than plopping 4 identi-kit stands in a bowl like most new grounds are. In fact, the ground can be seen as a modern version of their old stomping ground. The two stands behind the goals are both covered terraces. One for away fans (normally) and the other for the louder Morecambe support. One main stand straddles down the side of the pitch, the Peter McGuigan Stand, named after the former Umbro CEO who is currently Chairman at the Lancashire club, is a highly impressive structure which also includes corporate areas that Morecambe so desperately lacked at Christie Park. Finally, was the uncovered North Terrace where I chose to stand for this game which looks like an updated Car Wash Terrace at CP. It is an impressive ground which hopefully Morecambe can now kick on from. 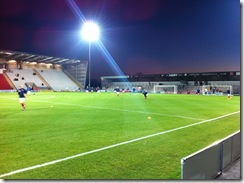 Morecambe were going into this game down in 19th place with 43 points, with a 9 point gap away from Barnet down in 23rd. They had won at the London based club in their previous game which should (in theory) all but secure their Football League status for another season. They are lucky in the fact that teams below them such as Stockport, Barnet and Burton Albion are so poor that two of those 3 should fall through the trap-door into Blue Square fun for next season. Something though, has seriously gone wrong at Morecambe this season as a team tipped by many for promotion is now fighting to stay in the league. The pressure is really on Sammy McIlroy and I would not be surprised if he was moved on in the close season. (If Morecambe do go down, then that is certain) What is more surprising is that Morecambe’s team on paper looks actually very good and should be higher than their lowly 19th place. 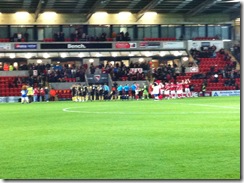 They welcomed a club that is always tipped by bookies to go down in Macclesfield Town. Town were also on 43 points for this game, but above Morecambe on goal difference and had played two games less. Sadly, like last season for the Silkmen, this had been a season of sadness after the shock death of midfielder Richard Butcher at only the age of 29 in January. Add this to the sad death of former boss Keith Alexander last season, the heart and desire within Macclesfield Town’s camp is great to see and Keith and Richard are and always will be fondly remembered at Moss Rose and their other clubs. While not mathematically, one more win for both of these sides should realistically cement their place in League 2 for 2011/12 so the low crowd at t’Globe were hoping for an open and decent game. 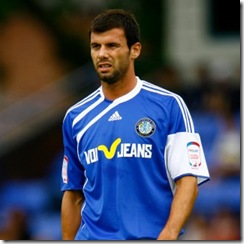 Macclesfield started off far better as they really took the game to Morecambe, whose back 4 looked incredibly shaky when properly got at. The Macc Attack launched some long range efforts that were getting closer from each attempt as Barnett, Daniel and Reid all took fire. The first shot on target was from mobile howitzer Hamza Bencherif as his shot was well saved by Joe Anyon and Macc Attack’s opening goal just looked a matter of time. Fair play to Morecambe then who came right back into the game when Danny Carlton had a header well saved in the box as Macclesfield tried to readjust their defence when captain Paul Morgan was injured and subbed early on. In fact Morecambe were coming up to HT and felt unlucky not to be in the lead as Fleming and Hurst both had efforts that just went wide. Then on 43 minutes another contender for “The Travelling Fan’s Goal of the Season” flew in. Morecambe had two chances to clear Izak Reid’s cross well away from the area but didn’t manage it and so when Bencherif swivelled and smashed a half-volley into the top left corner they really only had themselves to blame. Bencherif has been scoring cracking goals all season and this was another special one. Anyon didn’t even move as he was helpless. Stunningly, Macc Attack were 1 up at the break. 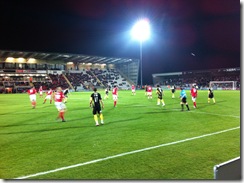 I expected Morecambe to come out all guns blazing for the 2nd half to try and fight for an equalizer but it was Macclesfield who dominated the opening proceedings as Morecambe surprisingly had no fight about them at all. Macclesfield nearly doubled their lead when Nat Brown’s header was just cleared off the line despite the appeals from Macclesfield claiming the ball had gone over. There was to be no denying the Macc Attack though and when Stewart Drummond gave away a stupid foul on the right wing (which he was booked for) the free kick lofted in found Tyrone Barnett who’s leaping header gave Anyon no chance and Morecambe were now 0-2 down with 56 minutes played. It did spark the home side back into action somewhat as they grabbed a goal back 3 minutes later. Laurence Wilson played an excellent 1-2 which allowed him to run into the Macc penalty box and his cut back was finished well by Spencer. Morecambe now pushed forward and so very nearly had an equalizer when hero at Barnet, Danny Carlton had a dipping volley from outside the area well saved by Jose Veiga. That was about all Morecambe could really muster as the Macc Attack easily soaked up their remaining pressure and even finished the game a man better when Drummond stupidly brought down Bencherif to pick up his 2nd yellow. Macclesfield easily saw injury time out and are pretty much certain to be playing in the Football League next season. 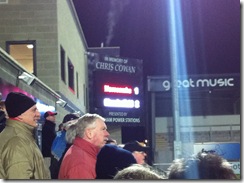 I really like the Globe Arena, it is a smashing little ground and the character and memories that Christie Park had built up so well will come over time to Morecambe’s new home. What league Morecambe will be playing in the future still remains to be seen. I have a soft spot for Morecambe, I always check their results after Hearts and it does pain me to say it but I think Sammy Mac should walk at the end of this season. The Shrimps have clearly taken a backwards step this season and Sammy Mac had probably done all he can for the club. But he has done so much and will be fondly remembered if he does go. Morecambe’s dire home form continued on the Saturday as they crashed 0-3 to high flying Wycombe while Macclesfield surprisingly lost 0-4 at home to Stevenage. Some massive games coming up for Morecambe. Lets hope they can stay up!

Photos from Morecambe vs Macclesfield Town 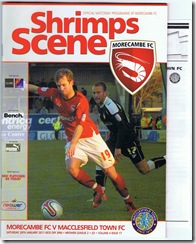