With Dunston 1-0 up from the 1st leg and a tough trip to Derbyshire to come, this tie could still have gone either way. I didn’t go to this as I was stupid enough to go to watch my Wakefield boys play at London, but was thinking about this game most of the day and trying to get updates from Twitter. 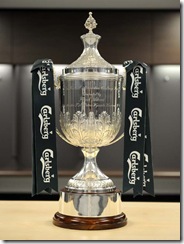 The FA website describes the action well from Staveley:

“Dunston UTS secured their place in The FA Carlsberg Vase Final against West Auckland Town courtesy of a 3-2 aggregate win over Staveley Miners Welfare.
They left it late, though, as they needed an 85th-minute goal from Stephen Goddard to make it 2-2 on the day and take them through on aggregate. But he was later sent off as both sides were reduced to ten men in a fiesty encounter at Inkersall Road.
Dunston manager Billy Irwin had said it would be a tough trip for his side and so it proved. The hosts re-took the lead on 35 minutes and looked odds-on to progress. But Staveley were themselves reduced to ten men in the second half and as legs tired Goddard was there when it mattered to take Dunston to Wembley.” 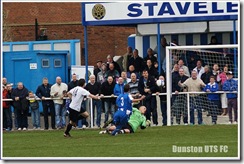 Really well done to Dunston UTS then and I’ll be seeing the FA Vase final with you on May 13th at Wembley. The whole day is set to be a North-East extravaganza with fellow Northern League side West Auckland Town facing them after seeing off Kent League side Herne Bay in other other Semi-Final. *Best NE accent* It will be real kanny like! (I’m sorry)

This game was a bloggers special it seemed as 3 reports are all online and listed below for extra added detail: