With being on holiday currently from uni (if you can call revision a holiday), the need to visit more grounds was high. No game for over a month meant an Easter double for me in Devon. The first game, playing on Good Friday was a derby between Bideford AFC and Barnstaple Town. Bideford is a small town in N.Devon on the estuary of the River Torridge. Bideford, I must admit is probably my favourite town in North Devon, for its lovely river (sorry, estuary) running through it which can provide some nice views. Bideford AFC currently play in the Toolstation Western League Premier which is on Level 9 of the English Football Pyramid. Despite winning this division lots in recent years, the club have never applied to play in the Southern League (they last played there 1974/75). In the programme it mentions that the cost of travelling to clubs 000’s of miles away is not appealing and with clubs like AFC Hayes and Uxbridge (both in London) playing in the league they would join, it is understandable. The club play their home games at The Sports Ground which is on the main road that runs through Bideford which is opposite a Morrisons. The ground is in a great location and is quite a nice ground with standing all around the pitch, apart from a long covered section running down one side of the pitch with both seats and stands and on the other side a smaller but taller stand for seating only. 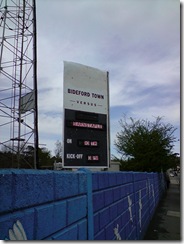 Today’s visitors to Bideford today was Barnstaple Town, who are only 10 miles away to the East. A local Good Friday derby it was then, with the added spice of Barnstaple in relegation trouble, trying to avoid the drop to the Western 1st Division and playing mighty giants such as Shepton Mallet and Wells City next season. Going in to this game, Barnstaple were in 20th position, out of 21, and 4 points behind 19th place Chard Town, but with two games in hand. Bideford meanwhile, were having a great season and recent unbeaten run had seen them leap up to 2nd place in the league, 5 points behind leaders Bitton, but have played 4 games more. With promotion a no, but 2nd place a possibility, this game should have enough in it to be a classic. Another spice to this, was the return of Barnstaple manager Owen Pickard, and players Darren Hawkings and Kevin Squire to Bideford. Hawkings in particular was given a heated reception by the people standing next to me. 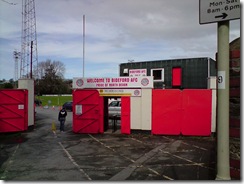 Having arrived at the ridiculously early time of 1:25, and in the ground by 1:45, I took a few pictures (some are the wrong size due to me peeing about with my camera) and was quite astounded at the quality of Bideford’s programme. A full colour, glossy number which puts many league clubs to shame and cost only £1. The ground filled up to a strong number as is expected with this game being an annual, Boxing Day/Good Friday fixture, and 635 attended the return fixture in Barnstaple over Christmas – the highest attendance in this league this season. The game kicked off to a strong wind and it was clear from the start Barnstaple were up for the fight and playing towards a strong wind in the ground. A few feisty challenges happened early on as both teams struggled to pass the ball to each other regardless of how close teammates were. The opening goal came out of nothing, absolutely nothing. A Bideford throw in had nearly reached the half way line down by the touchline nearest to me, when Barnstaple defender Darren Hawkings, who height wise can only be described as big, smashed the ball towards the goal in a clearance. However this ‘clearance’ hit the post and Kevin Squire was on hand to head the ball home. 0-1. Barnstaple then sat back on this surprise lead and let Bideford take the game to them. The passing got even worse however as both teams resulted to hoof-ball back to each other as this killed the contest and the atmosphere as the game began to be horrible to watch. Bideford thought they were level on 44 minutes when Hawkings headed a cross straight into his own net, yet the referee had judged a push on the defender. Half time, 0-1 and a hope that the game got better. A lot better. 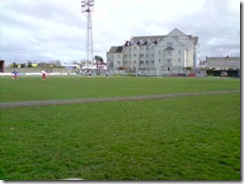 It didn’t. The 2nd half was one of the worst 45 minutes of football I had seen with Barnstaple still defending well and killing the atmosphere as the 515 (although 600+ seems fair) crowd wondered what on earth they were watching. Bideford had another goal disallowed on 68 minutes when Densham volleyed home after a great passing move (probably the only passing move of the game) but he was offside according to the assistant, I wasn’t so sure. Bideford did get a deserved equalizer on 84 minutes when a free kick out on the far side was hooked home by Densham to wake the crowd, and although they pressed on, Bideford could not find a winner.

A point apiece will not please either side, although deep down Barnstaple would have probably taken that before the game. Very very few players impressed, but the standout for me was Barnstaple’s Darren Hawkings who won every header he went for and played a generally decent game in defence. The Sports Ground is a nice venue and may be back quite soon, although a trip to Barnstaple’s Mill Road is a must first. Also, due to the strange fixture list, this was Bideford’s last home game of the season with 4 away games in a row to complete the season. Barnstaple next have another derby against N.Devon’s Ilfracombe Town on Easter Monday. If I had known about this game I would probably be going to that but instead I next travel across to East Devon on Easter Monday and hope the game at Tiverton is a far better game than this.

Photos from Bideford vs Barnstaple

- Referee: Robert Greenwood – 7/10 (I thought he had an ok game, Bideford manager Sean Joyce would disagree with me) 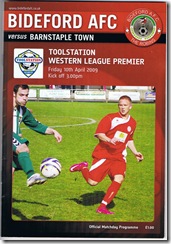