Believe it or not, occasionally Premiership sides actually offer good value for money tickets to see them play. Normally in a cup game when they are playing someone they consider tinpot and it means people like me can pop along, finally see a game at a big ground for a good price and never return. Having bought my £10 ticket for this game a couple of weeks previous to this game I could not envisage the crisis that the Arse were in coming into this game. An unthinkable defeat to Shrewsbury (who themselves were going well in League 2) would most likely see Wenger out of a job. Interesting. 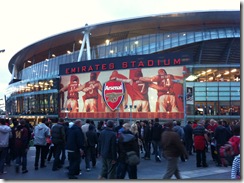 Arsenal were founded in 1886 as Dial Square were based way down “south of the river” in Woolwich and shortly after their formation were renamed Woolwich Arsenal and began to achieve moderate success with election to the Football League in 1893, before being promoted to the First Division in 1904. The club's relative geographic isolation resulted in lower attendances than those of other clubs, which led to the club becoming mired in financial problems and effectively bankrupt by 1910, when they were taken over by businessmen Henry Norris and William Hall. Norris sought to move the club elsewhere, and in 1913, soon after relegation back to the Second Division, Arsenal moved to the new Arsenal Stadium in Highbury, North London and became the MK Dons of their day. Their first real success came under the management of Herbert Chapman when they won the FA Cup and 2 League Championships in the early 30’s. Throughout the previous century Arsenal dipped in and out of success before current boss Arsene Wenger took over in 1996. His ‘new’ thinking around training and tactics means he is easily the most successful Arsenal manager of all time with numerous league wins include the famous “invincible” season in 2003/04. He hasn’t led them to a European title though, yet. 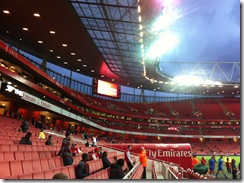 Despite all this though, Wenger is a man under pressure. No trophy of any kind (the Emirates Cup doesn’t count) since 2005 which was compounded by a last minute Carling Cup final defeat to Birmingham last season. A poor start to this season which included the absolute raping they received at Old Trafford. (I’d 8-2 break it to them, etc) as well as defeats to Liverpool and a 4-3 loss at Blackburn going into this game. Wenger needed to spend money and bought 4 players in the last 48 hours of the transfer window and so pressure was on Park Chu-Young, André Santos, Per Mertesacker and Mikel Arteta to deliver and immediately. Along came the perfect game for Arsenal to recover then, a Carling Cup tie against League 2 Shrewsbury. The Shrews may well be going well in their league under Graham Turner, but they came here with not a hope in hell according to Arsenal fans, some of who hadn’t even heard of the place or realised that people play football below the Premiership. (I did actually hear “I didn’t know they played football in Shrewsbury”) 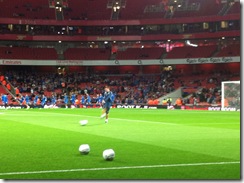 Shrewsbury fans were clearly down for the evening sightseeing and viewing the Emirates Stadium then and Arsenal’s new ground is fairly impressive. I had a front row seat which only cost £10 and allowed me a decent view of the pitch. (I had been warned the sight lines are poor in the ground and so nearly paid £20 to sit in the higher areas of the ground). Nice padded seats are also provided as well as frequent references to the club and it’s history with various players in huddles around the ground, a clock installed at the newly named Clock End (a la Highbury) and impressive inner features with swank looking bars and millions of outlets for Arsenal crap gear. Shrewsbury though were only here for the evening out and they had brought an impressive number down from Shropshire with their support basically filling out their allocation as they sold 5,000 tickets for this game. (Fair play to them for coming down here in numbers – and they were in good voice before KO) 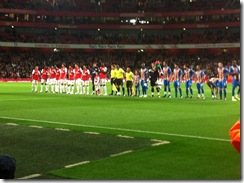 Game KO’d with Arsenal going straight at the League 2 side as an early goal would surely have put the game beyond the away side already and they had goalie Ben Smith to thank as he first saved brilliantly from a Chamakh header before Chamakh met a low cross at the back post which Smith was equal to again. Shrewsbury though slowly came back into though and on 13 minutes they actually had the cheek to mount a shot at goal when Collins was put through on the left and squeezed a shot across Fabianski. The ball rolled against the outside of the post and Marvin Morgan forced Fabianski into a save from the rebound. This actually woke a few Arsenal fans around me up as they now realised they were actually in a football match and not a training game against some part-timers. If the Shrews had the cheek to mount a shot then 3 minutes later they had the absolute audacity to take the lead as Morgan had all the time in the world to cross from the right and an unmarked James Collins powered his header into the top corner. Suddenly, the atmosphere changed. The crowd turned on this Arsenal side containing 6 full internationals and the away side could sense a shock. Chamakh was then nutmegged on the edge of the Shrews area and people around me went apeshit and then a last ditch block from Gibbs stopped a 2nd goal going in. Arsenal, losing to Shrewsbury? This would implode all those young Arsenal minds and surely send Wenger to the Job Centre in the morning. Luckily then, they equalized on 33 minutes, as Carl Jenkinson crossed from the right and the ball found Gibbs at the back post who sent a header past Smith for 1-1. Smith should really have done better. The relief around the ground was felt but the rest of the half saw both sides get crosses in and create half-chances so Arsenal weren’t fully safe yet. 1-1 at HT. 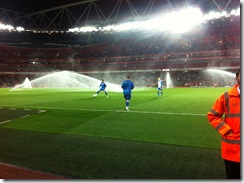 Just like the 1st half, Arsenal shot out of the blocks again but this time you sensed Shrewsbury wouldn’t be able to keep up with the constant moving and passing from the home side. Gibbs was causing all sorts of problems at the back early on with crossing and darting runs which meant Arsenal were becoming a lot more of a threat. In fact on 58 minutes when Alex Oxlade-Chamberlain hammered a shot in from outside the area that flew straight into the bottom corner, you couldn’t say it wasn’t deserved. Arsenal fans finally found their voice (you only sing when you’re winning was so so true) as the team started to relax now as the away players looked knackered. In fact it was only time before Arsenal scored a 3rd and when AOC sent Oguzhan Ozyakup (yup, remember the name) away he crossed brilliantly to Yossi Benayoun who took a touch to compose himself before slotting home and send Arsenal through to the 4th Round. The final 10 minutes were a procession as Arsenal brought on another couple of players who will probably never make the first team again (prove me wrong boys) as the game was up for both sides at 3-1. 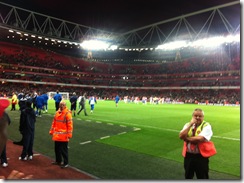 Arsenal’s reward for this win was a 4th Round tie at home to Bolton (who since playing this game, met in the league and Arsenal coasted to a 3-0 win) which should be more interesting for the reserves. Shrewsbury’s reward was respect from the home fans and a lot of respect from me for doing League 2 proud and outsinging the home side all game. As for me, another of the “92 club” visited for a bargain price and (unless I get another cheap/free ticket) my only visit to the Emirates. A nice ground, but it felt throughout the match that I wasn’t at the football, but at a well rehearsed show or concert instead. That may just be me, but I was at Dagenham for my previous game, and their Victoria Road ground is only a few miles across the city, it felt a million miles away for the experiences. That’s modern football though, whether you think it’s a good thing or a bad one, that’s really up to you.

Photos from Arsenal vs Shrewsbury Town 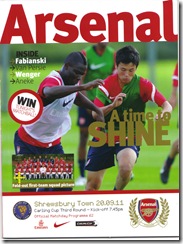