Planning for this game was a mess. Firstly Bamber vs Salford was the original game I had selected for Halloween until Salford’s FA Trophy run meant they now had a home game against Clitheroe and so plans were made to stay at a friend’s in Salford and make a day/night of it. Until the night before as they all bailed out. So on the morning I was faced with the prospect of doing nothing on a Saturday afternoon except grimace at every update from Hearts’ game at Fir Park or go outside and get some fresh air at a game. Although Lancaster’s FA Trophy game against FC United of Manchester was tempting I chose to drive to Bamber Bridge, my original destination, on my tod. 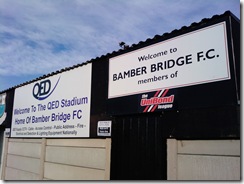 Bamber Bridge or “The Brig” is a small village South of Preston which is about all I can say for the place! It housed an American camp during WW2 which saw some trouble break out in 1943 between the soldiers and locals. Also a small textiles industry was here like most Northern towns but that seems to be about it in terms of highlights for the place. (I’m sorry if I’ve missed anything major out!) Having left Lancaster at about 1:30, I arrived at the QED Stadium at around 2:10 as it was the easiest ground I’ve ever had to find. Parking was also on site and a friendly steward helped me get a space so a stress free journey was complete! The QED Stadium (or Irongate) is a ground I had wanted to get to for some time because of all the positive things I had heard about it. The ground itself has a main stand which is an impressive seating stand that runs down the side of the pitch. Opposite that is hard standing which is where the dugouts are and large nets to keep the balls from flying into houses behind the ground. Behind one goal is a decent covered terrace while the other side is the clubhouse side which has a small covered stand and also a strange balcony area which I presume is the director’s lounge. Bamber Bridge were having a rebuilding season after finishing last season in the Unibond Division 1 North in 11th place. Disappointing from their standards. Currently in 8th position going into this game, Bamber had played so few league games because of playing in several cups (FA Cup, FA Trophy, Lancs Cup, etc) which they had all crashed out of. Their ‘trick or treaters’ (last Halloween joke I promise) to the QED were Ossett Albion who were suffering from an awful start to the season down in 18th place, just outside the relegation places. The Albion from Yorkshire were looking to pick up all 3 points in this “War of the Roses” battle. 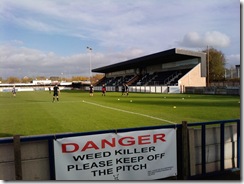 Having watched the end of Arsenal’s 3-0 win over Spurs in the great clubhouse, I walked around the ground taking pictures before taking a seat in the main stand as I felt incredibly lazy and could not be arsed standing up today. The game kicked off with both sides looking fairly even although Bamber had an early chance to take the lead when a free kick from the right was dropped by Ossett keeper Lee Ashforth but the two Brig strikers could not react in time. From then on the game was played very competitively but with few chances as both teams were not using the width of the pitch to full affect. The game needed a bit of magic or stupidity to break the deadlock and we got one of them on 24 minutes. Thankfully it was a moment of magic. Ossett right winger Steve Smith picked the ball up in the corner and skipped by one poor challenge before he proceeded to rip the piss into the whole of Bamber’s left side with two nutmeg’s and skipped past another challenge before his shot was saved by Mike Hale but diverted into the path of Nathan James who smashed the ball into the roof of the net to make it 0-1. Bamber nearly equalized straight away as a great ball in found Phil Eastwood who’s acrobatic attempt was well saved by the Ossett goalie. The rest of the half was basically a non-event with some silly fouls and a yellow card for Ossett’s Martin Allison. Not many shots either apart from long range efforts and hit and hope. Off to the tea-bar at half-time for a good pie! 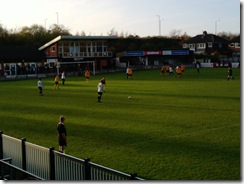 The second half started much like the end of the first, with a lot of effort but no real quality as Ossett tried to extend their lead but a lack of final ball let them down. It wasn’t happening for Bamber either with the game seeming to pass most of their players by. Only a deflected shot wide was their only shot of note by the midway point of the 2nd half until a mental 3 minutes would shape how this game would end. Firstly, Bamber finally got behind the Ossett defence and a great ball in was well saved by the Ossett goalie, however before a Bamber striker could get to the rebound, Ossett defender Kyle Cook decided to use his hands to get the ball away. Woops! Red card and a penalty to Bamber. The drama continued however as a lot of the Ossett team had surrounded the referee and Martin Allison must have said something too much as he was shown a 2nd yellow and Ossett were down to 9. Allison came off the pitch in disbelief telling the main stand, “I wasn’t the one that said owt!” Who knows. Bamber striker Phil Eastwood smashed the penalty home on 78 minutes and Ossett would need to hang on for 12 minutes to claim a point. The final 12 minutes were Lancashire’s re-enactment of the Alamo as Bamber bombarded the Ossett goal and were a final touch or more self composure away from taking an undeserved 3 points. In the end both sides were unhappy with the result. Bamber ruing the missed chance to beat 9 men, Ossett angry that they ended the game with 9 men as one fan shouted at the referee when leaving the pitch. An entertaining finish. 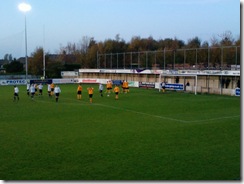 An enjoyable day out in Bamber Bridge as the game livened up towards the end. Bamber Bridge have shot right up the list of favourite clubs as every single person there today was friendly and helpful which makes the club so great. A decent ground and a great clubhouse (who are well known for their real ale’s but Lancashire Constabulary would have something to say about driving after drinking some of that!) makes the club a great one to visit. I recommend doing so! Another great advert for the Unibond League. Just a shame Hearts had to spoil the day with yet another pathetic performance at Fir Park. 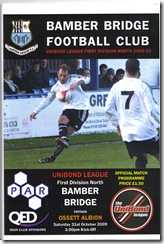