It had been a while since I watched my only Youth Cup match (at Blackburn) as I had waited for a really interesting match up to take place in the Youth Cup after that. Last season Dulwich Hamlet’s Youth Team got all the way to the 3rd Round of this competition before they were beaten by big boys Newcastle United 6-2 at their Champion Hill ground. This season, Dulwich had gone on a good run again and got another Football League side in the form of Oxford United. Down to the Hill I go! 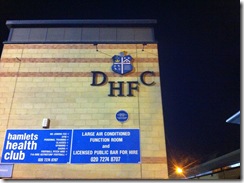 Dulwich is an area of South London and consists of East Dulwich, West Dulwich and Dulwich Village. The first documented evidence of Dulwich is as a hamlet outside London in 967AD, granted by King Edgar to one of his thanes Earl Aelfheah. The name of Dulwich may come from two old English words, Dill, a white flower, and wihs, meaning a damp meadow, giving a meaning of "the meadow where dill grows". In 1538, Henry VIII seized control of Dulwich and sold it to goldsmith Thomas Calton for £609. Calton's grandson Sir Francis Calton sold the Manor of Dulwich for £4,900 in 1605 to Elizabethan actor and entrepreneur Edward Alleyn. He vested his wealth in a charitable foundation, Alleyn's College of God's Gift, established in 1619. The charity's modern successor, The Dulwich Estate, still owns 1,500 acre in the area, including a number of private roads and a tollgate. In the Second World War, Dulwich was hit by many V-1 flying bombs and V-2 rockets. A possible explanation for this is that the British military when announcing V-1 and V-2 explosions deliberately gave map co-ordinates four miles north of the truth in an attempt to protect densely populated central London and focus the drops on the open spaces in the suburbs instead. Today, Dulwich has its 3 distinct areas and remains a diverse and popular part of London. 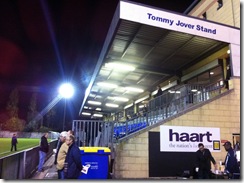 The senior side of Dulwich Hamlet are currently having an excellent season in Isthmian Division 1 South (as I write this they are top of the table). Founded in 1893, their famous pink and blue colours have seen them play in front of 20k+ crowds, saw the start of many a professional’s career and reach the FA Cup 1st Round (last time in 1998). Dulwich moved into their renovated Champion Hill ground in 1993 (the old one had to be demolished in 1991) as part of a Sainsbury’s development of the area (their ground is right next to one). The main feature of the ground is the Tommy Jover Stand (pic above) which houses all the seats and the club’s clubhouse in the top of the stand. Opposite this is a covered standing area while the rest of the ground is uncovered and standing. Its a great wee place and the ample room for everyone and between the standing areas makes this a place I would happily go back to. It’s also popular as Kent League side Fisher FC play here whilst trying to get somewhere themselves as well as Millwall Lionesses LFC who play in the Woman’s Premier League Southern section. 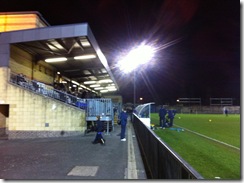 While this was a good time for the Dulwich Hamlet youth side, they have had a long history of professionals playing for them and coming up through the youth ranks. George Elokobi, Simeon Jackson, Marlon King, Leon Court and even Alan Pardew have all come through the youth ranks at the Hamlet. The next big star appears to be in the form of Michael Chambers, captain of this youth side. Apparently, Man Utd to Bristol City are all interested in him and are monitoring his progress. From what I can find on the interweb, Dulwich Hamlet Under 18s play in Bexley & District Junior Football League where they are currently in 7th (out of 14), although have games in hand on everyone due to their FA Youth Cup exploits. Their run in this season’s competition had so far seen off; Molesey (4-0), Welling United (5-2), Whyteleafe (3-1) and then Ebbsfleet United (2-1) in the 1st Round. Oxford United’s Youth play their football in the South West Football League Youth Alliance were they are towards the bottom in 8th place (out of 11). They had entered into the 1st Round and had beaten Cheltenham Town 3-1 to get here. The winners were at home to Bolton in the next round, big game. 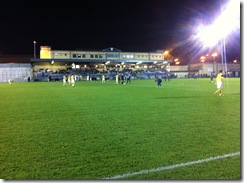 Game kicked off with Oxford taking the game to the home side and after only 5 minutes they took the lead. From an Oxford corner, Cole Hinchliffe forced home goalie Sean Bazell into a good save but Tyrone Marsh reacted first to give the away side the lead. I’ll be honest, after this I did fear for the Dulwich youngsters as an early goal could have wrecked their confidence. However, the Hamlet started peppering their goal as Shelton Frimpong smashed a long range effort which was well saved by Daniel Lincoln and then he saved again from a free kick to keep it 0-1 at HT. 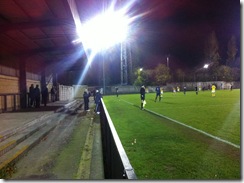 The 2nd half was then just 45 minutes of pure entertainment. Both sides had chances one after each other as all 138 spectators were gripped as Dulwich went for the equalizer while Oxford just needed one to kill the game off. The away side started a bit better as Marsh should have added a 2nd when he was put clear, but lacked the composure after doing all the hard work and fired wide much to the amazement of the crowd. Dulwich themselves had some glorious chances to get them back into the game with Chambers doing some excellent running which showed why a lot of top clubs are after him. Frimpong then had an excellent chance as his pace got him away from the Oxford defence but he sliced his shot wide when he looked good to score. The last 5 minutes were held up when home goalie Bazell collided with an attacker and was stretchered off with a serious looking injury. (Hopefully not too serious, he had played well) On came Emmanuel Oweyemi who apparently isn’t a goalie but made a great low save to keep them in it. Sadly though for Dulwich and underdogs everywhere, Oxford got the all important 2nd right in injury time as they turned timewasting into a textbook goal. With a free kick down in the corner flag, it looked as if Oxford would just play keep ball. However when the two defenders came at the Oxford defender, he lofted the ball over them and sent Jermaine Udumaga on his way who fired a half volley past the goalie and sent them to the 3rd Round to play Bolton. 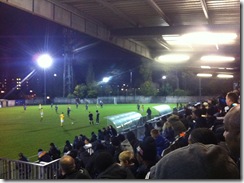 This was a great game and an excellent evening out at the Dulwich. Great ground? Check. Entertaining game? Check. Good referee who didn’t take any of the rare dissent? Check. I need to go to more Youth Cup games as you can see some of the stars of the future before they hit the big time and the matches are normally played in the competitive but fair spirit. I intend to come back to Dulwich one day to see the senior team so good luck to the whole club and good luck to Oxford United in the 3rd Round when they take on Bolton Youth.

- Programme: N/A – not their normal issue, was good enough though 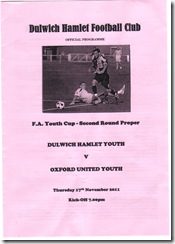