Most people for a “New Years Resolution” will try and either take up exercise or “get fit”, lose weight, etc. For my first game of 2011, I would see a group of people who were absolutely on their peak fitness. They’d have to be as they represented the Royal Marines – the amphibious infantry part of the British Royal Navy. As a Royal Marine base was near me in South Devon, and home to Royal Marines AFC – the footballing machine of the Marines, I popped down to see them potentially hand a beating out to some civvys in their Throgmorton Cup 3rd Round match. 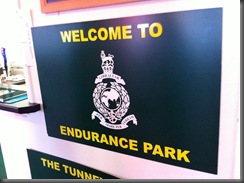 The Royal Marines were formed as part of the Naval Service in 1755, but can actually trace their history to 1664 when English soldiers went to fight the Spanish at sea to stop the Spaniards reaching Gibraltar. They have had an illustrious history before and after their creation as Royal Marine Commandos in 1942 and hold the title as the first ever military unit to perform an air assault insertion by helicopter during the 1956 Suez Crisis. Today, under the ‘leadership’ of HRH Queen Elizabeth II, the RM Commandos are based around the country in Taunton, Plymouth and Arbroath amongst other places. The camp at Lympstone, Devon is a training camp from what I can gather and so it puts the Marines through some of the gruelling training exercises such as 9-mile speed march and the Tarzan Assault Course which really sorts the men from the really physically fit men. 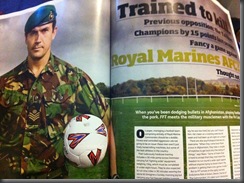 The football section of the Royal Marines are also really on the up currently. Smashing their way through the Navy FA in the Navy competitions they are now seriously starting to challenge other local civilian clubs in the Southwest. Having won the Southwest Peninsula League Division 1 East last season, the Marines are now playing in the SWPL Premier and have settled reasonably well after a dreadful start and found themselves in 10th place and a comfortable 13 points clear of the drop. Royal Marines AFC have also been attracting attention nationally as (picture above) they had a feature about them in January 2011’s FourFourTwo magazine which followed them during a routine 2-0 home win against lowly Wadebridge Town. The article commented about how the team are looking to qualify for the FA Cup and would anyone want to play them……? 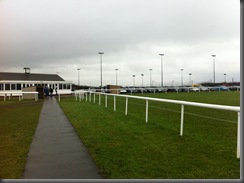 Sadly for two reasons that won’t be happening for a while. Firstly their ground Endurance Park does not have floodlights – a requirement to enter FA competitions. (They could groundshare I suppose at nearby Exmouth Town) Endurance Park is a decent ground opposite the Marine base and around a 15 minute walk from Exton station. A small, but cosy clubhouse is in one corner of the ground that sells some decent food too as I nailed an excellent pasty before the game. To the side of each dugout is the covered seating stand. (Pic below) which I sat in for the whole game due to it peeing down once I arrived! The rest of the ground is a mix of hard and grass standing with it being railed off all around. As around the ground is a complex of other pitches such as hockey and rugby, it does suggest that expansion could happen and floodlights may one day be installed. 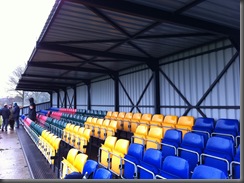 The Throgmorton Cup is the SWPL Cup as only members of the 3 SWP Leagues can enter. Buckland Athletic are the current holders after winning it last season and are still in the competition, although are yet to play the 3rd Round tie at Penryn Athletic at the time of writing. Royal Marines to reach here, had dispatched of Cullompton Rangers (4-2) and Budleigh Salterton (2-1) to finally have a home game this season. Their opponents were fellow Premier Division side Witheridge who after seeing beat Tiverton in 2010/11 pre-season had undergone changes after sacking manager Warren Patmore following a poor start and were right down there in 16th place (out of 20). They struggled past Division 1 East side Bickleigh (2-0) to reach here and were looking for something to spark their season back to life. 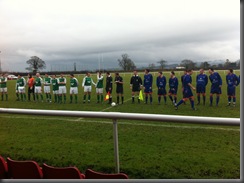 Under the cover, I had inadvertently sat with the Witheridge subs and some management staff as clearly the Marine dugouts were a tad small. I was intrigued to see the Marines play and see if any of their training would do them good. Early on it did appear that they were the stronger side as the had the early possession and pressure but couldn’t do much with it with Martin Finneron and Richard Hope up front trying to feed off scraps. Despite that, Witheridge should have been 1 up on 13 minutes when they closed down a clearance from the Marines and the Withy striker ran through, but shot just wide. After this though, the Marines stepped it up and began creating the better chances and deservedly took the lead on 39 minutes. From a corner, Witheridge could not clear the ball at all and when another ball was put in for what seemed the 4th time, Wearing in the Withy goal went walkabout and Finneron was at the back post to slam home a diving header to give the Commandos a 1-0 HT lead. 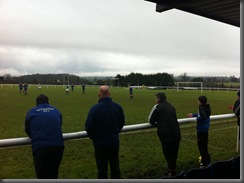 Whatever Withy boss John Cornforth said at HT, it worked as Withy came out the much better side and created two excellent chances early on which Marines goalie Laim Jones did well to keep out. However on 59 minutes, Witheridge’s goal scoring machine Steve Ebdy crashed home an equalizer after good work down the right found him with a low cross and his shot smashed off the bar and in. From then on, Witheridge were still the better side but the game became niggily and both sides were getting bogged down in the midfield area. As Throgmorton Cup games are settled on the day, I was preparing myself for Extra Time when on 82 minutes, O’Brien received the ball in the area after some good holdup play by Hope and he curled the ball away from Wearing and Royal Marines snatched the lead and saw out the remaining 10 minutes or so with ease. 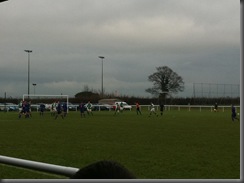 The Marines now have a Quarter-Final tie against Teignmouth or St Blazey at home. The Teignmouth game is set to be played 5th February and it will be a game I am hopefully at! As for this game, it was a decent, albeit rainy start to 2011. A much better experience than I was expecting and with the Marines on the up, could be playing a much higher level of football in the future. The Commando. ITS A STATE OF MIND.

Photos from Royal Marines vs Witheridge 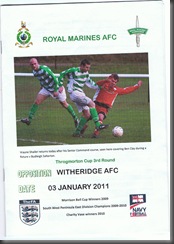