My 2nd part of 3 in 3 was to finally meet up with the SWPL Hop for the 3rd game of their trip with a to a ground that in the past I had been thwarted getting to on several occasions. For this game though, the sun was shining, a massive crowd was expected and I was finally getting to Happy Meadow. The home of Bickleigh FC. And I couldn’t wait. 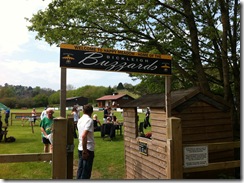 Bickleigh is a small town in mid-Devon just a few miles south of Tiverton. According to the 2001 census, the village had a population of 239 which means for this Hop game, exactly double the amount of people in the village attended. Bickleigh is home to Bickleigh Castle, the village manor house formerly known as Bickleigh Court, has a Norman chapel and baptismal font. And Farmer Nick Lees and his family have constructed several maize mazes in a field near the village. The subjects include Elizabeth II's Golden Jubilee, the 200th anniversary of the Battle of Trafalgar, the bicentenary of the birth of Isambard Kingdom Brunel and 100th anniversary of the Scouting movement. It is also the location of one of the biggest vineyards in the South West of England, Yearlstone, which has a state of the art winery, winebar and cafe. Yearlstone is now 3.5 hectares, and hosts Devon Wine Week in the last week in May each year, a celebration of local food culture. 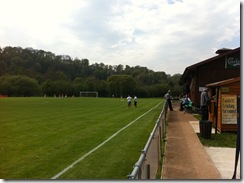 Yearlstone overlooks Bickleigh’s Happy Meadow ground in the quant surroundings of Mid-Devon. A team really on the up, their ground shows it and it was great to see the club had really made the effort for arguably the biggest game of their history. The main, permanent, facilities were down one side as a fantastic wooden chalet type building held the changing rooms along with some covered seating thanks to the wooden roof overhanging down the side. There was another area of seating covered by a similar overhanging roof from a metal structure towards the far goal. Food was available from the small tea hut in shot which I believe was available for every game. Behind one goal for this game though was a beer tent, BBQ (again couldn’t indulge in due to Lent) and hopper legend Rob Hornby’s programme stall with all proceeds going to charity. With hard standing in some of the areas, this is a fantastic ground in a wonderful setting. It really was worth the wait. 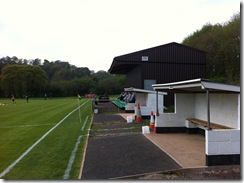 I had seen Bickleigh twice this season, in two away games (at Exeter Uni and Axminster) and they are an improving side. After finishing rock bottom in 2009/10, they were going into this game up in 12th (out of 16) on 31 points, well ahead of Axminster Town in rock bottom. Clearly improving on every season, it will be interesting to see how high this tiny village team can go. A promotion challenge to the SWPL Premier is still a few years off, but would they even want to go up? Possibly quite happy playing some fun football in Division 1 and getting decent crowds, they may have found their perfect level here. They welcomed Appledore from N.Devon who have also been playing at this Level (technically) for donkey’s years. Formed in 1912 as Appledore & B.A.A.C they played most of their football in the N.Devon regional leagues before making the step up in 1978 to the South Western League. In 1996/97 they joined the Devon County League which then lead them to the SWPL Division 1 East when that was formed in 2007. They do not have floodlights at their Marshford ground so cannot be considered for FA Comps currently. Success has come by their way though as they picked up the Devon FA Premier Cup last season, although crashed out in the 2nd Round this season to Exmouth Town. In 6th place coming into this game on 45 points, they were on the cusps of a promotion challenge if they can get the form sorted out in the future. 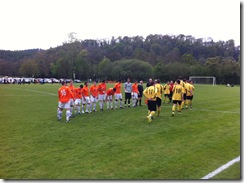 As the game was kicked off by ref Larry Cousins, one thing I noticed straight away was despite the 478 strong crowd in attendance, the atmosphere was quite flat as people just chatted away to each other whilst watching the football in a very respectful manner. So with a “Hop Atmosphere” Bickleigh made the early chances as they were wanting to show the crowd what they could do. On 5 minutes it should have been 1-0 when a great through ball saw Jordan Copp hit the opposite post as he rolled his shot onto it and then the rebound was smashed over from about 10 yards as the Bickleigh management stared in disbelief as they were still level. Then Larry Cousins got involved and handed out a needless yellow card to a Bickleigh player from a tackle that I actually thought was fair. This got Larry a lot of stick, including from Appledore manager Geoff Copp who was telling him so on the touchline. This made the rest of the half fairly niggly although Appledore did have a header cleared off the line from a corner. While it was 0-0 at HT, a lot of hoppers were looking at their no 0-0 games run crashing to a halt here. 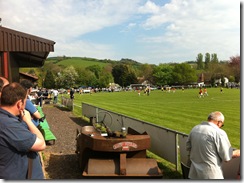 2nd half started exactly as the first with Bickleigh taking the game to Appledore in an effort to try and find the opener. Bickleigh again blasted over in the box after some good build up work with another groan from the 400 odd hoppers here as that 0-0 was drawing closer. Then on 52 minutes, the home side struck. A through ball completely caught the Appledore defence out and Kieran Rapo easily finished past Appledore goalie Jimmy Thorne to make it 1-0. A goal! Appledore then woke up, and started to batter the home side. Firstly James Bateman shrugged off some weak marking in the box to fire a shot at Ben Mercy and then a couple of minutes later an Appledore defender had a header that hit the bar after Mercy and a couple of his defenders had gone missing at a corner. The warning shots were coming and it was no surprise on 66 minutes when they fashioned an equalizer. A great ball in from the right missed the first set of players but Appledore’s top scorer Richard Hevingham lashed home a half-volley to make it 1-1. Both sides did go out for a winner although only one real chance was created which was a low shot from outside the area which was well saved from Thorne. 1-1 it finished, a fair result. 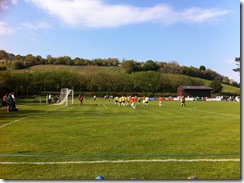 Maybe it was the sun, maybe it was the crowd, maybe it was even the half pint of cider I’d had but this was a fantastic day out. The ground really is a must see, in a fantastic setting with every club member I spoke to a friendly one. This may be a different thinking if you go on a grim and wet day but with adequate cover at Happy Meadow, this shouldn’t be a problem. As for the hop, nobody spoke to me. (Haha!) But I still had a good time listening into conversations about hopping and grounds to see. I had been a bit concerned about going to games with a fluctuated crowd but it was a good experience and I went to carry that on the next day with my final “3 in 3” game at Camelford. As for Bickleigh, go visit, you won’t regret it!

Photos from Bickleigh vs Appledore 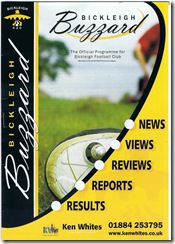