Within every group of friends at school, college or university, you always have one, that is a little weird. One that doesn’t actually like football. We had one of these peculiar beings within our friend group at university until one day he told me that he indeed liked football and even supported a team, AFC Wimbledon. Wanting to go to watch some of the Dons Northern league games this season and not go on his own, I offered to go to the new English county of Atlantis (formally known as Cumbria – although the weather was fine when we went) to see Wimbledon take on Barrow as part of a possible Dons double this season. (Possibly off to a fancy dress party in Gateshead in April) Normally I travel to games by car and so miss a lot of the pre-match build up fans have on the train but anyone who has driven to Barrow-on-Furness will understand why I didn’t fancy driving down the ONLY road to get into the town and so me and my pal took the train. Getting on the train at Lancaster, we were both surprised by the large amount of Dons fans on the train including a group of 4 lads who had decided to make the 285 mile journey with coloured lycra covering the whole body, including their faces. Top effort, sadly I didn’t have the bottle to ask for picture of them. 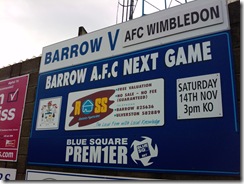 The train journey was also an experience including a whole carriage rendition of Rod Stewart’s “Sailing” when going over a bridge over Morecambe Bay. We arrived into Barrow with good time and made our way (once we picked up another fan – his Dad) to Holker Street. Barrow-in-Furness is an industrial town and seaport in Cumbria which did used to be part of Lancashire until 1974. Barrow then became a major exporter of steel during the industrial revolution and then became a major shipbuilder which is still in evidence today, as town is the largest manufacturer of submarines in the UK. Since most of the shipbuilders have left, unemployment has become a major part of the town and so it is hoped a new regeneration plan can help the town as its needed. The place is quite grim, although I have been to worse places. (I’m looking at you here, Newport) The town’s main team, Barrow AFC were members of the Football League until they dropped out in 1972 and have floated around in non-league football since. In 2008 they were promoted back to the ‘top-flight’ of non-league, into the Blue Square Premier where they have struggled being a part-time club and spent their 1st season narrowly avoiding relegation. This season has seen an improvement and they went into this game in 16th place (out of 24) but a good 9 points clear of relegation. Their ground, Holker Street is set amongst the picturesque background of Cumbrian mountains and is a fairly decent ground with lots of character. The home fans have two covered stands to chose from which both run down the side of the pitch – one is a seated stand and the larger stand the other side is terracing. Away supporters get an uncovered terracing area (shown below) that is behind one goal and also has two corner sections that could also be stood in. Behind the other goal was a tiny standing area, but was taken up by the club’s office building and bar. 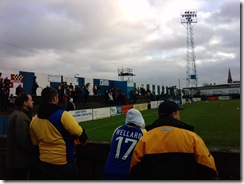 AFC Wimbledon are (in)famous in the non-league as they were the club born out of the relocation of the old Wimbledon FC who moved to Milton Keynes to become MK Dons. The club’s supporters were not going to let the Wimbledon name die and so set up their own club in 2002 and have risen up the leagues since then and clinched promotion into the Blue Square Premier for this season by winning Blue Square South in 08/09. A great amount of Dons fans had made the trip up to Barrow (337 of them) and were in good voice just before kick-off when the club’s management team came over to thank them for making the long trip. However as soon as the game kicked off, it was clear that the Wimbledon players did not fancy the cold (and slightly) wet conditions as Barrow over-ran them completely early on. It also didn’t help that when Wimbledon got into good positions in the Barrow half (that were few and far between), a hopeless ball or poor vision meant that Barrow easily got the ball away. It was no surprise then to see where the first goal went and summed up the Dons performance perfectly. Jon Main had the ball well inside Barrow’s half when an awful ball was played straight to a Barrow midfielder who attacked with pace through Craig Nelthorpe who’s cross was perfectly sliced in by Paul Lorraine. Shame he’s a Wimbledon player. 1-0. The rest of the half was a non-event as Barrow easily dealt with everything (and it wasn’t much) that Wimbledon had to throw at them. 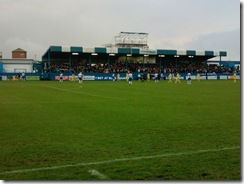 At half-time I bought what I presumed was a burger (my 4th choice) and that now romped ahead into “worst food of the season” as I couldn’t even finish it. And I was starving. We also at half-time met a Sunderland/Wimbledon fan who’s daughter was a Hibs fan (work that one out) and we all agreed that Wimbledon needed to improve and do something fast in the 2nd half to get something from this game. Three minutes into the 2nd half, they had done something. Gone 0-2 down as they had chance after chance to clear a corner and in the end it fell to Barrow’s top scorer Jason Walker who easily passed the ball into the net for a simple goal. It looked now like game over but Wimbledon did still try and battle back into the match. They were also helped by Barrow deciding to take it easy and the Dons sensed this as more chances started to come their way. They did get back into it on 63 minutes when a simple cross was spilled by Barrow “goalie” (I use that loosely – he was shite) Stuart Tomlinson and Elliot Godfrey was on hand to tap in. Wimbledon fans were finding their voice well now and we almost had a pitch invasion on 76 minutes when Barrow couldn’t clear a corner and again Tomlinson instead of trying to make something resembling a save, pushed the ball to Jon Main. Only one outcome here and it was 2-2. The final 15 minutes were great entertainment as both sides believed they could win the game as Wimbledon pushed more men forward to try and gain the win while Barrow hit them back on the counter attack. It was Barrow that came closest to snatching the win when they won a late free kick and Nelthorpe’s shot hit the post and heaven knows how Jason Walker then missed as Wimbledon just managed to get it clear. Wimbledon will be delighted with this point in the circumstances. 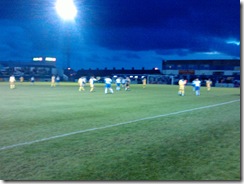 Quite easily the most entertaining of the games I’d seen this season, and it was also great to travel with the Dons fans from Lancaster. Holker Street is a decent ground that could be redeveloped if needed, although I can’t ever see myself going back to Barrow now that I’ve been here. So this fancy dress away day in Gateshead on April 24th??

Photos from Barrow vs Wimbledon 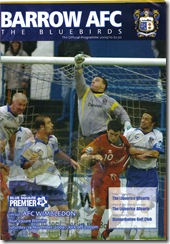