Quite a “end of an era” game for me, and for Morecambe to (maybe) finish an epic 2009/2010 season. Morecambe and Christie Park has dominated my football watching whilst at university in Lancaster since a rainy Tuesday evening during my Fresher’s Week, I forgone the opportunity to get drunk and went to watch Morecambe vs Stockport County. A double from Carl Baker gave the (at the time) struggling newly promoted side the victory and I was hooked. I’ve been back many times since and was always going to go to the final game at Christie Park, although Morecambe’s recent fantastic run meant that they could secure a play-off spot and give Christie Park one final game in the play-offs. So myself and two uni friends took the short drive to Morecambe to potentially say goodbye to an old friend. 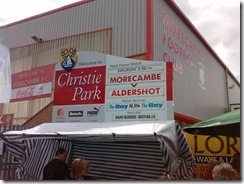 Morecambe is a seaside resort town in Lancashire that faces Cumbria and runs into Morecambe Bay. As with all seaside towns in Britain it seems, its best days were just before and just after the Wars when Morecambe was a thriving resort and even hosted Miss Great Britain beauty contest between 1956 and 1989. However the loss of two piers and the universal decline of seaside towns means Morecambe is now a wee bit of a dump. It was also involved in a legal case with Noel Edmonds after The World of Crinkly Bottom was closed after being open for only 13 weeks. One big highlight of the town is one (and maybe its only) famous son’s Eric Morecambe or Eric Bartholomew who died in 1984. The great comic is still remembered fondly round these parts and Morecambe play “Bring me Sunshine” before every game. Christie Park is a shabby looking ground that clearly needed either worked upon or to be dispatched and for Morecambe to move home. Sainsbury’s made the decision far easier for MFC by buying the land and ground which allowed Morecambe to move into their new stadium, the Globe Arena in time for the start of 2010/11. Christie Park was named after the President at the time Mr J.B Christie who purchased Roseberry Park for MFC and they in turn named it in his honour. Today CP has 3 standing terraces and a seated Main Stand. The North Stand is where the “ultras” stand and make the most noise. Morecambe fans also believe that it is the best terracing area in non-league and gives League 2 a run for its money as well. Across from that is the Umbro Terrace where the away fans are situated. Down one side is the Car Wash Terrace which behind it is a… car wash! This basic uncovered area is right next to the pitch although if it rains you’re getting wet. The Main Stand also houses a little paddock area for people to stand in too and again is right close to the action. I can’t imagine this ground in the Unibond League and I believe they haven’t done much expansion work since those days, but CP still has a family feel about it and will be sorely missed. 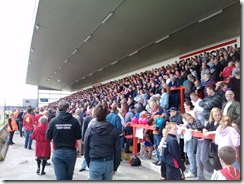 It was a carnival-like atmosphere at CP for this final league game and it was also Morecambe’s highest home crowd attendance since the 40’s. The North Stand (as you can see from the picture above) was already quite packed when we arrived at 2:25ish. Morecambe were also doing a few special events to celebrate this final game, firstly a collector’s programme was on sale at a whopping £8. It was a decent effort though featuring a mass amount of articles and were larger in size than normal Shrimp’s programmes. Also a collection of past legends were paraded on the pitch including my favs Carl Baker and Michael Twiss. A brass band also played songs and we even had fireworks for when the team’s came out on the pitches. No expense spared at Morecambe. There was actually a football match to play as well and quite an important one for the home team and avoiding defeat would see them qualify for the League 2 play-offs for the first time. They took on Aldershot Town who although tipped for relegation had easily smashed through that on their 2nd season back in the Football League and had already qualified for the play-offs so could relax for this game and enjoy the atmosphere. They had also brought a decent amount of fans with them which is impressive considering there was not a lot riding on them for this game and Aldershot is miles away. With the Shots’ fans decked out in summer/holiday gear a real party atmosphere was on as Morecambe tried to delay saying goodbye to CP. 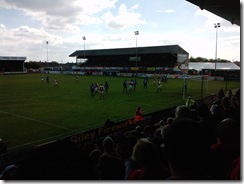 Sadly however, although somewhat inevitable, the game was really a damp squid. Clearly Aldershot did not really care about the result having already booked a play-off place but did have an early chance when Damien Spencer took advantage of a poor back pass but he shot wide from his first time shot. Marlon Jackson also just headed wide from an early chance as Morecambe looked nervous from the large and expectant crowd as they play never really got going. However despite being outplayed for the first 30 mins of the 1st half, a great Shrimps move saw Craig Stanley whip a great ball in from the right and Paul Mullin got ahead of his marker and his diving header was brilliantly saved by keeper Jamie Young. As half-time came Morecambe would scrape into the play-offs where they would meet, Aldershot! The second half was a bit better than the bore-fest of the 1st 45 minutes as we even had a goal on 72 minutes when a long goal kick from Barry Roche found Paul Mullin who took advantage of Aaron Brown’s slip and put through Garry Hunter who easily finished past Jamie Young to put Morecambe in the driving seat for the play-offs. There was no other real goal scoring chances although Shrimps’ captain Jim Bentley angered all of the Shots contingent when he needlessly went through the back of Damien Spencer. It angered Shots boss Kevin Dillon so much that he even interrupted Bentley’s post match interview to have a go. 1-0 it finished and Christie Park will have one final encore! 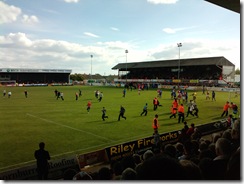 At the final whistle a few dickheads did run on the pitch after MFC did ask fans not to, but they were promptly booed off and no trouble was caused. I fully expected this to be my last game of my epic 2009/2010 season, so I have a spiel ready to talk about how this game and this ground fully fits the end to my university life since my first visit to Christie Park in October 2007. However, I am expecting to get to their Play-off Semi-Final 2nd leg at home to Dag & Red so another game this season is on the cards. And who knows…maybe Wembley!?

Photos from Morecambe vs Aldershot Town

- Programme: 7/10 (collector’s edition, but sadly lacking up to date data) 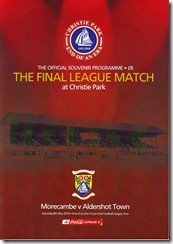