The summer. Everybody’s favourite time of year? Well there is good weather (apparently), holidays (apparently) and just general all round good fun. It is missing something though. And that is football, and proper football. (I await hordes of feminists saying that the Women’s World Cup was proper football). Luckily though this break lasts only for a couple of months and by July we’re back with the matches and I am back with the travelling to the obscure. Before I leave for London, there was one big ground (football wise at least) that I had not yet visited in this area and really wanted to do so before that big move. When I saw then that Cornwall’s finest Truro City were playing a home friendly on a Saturday I had off, it was time to start my 2011/12 season. 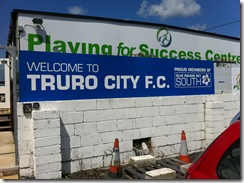 Truro is the most southerly city in the UK and the only city in Cornwall. Truro grew as a port town and then as a major tin mining town for the mining industry which allowed it to prosper in the Victorian era and lead to Truro becoming a place for the rich and famous of it’s time. The nickname “the London of Cornwall” was also attributed to it because of the money around the place. It is also famous for its large cathedral which dominates the city skyline as well as its cobbled streets and Georgian architecture. It really is a lovely place to visit and would recommend a visit down there despite being deep deep down in the SW! 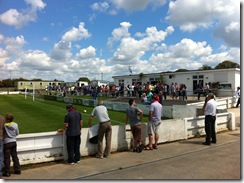 Another reason people are starting to flock to the city is because of a sporting beast that is starting to get some momentum and could really start making some strides in the footballing aspect of England. In 2005/06, Truro City started in the old South Western League (Level 11) which they were then promoted at the end of the season to the Western League D1. They won that in 2007, 2008 they won the Western Premier, 2009 saw them win the Southern League D1 S&W and last season in 2011 they won the Southern Premier to cap an amazing 5 promotions in 6 season to begin life for the 2011/12 season in the Blue Square South (Level 6) – the highest a team from Cornwall has ever got. Backed by the property millionaire Kevin Heaney, money has been pumped into the club but management has still done a fantastic job in getting Truro this high. Life in Blue Square South is really a journey into the unknown as journeys to new clubs await and with bookies offering 14/1 on Truro winning the league – they may well be up there. This was a game I was looking forward to as seeing what chance they might have for this upcoming season. 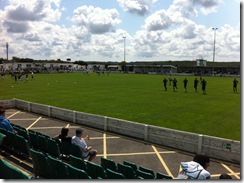 With all those rapid promotions, ground grading is important and so Treyew Road currently is on the temporary stand heavy side currently, although as they consolidate in the higher places of non-league, the ground should take a better shape. On the dugout side is two temporary stands that are uncovered and provide a great view of the pitch which is where I sat for the first half. Across the other side is a small covered standing area which is probably back from their South Western League days when attendances would most likely be under 100. Next to this is a identikit seated stand which was probably put in for their Western League days. Behind one goal is another large temporary stand, although this time covered and at the clubhouse end is just hard standing. It’s a decent ground at this time, but if Heaney puts more money in then it could be a cracker. However, when I was coming into the ground, a petition was going around asking for people to sign for the proposed “Stadium for Cornwall” which Truro City would share with the rugby union side Cornish Pirates. (Info about the proposed ground can be found here) The plans are at an early stage however, so Treyew Road isn’t in danger yet. 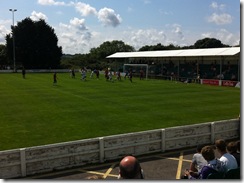 The visitors for today’s game was Premiership new boys QPR who were down in Cornwall playing various non-league sides for pre-season training. Their first XI had actually played the night before this game at Bodmin Town winning 7-0 so QPR for this one had brought a mixture of reserves, no hopers and youth team players. (I would have thought Truro would have provided a better challenge to QPR than Bodmin but never mind). I was interested in hearing the starting line up for QPR and was surprised to hear such names as Martin Rowlands, Lee Cook, Leon Clarke and Angelo Balanta all starting, whilst it wasn’t the QPR side that would line up against Bolton on the opening day, it was still a decent side that had made the trip here. That being said, Truro took the lead on 4 minutes. When some excellent play down the left from Barry Hayles (remember him!?) found a cross which went all the way to the back post, Les Afful slotted the ball home, only just though as goalie Alvin Putnins could not keep the ball out as the it crossed the line and the goal was given. How long could the non-leaguers last? Not very long. When a ball was punted into the box, Martin Rowlands took one touch and turn before being hacked down and a penalty was given. Leon Clarke stepped up and hammered the ball as hard as he could down the middle to make it 1-1. Only 3 minutes later and QPR had turned the game right around. Truro lost the ball in midfield and a brilliant through ball from Lee Cook put Martin Rowlands in and he smashed the ball past Tim Sandercombe into the bottom corner. The rest of the half was great entertainment as both sides just went for it in an absorbing 45 minutes. Both goalies made some excellent saves to keep the score at 1-2 and referee Kevin Friend even played his part by keeping a fairly low profile. 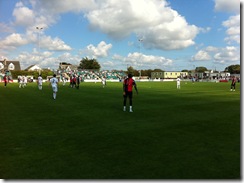 The 2nd half was a lot better than I expected too with the tempo still high and both teams playing some good attacking football. Truro started brightly in trying to get back into the game, but some final loose balls were hindering their goal scoring chances. Then on 54 minutes, QPR broke from a corner and Leon Clarke scampered away before smashing past Sandercombe at his near post to make it 1-3. While I thought this was probably game over, credit to Truro who kept going, although it was clear by now that QPR were the fitter team and had that extra yard on the home side. QPR though were getting scrappy in the midfield area and when Marcus Martin was brought down on the edge of the area Truro had a great chance. The free kick was whipped in Walker and after some pinball in the box, the ball fell to Ed Palmer who smashed home at the back post. Palmer had only signed the day before as he is on loan from Torquay United for 6 months. Palmer though went from hero to villain as he brought down Lee Cook on the edge of the area and up stepped Rowlands (see pic below) who curled a delightful free kick over the wall and in off the post giving Sandercombe no chance. Antonio German came on late on who I was looking forward to seeing. (A lad that is tipped to go far) And he made a few darting runs in the dying embers of the game. QPR nearly added a 5th right at the death when Clarke managed to pounce on a rebound from a corner but just fired wide. It was 2-4 at FT, a very enjoyable game in the sun. 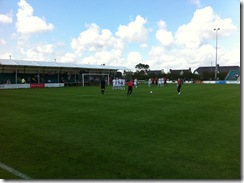 For an opening game of the season for me, this was a cracking match played in the right way and with a great tempo. While paying £10 for a friendly is very steep, I had even forgotten about this price while watching the game between two great teams. For QPR, its tough to say how they will do this season in the top flight, with the team they put out for this game as very few of them will probably be gracing a Premiership ground near you this time out. As for Truro, their boss Lee Hodges admitted that conceding 12 goals in pre-season already (and they are still to play Plymouth and Torquay) is a concern. Good luck to them in the Blue Square South this season, when they come to a London based ground, I will definitely try and see them and see how Cornwall’s finest are getting on. 2011/12, NOW WE’VE STARTED!

- Programme: 6/10 (looks professional and add in some more content and we’re there) 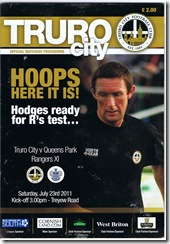