After a disappointing game on Good Friday, game #2 of my Easter treble was easily the most obscure as I was heading out east, to Essex to visit a ground that was actually on its way out. With Hatfield Peverel about to move ground at the end of the season, I rushed over to take in my first game in the Essex and Suffolk Border League and visit this small Essex village for a “relaxing” Saturday game. 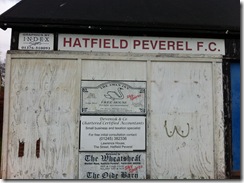 Hatfield Peverel is one of those places you will never ever visit. Unless you get lost or become a nutcase like me and watch football in the village. Hatfield means a 'heathery space in the forest' where as Peverel refers to William Peverel, the Norman knight granted lands in the area by William the Conqueror after the Norman invasion of 1066. It is also the site of a priory founded by the Saxon Ingelrica, wife of Ranulph Peverel and reputed to be the mistress of William the Conqueror, to atone for her sins, and dissolved by Henry VIII. Today, it is well served by rail on the Liverpool St-Clapton on Sea line and (I quote) “has a thriving Scout and Guide organisation with headquarters in Church Road, a Post Office, library, and doctor's and dentist's surgeries.” As you can see from the picture below, it is one of “those” places. But to be fair to HP, I have been to places a lot, lot worse. 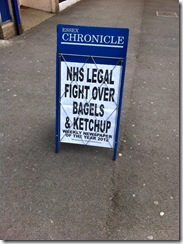 HPFC were formed in 1904 at the local village pub of ‘The Duke of Wellington’ where their ground and changing rooms were based at. The first league they joined was the North Essex League until after World War 1 when they soon graced the mighty Chelmsford & District League, and won a couple of titles at their new ground in The Street which had been donated by a local resident. The Recreation Ground, in Maldon Road, was given to the village by the Strutt family in 1936, and the football club moved onto what is their present ground, complete with the changing rooms that are still there (with a few editions). This became unavailable for a short time after the Second World War as the Rec had been dug up to help with the War effort but HP still continued in the renamed Chelmsford & Mid-Essex League until 1971 when they joined the E&S Border League. By the early 80’s they had really established themselves in the league by reaching cup finals and high placing finishes. 1992/93 saw them switch again, to the Essex Intermediate League but they withdrew in 2001 to rejoin the Border League next season where they still are today. 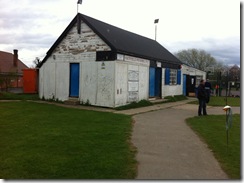 HPFC’s current home (until the end of this season) is the Strutt Memorial Playing Field which is at the south of the village, next to the village hall. More commonly known as Maldon Road (for the road it is located on), I didn’t expect much from the ground having looked on Google Maps. While the pitch is essentially a pitch with some dugouts and rope around, there is a brilliant old school building on the corner which houses the changing rooms and clubhouse(!!) which made this a worthwhile trip. There are some benches dotted around the pitch to also provide some seating for the game, although cover is few and far between if it rains. While Hatfield P are sad to be leaving their home since 1936 (the local parish council have asked them to move off the Rec so it can be used for more informal leisure activities), their new ground at Wickham Bishops Road is apparently quite impressive and with a lot more spectator facilities. The current problem with it though is WBR is on the edge of the village to the east and is down a country lane with no pavement or bus stop nearby. So unless you are trying to prove a point, public transport users may struggle to get here. On the pitch this season, both of these sides (Rowhedge hailing from further east into Essex, near Colchester) were sat in midtable safe from relegation. HP were 8th on 31 points with 7 games to play while Rowhedge were 10th on 28 points with 5 to play. They had also played each other at Rowhedge 3 weeks before this. It finished 0-0. I expected a battle then. 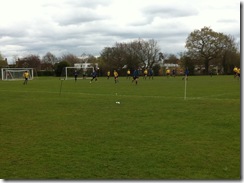 However it quickly became clear that this league really wasn’t for general spectators to enjoy (only nutcases like me) as the quality wasn’t that great as both teams laboured around for 90 minutes. HP had the first shot in anger over the bar after 6 minutes which set the scene for the rest of the game. Rowhedge missed two glorious chances in the first half as Daniel Finch sidefooted wide all alone in the penalty box and then Jamie Catney forced a great save from Paul Rolfe as the the away man turned his defender inside out before getting the shot away. It wasn’t long into the 2nd half when I knew my long run without seeing a 0-0 was going to end in pitiful fashion. Both teams just couldn’t hit a barn door. In fact there were only two real chances created in the half as Finch headed over as another good chance came his way before we had a bit of excitement at the end as Robert Brooks was sent off for a professional foul as a free kick was given right outside the area. It was rolled wide. A testing experience for my first game in this league. 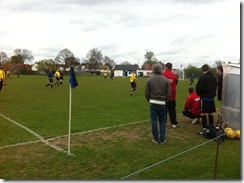 I didn’t really know what to expect from this league but now I know, not a lot. It was a shame really as Hatfield off the pitch were really friendly and were happy to chat about the place. Since this game, HP have really gone off the boil and headed to the beach it seems, with 3 defeats and 1 draw. Rowhedge’s next game was laughably an 8-4 win over Wormingford Wanderers (you couldn’t make that up) before reverting back with a 3-1 home defeat. It was great to also meet up with Trevor P from the Non League Matters forum, who is an experience hopper who could quite easily write a few books with some of the stuff he has seen over the years of doing this. A top bloke. It had to happen eventually as it had been 52 games since my last 0-0. But that run was finally ended here. Never mind. (As I write this, there are only two more chances to see Hatfield Peverel play here. May 1st vs West Bergholt and May 15th vs Newbury Forest. Get yourselves down! You’ll see a better game than I did. Probably.)

Photos from Hatfield Peverel vs Rowhedge