Before heading back down to Devon for the Easter break and the joyful time of revision, I wanted to get one more game in up in t’North as there are some great places I’m still yet to visit up here. After the failed attempt of Nelson on the previous Saturday, I decided to take in some FA Youth Cup action at Ewood Park, as Blackburn hosted Chelsea (a team I secretly like) in the 1st leg of their Semi-Final tie. With tickets also priced at £3/£1, it was going to be a cheap night out regardless how much I got in for. As I had no clue about any of the players I also did a little bit of research on the Chelsea Youth side to see if there were any players I should be keeping my eye on. Jeffrey Bruma – a central defender who has caps for Holland at Youth Level and also has played for Chelsea’s first XI, Gokhan Tore – signed from Bayer Leverskusen in Jan 09’ and Josh McEachran who was captain of England U-17’s were the ones that stood out. So with my scouting done (if they don’t make it at Chelsea, I’m sure Hearts would have them ;) ) I headed off down the short journey off the M6/65 to Blackburn. 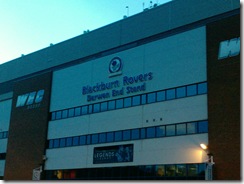 Blackburn is a large town in Lancashire, and like most like towns in this County had its roots firmly in the Industrial Revolution as a former mill town and became one of the first industrialized towns in the World. Once deindustrialization kicked in, Blackburn did fall into decline through economic deprivation and unemployment. Today Blackburn is a growing town, with a diverse community with 25% of the population Muslim which is the highest in the UK outside London. Major landmarks in Blackburn include the Cathedral, Ewood Park (more on that in a mo) and the Italian renaissance style Town Hall. Amongst other things. The main team, Blackburn Rovers play at Ewood Park, where they have played since 1882. The 4 Stands, are all fairly modern with the Blackburn End and Darwen End behind both goals, with the Riverside Stand and Jack Walker Stand running down the side of the pitch. Only the Jack Walker Stand was open for the game, and then it was the lower tier only. The ground looks quite modern apart from the Riverside Stand which looks fairly old and there are plans to rebuild this, although this will only start when Blackburn start filling their ground (so never then). I arrived fairly early to take some snaps before kick-off and managed to take advantage of the ample (and free) parking that was next to the ground. 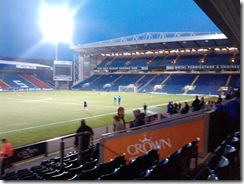 Blackburn Youth had beaten Blackpool (H), Leyton Orient (H), Man Utd (H) and Everton (H) on the way to the Semi-Final, whereas Chelsea had dispatched of Charlton (A), Notts Forest (A), Portsmouth (H) and Watford (A) to get to the Semis so Chelsea had a harder route to get this far, with far more away games played. Looking at the free teamsheet given out (sadly no programme, but a teamsheet would suffice), the 3 “ones to watch” were all starting for Chelsea so I had that to look forward to, whereas I hadn’t researched Blackburn’s Youth Team so I didn’t know any of their players. After nailing a chicken balti pie (so so good) and a Sprite to wash it down and taking a few snaps of the ground, I was ready for kick-off. A bit of a shame that only just over 1300 people had come out to watch this, as the Jack Walker lower tier was full, but an empty 3 stands made the atmosphere a fairly echoic one. Although it was good to hear the players shouts and hear what they were saying. 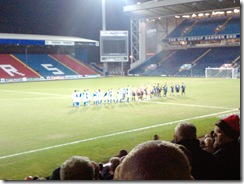 The game kicked off and it seemed a fairly polite atmosphere both on and off the pitch as both sides tried to get a hold on the game. Blackburn were looking to get the ball to their pacey wingers, while Chelsea were passing it around quite well and early on, one to watch, Gokhan Tore was ripping apart Blackburn’s right back Jackson Ramm who was struggling to cope with the two footed Turkish player. Chelsea’s early chances were shots from outside the area as C.Clifford tested the Blackburn goalie early on. A big chance came on 17 minutes however B.Clifford whipped in a ball from the right and Marko Mitrovic saw his header smash off the crossbar and go wide. Chelsea were beginning to get right into this as Blackburn struggled to hold on and the opening goal was surely not far away, on 23 minutes when Aliu Djalo had a shot deflected over for a corner, then from the resulting corner, Jacopo Sala’s corner curled straight past at the near post, which has gone down as a Tom Hitchcock own goal which I feel is a tad harsh as Sala’s corner was great, although Josh Swann in the Blackburn goal must take some responsibility for conceding that. Blackburn did come back into it for the rest of the half as they won several free kicks on the edge of the area but Chelsea goalie Sam Walker (who looks very impressive – one for the future defo) had the crosses easily covered as they led 1-0 at the break. 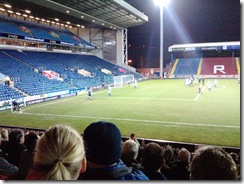 Blackburn went for it at the start of the 2nd half and began getting the crowd going with some decent possession and then creating some good chances. They nearly were level on 51 minutes when Grant Hanley headed from a corner but his shot was cleared off the line by Djalo. Then came the big talking point of the game, Sala, who had began getting frustrated with a few late challenges on himself, had a cheeky late swipe at Josh Morris, which led them to both square up to each other and resulted in a 22 man brawl with even both goalkeepers getting involved. After the dust had settled, two players were sent off, first Chelsea’s Djalo and then Blackburn’s Potts as they had apparently kicked and punched each other in the melee. Sala, who had caused the brawl in the first place was given a yellow card for his late challenge. This wound up the crowd and they began to get right behind their youth team as they began to create a few more chances and were again nearly level when a Hitchcock header made Walker produce a great save to keep the score at 0-1. That was Blackburn’s final real chance as Chelsea began to dominate again and created a few more late chances as McEachran had a shot easily saved as did Sala who also saw his shot well saved. The final whistle went as Chelsea had done the job up in Lancashire, but as the stadium announcer said, “it was only half-time”. 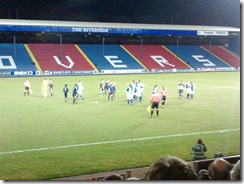 An enjoyable night out in Blackburn then as my first FA Youth Cup game was a decent one, so I hope to take in a couple more of these next season. Also, a shout out to the man on the gate who let me in for only £1 when I asked if the concession tickets were for students too (they clearly weren’t but he was nice). No coat was needed either in a very mild evening, which is something to look forward to for my games (if I get to any) at Easter. The 2nd leg of this game is on Monday 22nd as both sides were try and reach the final where they will face either Aston Villa or Newcastle Utd. Good luck to both sides. 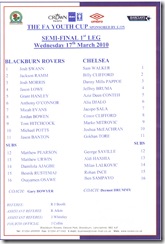