The weather down South after the weekend had only got so much worse and I fully expected this game to be called off, and to no surprise, a pitch inspection was called for this game at 5pm. When the pitch surprisingly passed, I made the slightly lengthy trek down the N.Devon link road and the B3181 to see this intriguing local Mid-Devon derby between Willand Rovers (in the Western Premier – Level 9) and Tiverton Town (in the Southern Premier – Level 7) in the Devon FA St.Lukes bowl. The Devon only club competition which is played every season (I presume, it was near impossible to find the history of this competition) and for me, another new Western Premier ground. 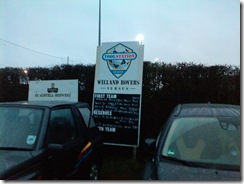 Willand is a small village in Mid-Devon which is fairly near Tiverton, Cullompton and Exeter. Home of the Devon version of Diggerland (what do you mean you’ve never heard of it!?) and thats really all about it. One main road which goes through the village is simply all there is to see. Even Willand’s Wikipedia page is quite desperate with it describing the “only pub in the village” being The Halfway House, so clearly Willand is a banging village that loads happens in. The local team, Willand Rovers play in the Western Premier League and has Wellington (Somerset) as its only nearby rivals. (One day I’ll get there) Willand are doing rather well this season in their league and were currently in 3rd position, 17 points behind leaders Bideford, but did have 4 games in hand over them. A club that also faces a decision soon as they are clearly a leading team in this league, but will they try to make the step up to the Southern League anytime soon? Their opponents, Tiverton were a Southern League side, but have struggled this season and were currently in a relegation battle to avoid the drop to the Southern League South & West. A battle they looked like winning currently in 16th place. 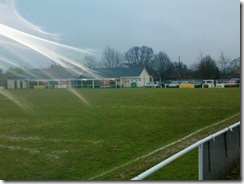 Silver Street – Willand’s ground, (guess what street its on!? ;) ) is a fairly basic Level 9 ground ,with 1 entrance from the main road leading into a ground with a tiny stand on one side of the pitch that holds probably about 50 at most. And then behind one goal is the clubhouse which offers cover, although this was another “members only” clubhouse if you wanted to buy drinks, still not sure why. The rest of the ground is uncovered with is being railed off. Strangely, for non league, this ground had no car park for fans on site, as the small car park next to the clubhouse was for players and officials only. (No sneaking in this time!) So when I arrived in Willand, I found parking in a side street that was a 30 second walk away from the ground and upon arriving in Willand, it promptly started lashing it down. I was already surprised that the game was on, and became astonished when I saw the state of the pitch, or a marsh to properly describe it. I have no idea how this game got the go-ahead, but I’m glad (and the other 191 attendees too) that it did. 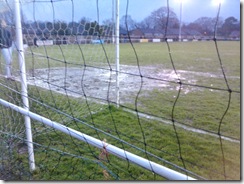 The Devon FA St.Lukes Bowl is a county wide competition that involves all the top clubs from the county with the other smaller clubs having to play in the Senior or Premier Cup. The St.Lukes Bowl is currently held by League 1 side Exeter City after they beat Tiverton Town 2-0 in the final, which was actually played at Tiverton’s home ground, Ladysmead. Already into the Semi-Finals were the holders and fellow Western Premier League side Bideford, with this Quarter-Final still to be played and another between Barnstaple Town and Plymouth Argyle. Due to the erratic nature of this competition, nobody had any idea when or where the final would be played, but both teams had good records in this competition (Willand reached the final in 2007/08) and looked to progress. Tiverton had played on the Saturday and were due to play fellow strugglers Swindon Supermarine on the Wednesday and so had brought a mixture of reserves, youth team and the odd first team player for this game. Willand lined up with a full strength side as they tried to deliver a shock to their higher (and nearby rivals) league opponents. 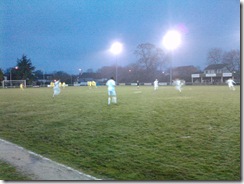 I had chosen to stand in the elements as at Silver Street you got a better view of the pitch when standing down the side of the pitch and the small stand looked packed anyway as Willand kicked off and proceeded to get into Tivvy early on. The pitch, as you could expect did not allow for great football to be played upon it, and both teams who did kick off in a white strip and yellow strip soon found themselves in the similar colour of brown very early on. Willand though took the game to Tiverton and had hemmed them into their own half for the 1st 3 minutes until Tiverton played some delightful passing football that put Sam Box in on the right hand side of the area. When his closest defender slipped he had time to place a shot that the goalie should have saved, but the ball went underneath him to give the visitors an early lead. While some teams would have been deflated at this goal, Willand stepped it up and began battering Tiverton again and they had their bright man in orange to thank, Lloyd Irish in goal, to keep their lead as he made a great save from a corner. Irish could do nothing on 26 minutes though when a drilled ball in from the right found Rob Norrish who sidefooted with power past the goalie to give the Western League side a deserved equalizer. Willand though then shot themselves in the foot big time and gave away a penalty 3 minutes later when a silly trip in the box and Tom Piotrowski put the ball to the right to give Tivvy the lead again. However entertainment was still on hand when the Willand goalie went ballistic a late yellow card was handed out to a Willand player after the penalty was taken for dissent. His rant carried on for the rest of the half it seemed! Willand were also unlucky to go in a half-time behind as Irish saved a great free kick on 38 minutes and made an even better save on half time to deny Willand a 2nd goal. 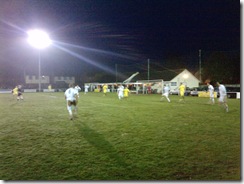 For the 2nd half I moved around to the other side of the pitch to get a different view and mainly to keep warm as it had began spitting and the cold and the wind was really noticeable. The pitch by this time was also just a mud bath and football was extremely difficult to play on when the 2nd half kicked off. The task was made harder for Willand when Simon Hill was shown a 2nd yellow card for a stupid and needless tackle, although this just seemed to galvanize the side and they actually looked better when down to 10 men. They equalised only 3 minutes after the red card when another cross from the right was diverted in at the near post by Dean Stamp and this time Irish could do nothing about it. The rest of half was Willand trying to find a deserved winner, although they still had to be careful when Tiverton balls-ed up a counter attack that should have seen them score. The rest of the chances in 90 minutes were ALL Willand as Tivvy just tried to hang on, I was secretly urging any side to score so to avoid extra-time as I was now so cold I could no longer feel my face. Willand had two great headers saved by Lloyd Irish before the goalie rode his luck with 7 minutes to spare as Willand had two close range shots cleared off the line before in the final minute, Irish produced another great save when an acrobatic turn forced him to divert the ball over the bar. Extra-time it was. 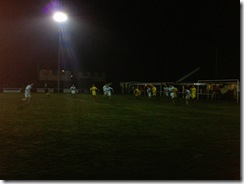 There was a lot of effort in Extra-time, but mass tiredness and the pitch now resembling something like the aftermath of Paschendale meant there wasn’t much to write about. Again, it was all Willand as Tiverton’s strike force were being forced further and further away from goal as they had to defend against the 10 men. In the 1st half on Extra-time a great lob shot found its way over Lloyd Irish but also just over the bar as well. The 2nd half of ET was more incident packed as Willand thought they had won a penalty on 110 minutes when a blatant trip in the area was noticed by everybody in the ground, except the referee. Willand then nearly won it on 120 minutes when Irish again managed to produce a great save on the line as Tiverton had held out for penalties. Only just. It was my first penalty-shoot out ever when I’ve been at the match and saw Tiverton miss their 2nd spot kick when Alex Sanderson saw his penalty well saved. However Willand couldn’t take advantage on their 2nd spot kick however as David Steel put his penalty wide. After 5 pens each it was 4-4 and so we went to sudden death as Tiverton’s Jake Wannell easily scored his, it was down to Willand’s Danny Jee to keep them in the tie. However he ballooned his penalty high and well over the bar as Tiverton managed to win and meet Exeter City in the Semi-Finals. 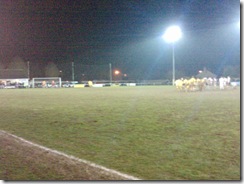 So a long and very cold night in Willand as Tiverton were extremely lucky to get through, but if you don’t take your chances… Credit to Willand Rovers though who put in an excellent performance, even more so playing on that pitch. Unsurprisingly Willand’s next two home games were both called off as the pitch had been absolutely battered on the Monday night and the weather made it worse over the week. (I’m writing this on Good Friday). The game was like the Battle of Stalingrad as both sides were not going to give up in the mud and it really wasn’t pretty. But some cracking entertainment and a decent crowd of 192 at Willand (their previous home game vs Welton Rovers had seen a crowd of 72) saw this as I will hopefully see Tiverton again on Easter Monday, in my now annual Tivvy watch.

- Value for money: 5.5/10 (sneaky to charge programme with admission for those who don’t want one)

- Atmosphere: 7/10 (both fans got right behind their teams)

- Referee: A Rodda – 3/10 (lost control and forgot about the conditions) 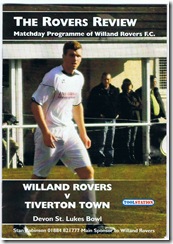