I went to many places in search of football when I was at Lancaster Uni for those 3 years. Some were good, some were bad but a few places I missed. Some are quite small places with little quaint grounds that is just for me, but some are actual glaring misses that really are worth going to. One of the top misses was the Lancashire town of Chorley. Home to the Magpies and a ground I had heard only good things about. Being up in the NW for a weekend, it was time to set that right. 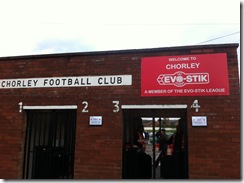 Chorley is a market town in Lancashire and is the largest settlement in the Borough of Chorley. The town's wealth came principally from the cotton industry. As recently as the 1970s the skyline was dominated by numerous factory chimneys, but most are now demolished: remnants of the industrial past include Morrison's chimney and a few other mill buildings, and the streets of terraced houses for mill workers. Chorley, like most Lancashire towns, gained its wealth from the industrial revolution of the 19th century which was also responsible for the town's growth. Chorley was a vital cotton town yet today only three mills still remain working. In the 1970s Chorley was designated as part of Central Lancashire new towns, together with Preston and Leyland. The original aim of this project was to combine the three settlements into a single city with a population of around half a million. Although this never came to pass, and the project has since been abandoned, Chorley benefited from the urban renewal commonly associated with new towns. Strangely, Chorley saw the completion of the largest Mormon temple in Europe in 1998, known as the Preston England Temple. 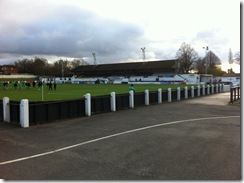 The town’s football club is currently on a high following finally gaining promotion to the Northern Premier League’s top flight last season with a play-off victory over AFC Fylde. Chorley began playing football in 1883 after switching from rugby (good choice lads) and their first game was a victory against Wigan (no surprise). From then till 1968, they played in the Lancashire Combination with few successes from here to there. In 68’ they became founder members of the Northern Premier League before leaving at the end of the season (and rejoined and left again a few times after that). 1988 saw them promoted to the Vauxhall Conference (i.e – the Blue Square Premier – Level 5) and a first season finish of 17th saw them then relegated in 1990 after coming 3rd from bottom and 1 point behind Fisher Athletic. They have never been back since. Doing nothing in the Northern Premier League, they appointed Tony Hesketh in early 2008 and he arguably set the groundwork for the success they are having now with his attractive passing game and good results. He jumped ship to Lancaster in April 2009 but Garry Flitcroft came in eventually in May 2010 and he steered the club to promotion at the first attempt. 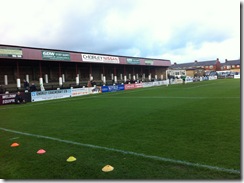 There is trouble in t’mill though. After club accountant Philip Haslam was arrested in September on suspicion of fraud and false accounting. This has led to a massive hole in the budget and Chorley are struggling. They have already had to release Chris Haworth, Nathan Fairhurst and Lee McEvilly to balance the books and boss Flitcroft is now calling on fans to get behind the team and local big boys Blackburn Rovers have also been involved helping the club out. On the pitch however, they seem to be doing fine as they are chasing a 2nd successive promotion up to the Blue Square North and currently sit in a play-off place while the rest of the league chase Chester FC. Their Victory Park home is still also looking sensational. A smashing ground that you really must visit. A large main stand with wooden seats dominates the scene and provides a good view. Behind both goals are two great standing structures and running down the other side of the pitch is an open end with grass banking. Sadly the banking is out of bounds now, but in days gone by, hundreds of people would have come down to stand on the banking and cheer the Magpies on. 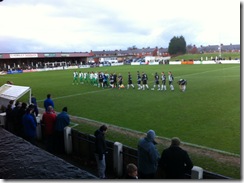 Chorley welcomed the curiously named Dabbers or Nantwich Town for this game. After finishing a lowly 17th last season, Jimmy Quinn seems to be pulling the Dabbers in the right direction again, albeit slowly as they were coming into this game in midtable. Nantwich though, started off brighter as despite Chorley having a healthy attendance for this game, 766, the atmosphere was quite flat and it probably showed in the home side’s play. Around 15 away fans behind the goal nearly had something to cheer about when Ben Mills found space in the box but his shot was poor and the danger was over. After this, the game opened up and Chorley began to create chances with Chris Denham and Tom Williams going close. Jonny Brain in the Nantwich goal looked in good form and with the away side looking toothless up front, this could be a long day, the longer the match continued at 0-0. Nantwich did give Chorley a scare however as a looping header from Mills clipped the top of the bar that would have given the Dabbers a fluke lead. The breakthrough came on 37 minutes though as Chorley were given a free kick on the right and when the ball was played in, Nantwich tried a strange defensive tactic of not defending the free kick at all. This left Wayne Maden to head the ball across goal where goal machine Steve Foster had a simple finish. (Yes, it’s that Steve Foster who I saw score 5 goals at Lancaster in 2009) The rest of the half was scrappy as Nantwich looked like they had ran out of ideas already. Oh dear. 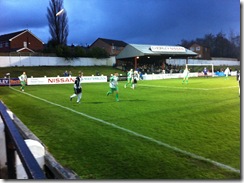 The 2nd half was played under the lights at Victory Park giving an even better look the ground, although the football on display was not the most impressive. Nantwich had a fair chunk of possession but time and time again when they brought the ball to penalty area, they instantly ran out of ideas and the ball was cleared. Chorley were not set up by Flitcroft to play on the counter attack and it was nearly tactics perfection when John Cunliffe scored, but he was way offside. The rain then started to pour and pour (cue some “its grim up north” joke) and the match began to get rather scrappy, especially for Rob McDonald, who managed to fly into two mistimed challenges and get himself sent off. With that, everyone in the ground knew Nantwich wouldn’t be equalizing today (they could be still there now and the ball wouldn’t be going in) and Chorley could play out time for an important 3 points in their quest for that 2nd promotion. 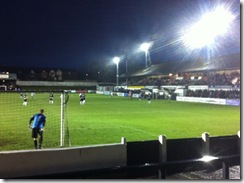 This wasn’t the best game I’m going to see, in fact it will be filled under, “instantly forgotten” and we’ll move on. However, I have now finally got to Chorley and seen the wonderful Victory Park which is a quality place to watch football at. We’ll have to wait and see what happens in the future to the old place, but hopefully the changes (if any come) are not too dramatic. I also hope Chorley can survive and pull through this crisis. After years of doing f-all in the league, they now finally get going only for some nobhead accountant (you can’t trust them!) to plunge them into this. Good luck to them! Nantwich Town, learn to shoot and just generally attack.

Photos from Chorley vs Nantwich Town 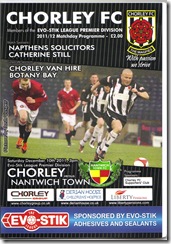