The 2nd part of my Easter double saw a drive to East Devon to visit Tiverton Town of the Southern Premier League in the hope that their game against Chippenham today was far better than the Good Friday dour fest at Bideford. Tiverton is the major town in Mid-Devon (although to me its East) and has seen a recent expansion and development, firstly with the North Devon Link Road that runs just past Tiverton and also the regeneration of much of the town. The main football team in the town are Tiverton Town who currently play in Level 7 of the English Football Pyramid having been promoted from the Southern Division One West league in 2001. They welcomed Chippenham Town to Ladysmead which brought a wry smile to my face when I was planning what fixtures to go see whilst I was down. The reason for that smile is because I lived in Chippenham for 22 months from 2005 so I know the place extremely well. However for some reason or another I had never got round to visiting a game at Hardenhuish Park – the home of Chippenham – so a visit there is on the cards but not in the near future. 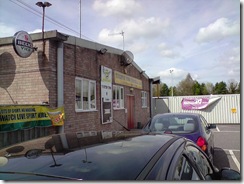 This was the first game I had actually parked my car at the ground and so me and my Dad who chummed me to this game managed to get a good look round Ladysmead. The ground itself I really liked, behind both goals is covered terrace with a snack bar behind the goal nearest the main road, running down one side of the pitch is a covered stand for seating which cost an extra £1 to sit in and at the opposite end is another covered standing section with the entrance to Tiverton’s clubhouse here too. The clubhouse is great with Setanta Sports News on when I was in there reporting on Leicester’s 1-0 win over Leeds to all but give them promotion from League 1. Tiverton were in midtable coming into this game 12th place out of 22. Chippenham had been play-off contenders in most of the recent seasons and had a small chance to sneak into this seasons play-offs until they were deducted 3 points last week for fielding an ineligible player at their win at Yate Town. It now meant that they had to win to keep their small hopes alive and hope the sides above them lost today.

The game kicked off as we stood behind the goal Chippenham were attacking with their fans giving some banter to Tiverton goalkeeper Steve Book (ex Cheltenham Town and Swindon Town player) and Tiverton captain Nathan Rudge (ex Chippenham player) were responding well. However 10 minutes in, Rudge then proceeded to kick a Chippenham player off the ball and only received a yellow card, much to the disbelief and anger of the ‘Nam fans. Tiverton then went a bit mental as the game boiled up and could have been two men down as another two shocking challenges came in before Rudge then clattered ‘Nam striker David Pratt off the ball as he looked last man. Had to walk! No, not even a yellow card shown. This only 15 minutes in. From this free-kick, Chippenham took the lead as a great cross was headed in by ‘Nam captain Ross Adams to make it 0-1. It was all Chippenham as they looked to attack down the wings, yet Tiverton broke down the right and a striker was bundled down to give them a penalty and Tom Knighton crashed it down the middle to make it 1-1. Then Chippenham lost the plot as another bad tackle on a ‘Nam player got them a free-kick and winger Samuel Allison ran over, grabbed the ball off a Tivvy player and then elbowed him in the face. What an idiot and Chippenham were to play with 10 men for around an hour. It didnt matter as they retook the lead from this freekick after Book had made a great save and Pratt hit the bar only for Ross Adams to drive a lot shot into the bottom corner for 1-2. Both teams had chances at the end of the half but Tiverton still felt they were in this match with a one man advantage. 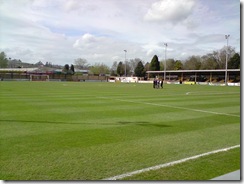 The second half began with Chippenham’s tactic plain to see; defend while trying to hit Tiverton on the break with them being a man down. It allowed Tiverton to come at them and they did with some great crosses being put towards the ‘Nam’s goal including one that resulted in ‘Nam goalie Chris Snoddy having a cut to his head and a long stoppage. Play continued in the same way with Tiverton attacking and Chippenham trying to hit them on the break which they should have done with Seavill missing two 1 on 1’s to put the game beyond Tiverton. Towards the end of the game only some last ditch blocks stopped Tiverton getting a draw that their direct play maybe merited. The final whistle blew with Chippenham winning 2-1, a decent game but the 1st half was clearly better. 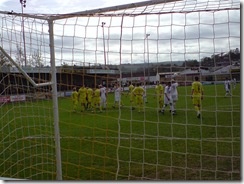 Chippenham’s win meant that they play-off hopes were still there unless Hemel Hempstead Town beat Hitchin Town. They won 4-2. So Chippenham will remain in this league for another year along with Tiverton with both teams feeling that a better challenge for promotion could be made next season. They will be joined by two teams that the fans were talking about today at the ground, firstly Team Bath could make the drop into this division after pulling out of the Conference South, the student team which has split opinion were given a full page article in the programme on their impending demotion or folding altogether. The other team which will be joining the division after being confirmed Champions today will be Truro City which would bring a collective moan from most teams in this division as a 100+ mile trip to Cornwall is on the cards. The game itself was highly enjoyable and although the 2nd half didn’t match the 1st it was still a good day out in the warmth and sunshine (!?) Ladysmead has won the “best kept Non-League ground” award before and it is no surprise as it is a cracking ground with easy access and I plan to make a return next season in the summer.

Photos from Tiverton vs Chippenham

- Atmosphere: 7/10 (good banter with Chippenham fans and Tiverton got right behind their team too)

- Programme: 5/10 (fair enough effort but too many adverts really) 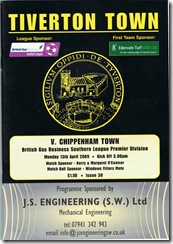 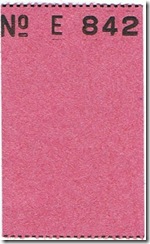