Now coming into the final few weeks of the season I was beginning to get well into the “tidying up” that I had started last week by visiting the closest ground to my house. With a move to London coming in Aug/Sept 2011, Devon reports would be few and far between after that so it was time to visit the closest SWPL ground that I was still yet to visit and so it was a trip to nearby Crediton. Delightfully I had picked a Saturday that the sun was shining and it was that hot it was 3/4 lengths and t-shirt weather! Who says it ALWAYS rains here? 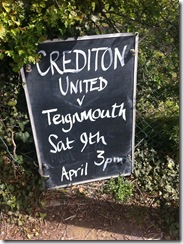 Crediton is a small town just 7 miles north-west of Exeter and situated in the narrow vale of the River Creedy. It is split into two parts, the old town in the east and the new town in the west. The first indication of settlement at Crediton is the knowledge that Winfrith (Saint Boniface) was born here in c. 672. He propagated Christianity in the Frankish Empire during the 8th century and is the patron saint of both Germany and the Netherlands. This is probably why Crediton has a grand church for such a small town with the grandiose Church of the Holy Cross situated in the centre. Crediton pre-20th Century was built upon the large woollen and serge industries but that has now been superseded by show-making and the manufacturing of cider, amongst other things. It has two business parks also, one at Fordton and the larger one at Lords Meadow which is also where the town’s football team currently play. 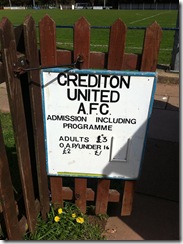 Crediton United are another one of these Devon/Cornwall based clubs that you don’t realise until you research it, that have actually played Western League football in their history. Established in 1910, this was actually their centenary season which was nicely shown on the programme with team photos from down the years on the cover. It was a shame that the cover was a shell and not updated for every game, but that’s just a personal thing. Crediton had first played in the W.League in 1990 when they made the step up from the Devon & Exeter League. After some top finishes in the Western Division 1, they were promoted to the Premier in 1992/93 after a 3rd place finish before dropping back down to D1 3 years later after finishing 18th in 1996. In 1998 they were voluntary demoted down to the Devon County League where they floated around in the lower end of the table until the SWPL was set up in 2007 and they were placed into Division 1 East. After a 14th place last season, Cred went into this game in 15th (2nd bottom) and well behind 14th place Newton Abbot Spurs, but 9 points clear of Axminster Town. With no relegation in this league, this season, Crediton would be safe for now but dropping anymore down the table could see Crediton back in the D&E League. To try and stop this slide, the club announced that ex Yeovil striker and former Wellington and Witheridge manager Warren Patmore would be taking charge beginning with this game. 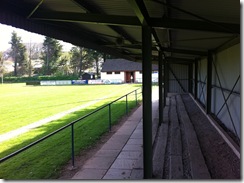 They welcomed South Devon side Teignmouth to Lords Meadow who were in an interesting position due to their games in hand as they could stop promotion chasing Budleigh Salterton from going up by finishing in 2nd place and therefore the final promotion spot. (Top place Liverton Utd secured the title after this game but before this article was published but have not applied for promotion) I had seen Teignmouth once before, in a cracking cup tie earlier in the season and was looking forward to seeing them in action again. Playing in a glorious day at Lords Meadow probably skewed my opinion of the ground slightly, but I loved it. 3 separate areas of cover, including a seated stand (with wooden benches for seats) that provided a great view. The rest of the ground is railed off with hard standing and with floodlights in place, Crediton could easily host a higher level of football should they finally turn the tide and start to rise up the table. 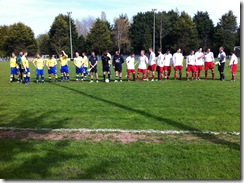 The away side were the clear favourites going into this game (Teignmouth had won the reverse game 2-1 last month) so it was no surprise they came out and made the better start as some balls into the box had Cred goalie Fred Tonkin under pressure as he did not look comfortable at all with crosses. It nearly got worse on 16 minutes when Tonkin ballsed up another cross and Teign’s shot was cleared off the line by a defender. Teignmouth kept plugging away for the opener but were nearly caught on the counter on 29 minutes when pressure up field caused a defensive mistake but Teign goalie Nicky Moyse dealt with the shot well. Then on 37 mins Teign thought they had the breakthrough when a cross from the left handed a header to Teign striker Craig Stonelake who's header smashed off the underside of the bar and then appeared to be only cleared off the line by a defender’s hand. Yet Crediton didn’t learn, they could only clear the ball to the right when Teignmouth worked the ball back into the box where Adam Fay was all alone at the back post who side-foot volleyed past a helpless Tonkin to give Teignmouth the lead. It stayed that way till HT as neither side could create another good opportunity. 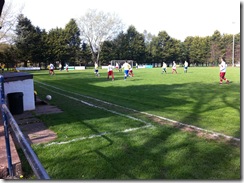 Due to finally having a decent radio app for my iPhone, I was slightly distracted for the start of the 2nd half due to the Grand National and 5Live’s coverage of the race. Maybe Teignmouth were slightly distracted by the race too as Crediton took the game to them and should have equalised early on when a floated free kick found 3 (THREE!) Crediton players unmarked at the back post but the header from one of them was easily saved by Moyse. Crediton kept the ball for most of the half but all I could write in my Travelling Fan notebook was “Crediton are so toothless”. Patmore, a striker in his time really needs to train his strike force up here as Crediton could not hit a barn door, etc. With 5 minutes to go however, Teignmouth were caught napping from a free-kick but Crediton had time to balls up the shot as one of their few clear cut chances was wasted. Right on FT, Teignmouth burst clear and worked the ball to the far right post area where a rasping drive crashed off the stanchion of the woodwork and bounced away. Was it over the line? We’ll never know, but Teignmouth easily held on in injury time to win. 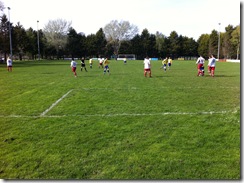 On a beautiful day, I “ticked” another ground that had been a target of mine for some time. Crediton is the opening game for the 2011 Easter SW Hop so if you’re viewing to have a gander at what Lords Meadow is like, I fully recommend the ground. It’s a smashing venue and everyone I spoke to on the day were very helpful. The ground could easily host Western League football again, however with 2 teams expected to come up into SWP Div 1 East next season, relegation would be on the cards again and so Crediton must improve rapidly or they may never get near the Western League again. Teignmouth’s end of season run will be interesting to watch as they try and snatch 2nd place off Budleigh. Their game on the next Saturday (16th Apr) saw them lose 3-2 to Ottery St Mary so they are 9 points down on Budleigh, but with 3 games in hand and 5 to play. It’s all to play for.

Photos from Crediton United vs Teignmouth

- Food: 5/10 (didn’t taste pasties but had enough in cold drinks/snacks) 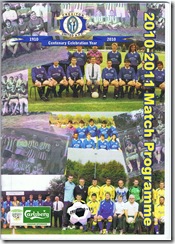