My plan looked perfect, while 95% of the country was thrown into mayhem by the adverse weather (snow) my 1st choice game seemed completely unaware of this. Even as I went to bed on the Friday evening my 1st choice game at Alphington (vs Axminster Town) looked to be going ahead. No pitch inspection had even been planned! Wake up Saturday morning and still no news so I start my prep for getting there, then around 10:30 - “GAME OFF”. Bugger. A scamper around finds that University of Exeter’s match (only 3 miles away from Alphington) has survived so I take the train to their ground in Topsham for a big County Cup match! 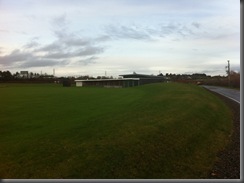 The University of Exeter was given its University status by Royal Charter in 1955 with its main Streatham Campus on the edge of the City Centre. It came 184th in the Times Higher Education Supplement Top World Universities in 2010. Its Vice-Chancellor Professor Steve Smith is current Head of Universities UK – who have recently just got their wish to increase tuition fees to a ludicrous £9000 per year. A not very popular man. Their football team have had some success recently playing in the Premier of the BUCS competition, however they were relegated last season and currently prop up the Southwest Conference Division 1A having only picked up 2 points from their first 4 games. They also play their trade in Saturday football, in the Southwest Peninsula Division 1 East, where they are currently 14th (out of 16) but a safe 11 points clear of no hopers Axminster Town. 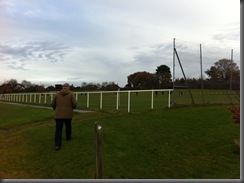 They play on the edge of Exeter at the University Sports Grounds in the village of Topsham which is slowly being sucked into the City of Exeter. The grounds holds a few football pitches, including the main pitch for the 1st team and another roped off pitch for the University 2nd team who play in the Devon & Exeter League. It is a fairly basic venue, with a modern changing room block for the various teams and a refreshment room with vending machines (one which nearly broke my hand) and a little room selling teas and coffees. The main pitch (see above picture) is railed off part the way round with a covered stand on the dugout side and grass bank hills on the other. Because of a tosser of a NIMBY, the team can’t do much to the ground as someone with a house about 80 metres away who objected to a proper stand because it might encourage delinquents and they have no chance on getting floodlights at their Topsham Road ground. Unless this tosser moves out, or dies. 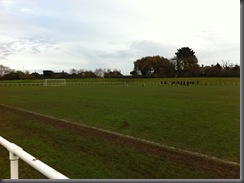 This was the Devon Premier Cup 3rd Round and featured two teams in the Southwest Peninsula Division 1 East League. The students welcomed village side Bickleigh for this 3rd Round tie who were having another good season, only their 2nd ever at Level 11. Currently 6th, the team from Happy Meadow (I will get there one day I promise!) were looking to get to the Q-F’s and with holders Appledore already out, this was anyone’s trophy. The students had dispatched of Okehampton Argyle (6-2) and Buckland Athletic Reserves (2-0) both at home to reach here. Bickleigh had overcame Alphington (3-1) and South Devon League side Upton Athletic (2-2, win on penalties) – this looked to be a difficult game to call. 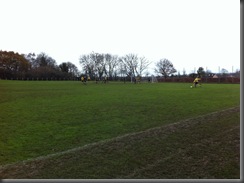 As for the game, it became clear that the University side weren’t that great, probably due to the lack of experience playing in the Pyramid compared to Bickleigh. The Buzzards were well on top and had a goal chalked off for offside and hit the bar from a corner within the first 12 minutes as the home side could not get going. Ironically, as the Uni side got back into the game, Bickleigh went and took the lead. Tom Beddow received a pass on the edge of the area and he curled the ball around Thomas Vinten in the Uni goal. Bickleigh, for all their dominance were lucky to be ahead at the break as on 44 minutes a harmless cross was dropped by Buzzards goalie Danny Lewis and a home striker tapped in. Luckily the whistle had already gone for an offside. The second half was really a non-event with few chances of note. It was the opposite as the UOE pressed early on and Lewis was forced into a top save from a freekick but Bickleigh grew stronger as the half went on and should have added to their total at least once more in the final few minutes. They didn’t, but it didn’t matter. 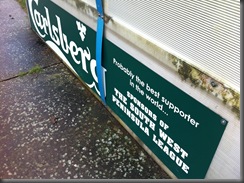 Bickleigh go marching on and have a home tie in the Quarter-Final against Totnes & Dartington or Plymouth Parkway Reserves on 22nd January (weather permitting). As I was lucky to get a game in (probably less than a 100 games played in mainland UK on this day!), I shouldn’t complain. Also nice to see a programme turn up eventually and it was free, so again that was fine. Nice to get another close ground “ticked off” – albeit a basic one and it was nice to chat to Phil Hiscox again from the SWP League. Decent day out.

- Ground: 2/10 (disappointing really, not all their fault though)

- Food: 2/10 (only stuff from vending machines if you don’t like hot drinks) 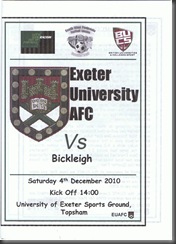