The thing with sitting up late at university is sometimes, with friends, you talk about utter rubbish. Conversation topics that nobody else would understand or care about. Earlier this week, a friend at uni (lets name him Andy) who originally hails from St Helens was appalled at the fact that Clitheroe played in the league higher than his town’s football team. He also joked that imagine a team who play at Level 9 in the football pyramid played at Knowsley Road, one of rugby league’s most popular grounds with a capacity of 17,500. So upon investigation it was found out that they indeed do play at the home of egg chasing in St Helens, another journey was organised to a ground I hadn’t expected to get to this season. 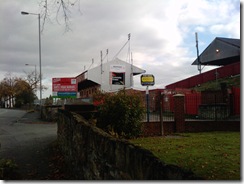 St Helens is a large town in Merseyside that was famous in the industrial ages for being a centre of coal and glass making. Today the town is more of a commercial town with most signs of industry now being dormant with the large amount of chimneys that still are standing in the town but are not in use. The main industry in the town now is Pilkingtons Glass which is a “world leader” in its industry. Another famous presence in the town is the main rugby league team that play there – St Helens RLFC. One of the world’s first rugby league teams, they recently have become a major player in Super League, although having not won a Grand Final since 2006, they have lost the last 3, all to Leeds Rhinos. This town is a major rugby league town, but football is still played here, despite all the plastic scousers normally supporting either the red or blue side of Liverpool. The town’s team, St Helens Town, currently play in the Northwest Counties Premier Division which is set at Level 9 on the English League Pyramid. The league which is sponsored by Vodkat (dunno what that says about Northerners…) and normally feeds the Champion directly into Unibond Division 1 North. (Where last season’s Vodkat Champions, AFC Fylde are currently playing) St Helens were founded in 1946 and have a rich history of producing well known players in English football. Ex players include, Bert Trautmann, Bill Foulkes and Dave Bamber. In fact, Trautmann signed for Man City from St Helens exactly 60 years ago and the club were advertising an upcoming celebration game against a Man City Legend XI in mid-November. St Helens moved from their Hoghton Road ground in 2000 to move in with St Helens RLFC at Knowsley Road and were almost relegated from this league last season, but a late rally saved them and they went into this game in 5th place, 13 points behind 100% leaders Newcastle Town, but with a game in hand. 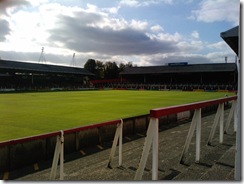 After arriving at Knowsley Road with good time to spare, it took a while for the hardy band of us to find our way in, with only one stand open for football games. When we found the only open turnstiles, there was a strange sight of both teams warming up on the big pitch next to the stadium which is unusual as the rugby league season is finished now until early 2010, so the pitch isn’t needed to be great at the moment anyway. Once in, there was a programme seller almost dumped next to the side of the main stand entrance and with no food or bar facilities open that I could see, it was worrying that I would have to go through the whole game on an empty stomach. We positioned ourselves in the uncovered terraces next to the Main Stand when a steward demanded that my friend take no photos on his proper camera for the match. It meant that most of my pictures for this game were taken ninja style and when no stewards were near us in fear of getting caught. Knowsley Road is an impressive ramshackle ground with two covered standing stands, with an uncovered section behind one goal and to the side of the Main Stand. (More on the Main Stand later) St Helens hosted Lancashire team Nelson for this game who hail from just Southeast of Clitheroe and were only one place behind St Helens in the table, so a close game was expected. The game kicked off in the eerie silence of the empty stands we could see with the only noise coming directly from the players themselves with both teams resorting to long balls to bypass both midfields. St Helens were already getting early joy down their left side when a great ball was crossed in and found Grahame Mitchell who just headed wide. It was 1-0 moments later when Nelson played a too high line that allowed Phil Mitchell to feed the ball through the defence where captain Iain Dyson ran through and rounded the keeper to make it 1-0. The rest of the half was a non event really with St Helens having most of the possession but not really creating the chances to go with it. Nelson also were doing very little and it already looked like the game would finish with only 1 goal scored. However, coming up to half-time a superb through ball was played through to Graeme Mitchell who scored easily with the outside of the boot to make it 2-0 at HT. 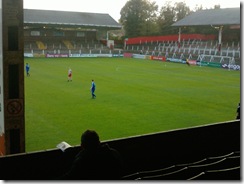 At half-time I investigated the smell of pies in the air and stumbled upon one open food stall where I bought a very decent meat and tattie pie and a bovril for £2.20. Also, again the winning raffle ticket was not mine, although I really wouldn’t know what to do with a bottle of whisky. For the 2nd half I decided to sit in the old main stand on some cracking wooden seats (no pun intended) for a better view as Nelson took the game towards St Helens with a couple of long range efforts that hardly troubled town goalie Graeme McCall. The problem with attacking so much to get back into the game is however that you are left open to a counter attack which is increasingly what was happening at Saints were looking for a 3rd and to wrap the game up as Graeme Mitchell had an acrobatic attempt blocked. Nelson didn’t learn from numerous close shaves when Phil Mitchell got up through on goal again and managed to get a lucky break off a defender that took the ball past the keeper and allowed himself an easy tap in for number 3. Both Mitchell’s scored today, so Peggy will be proud. It should have been 4 on 81 minutes when another break found St Helens outnumbering the goalie 3 to 1. However the first shot was saved and the rebound crashed off the bar and over much to the annoyance of the home supporters. Graeme Mitchell had another chance to get a 2nd when a volley from a tight angle was just fired wide as by this time Nelson had given even trying to defend or remotely play any football. St Helens did add a 4th late on when another 1 on 1 was cut back to Iain Dyson who made it 4-0 and the game was over. An easy win for St Helens. 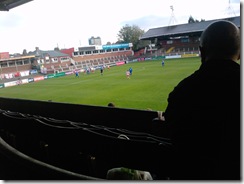 A strange day out then in Merseyside as St Helens picked up an easy 3 points over one of the worst sides I have seen this season. The “match experience” at Knowsley Road for watching football is a strange one, with it almost being like a younger brother is not allowed to touch a lot of his older brother’s stuff. The nomadic existence of the club may hinder the club in the long term, but the money is surely not there for a ground for themselves. Knowsley Road is also set to disappear in 2011 when both teams move to the new St Helens Stadium which will have a capacity of 18,000, a Tesco store and 2000 parking spaces. Maybe, the club might be playing Unibond football by then, but hopefully the club can draw some bigger crowds than the 107 that was in attendance for this game.

Photos from St Helens vs Nelson 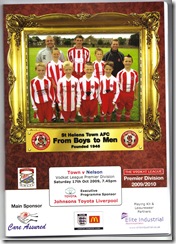