Within my hardy band of friends at uni, there’s me, the Jambo. A Wimbledon fan, a Spurs fan and a Rochdale fan. (He’s the loudest currently). As I had been to a Wombles game earlier in the season it was time to tag along with another friend to watch his team and it was the turn of Premiership team Spurs for their game in the North-west against Wigan. It was part of a big day for the Premiership as Sky were hyping it up as the “RACE FOR FORTH”, with all 4 contenders for the position (Man City, Liverpool, Aston Villa and Spurs) in action on the Sunday so a big day was ahead for them. Spurs had earlier in the season beaten Wigan in a tight game 9-1 and so the focus was not only on Spurs chance to take 4th place back today, but on Wigan’s chance to avenge the drubbing they received in North London in November. It was also going to be my first Premiership game in 4 years with a trip to Villa Park the last time I saw the “top flight” live. I was expecting to be fleeced for the experience, but its nice to mix the games up that I go to see! 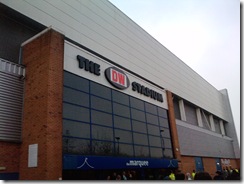 As Wigan isn’t that far from Lancaster we set off fairly late in the afternoon (for a 4:15 KO!? What is that about?) and stumbled across a radio station that just has to be mentioned! Normally I don’t mix my football and music together, go to The 66 POW if you want obscure tunes from the 60’s. ( ;) ) However a big shout out to Smooth FM, who I found after being fed up of some show tunes on Radio 2 and Radio 1, which is just an abortion of a radio station now.

So cruising into Wigan with a bit of Smooth was an experience especially with two males in the car! Wigan is a town in Greater Manchester that was officially part of Lancashire until 1974. Famous for its coal mining, Wigan was a major town in the industrial revolution with its coal mining and also its mills. Since then Wigan has been mentioned by George Orwell in his book The Road to Wigan Pier which highlighted that the town was a craphole basically. Today, there is a strong rugby league presence in the town with Wigan Warriors also sharing the DW Stadium with the football team. The DW Stadium was formally known as the JJB until this summer when egotist Dave Whelan who had sold JJB, renamed the ground after himself basically. (He claims that its named after his sports chain, but as his money built the ground, its safe to say its named after him!) Pulling up at around 3pm, we parked easily in the away supporters car park for the reasonable price of £4 and met up with Newman Snr to take the really short walk to the ground. If you’re interested in imaging how we looked cruising into Wigan on Smooth Radio, then listen to the song below that was playing when we arrived. (If you are reading this on facebook, then click “view original post” and actually see what my blog looks like and you’ll be able to read along to the sound of Irene Cara)

The DW Stadium is only 11 years old after opening in 1999 so still looks reasonably shiny and new. The away fans were housed in the North Stand behind the goal and with Spurs having a decent away following (they brought about 3500 – I can’t find an official figure), this Stand was basically full. However Wigan do not currently have the best following in the World and so the other 3 stands (South, Boston and Springfield) were fairly empty with the other 13,000 or so fans spread across them. It still looked a fairly impressive ground and would probably be rocking if they got nearer the 25,138 capacity for games. I had also been warned about the away concourse, however even with rowdy Spurs fans in good voice and the Stand fairly full, it was still easy to buy my Pie (which was sadly, for Wigan, disappointing), listen to a cockney complain that his hot dog was too dry and make my way up to the seats which had a fairly good view. 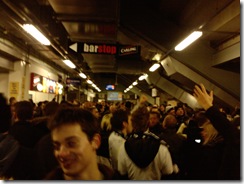 Wigan Athletic had been a Division 3 team that nobody particularly cared about until Dave Whelan bought the club in 1995 and promised Premiership football in 10 years. To be fair to them, they delivered achieving promotion to the top flight in 2005 and I still remember clearly watching Sky Sports 1 on their debut game when they outplayed Chelsea, who were champions at the time, only to lose to a last minute Hernan Crespo goal. Since then, they’ve found the Premiership a struggle and were involved in another relegation battle it seemed this season with new boss Roberto Martinez being stubborn enough to try and play attractive football with flair players on an awful pitch that would now only get worse with the rugby league season starting. Still, they went into the game in 14th position, 2 points off the relegation zone. Spurs on the otherhand were enjoying their now usual place near the top section of the league and with Liverpool having an awful season, they found themselves right in the mix for 4th place and could finish the day off in 4th place if they won here and Man City vs Liverpool ended in a draw. Spurs though have a history of bottling it when it really matters like in 2005 when they were a lasagne away from snatching 4th place from Arsenal. It remained to be seen whether they could finish this season in the Top 4, especially with pressure coming from 3 other clubs. 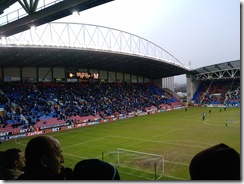 The game kicked off with Spurs fans making the most noise as it was clear quite quickly that Wigan fans were not the loudest. Even the annoying drummer who started around 10 minutes in couldn’t save what was a fairly low key atmosphere. The game wasn’t the best either as with both sides wanting to pass the ball about on the deck, an awful pitch and poor weather meant a lot more long balls were being played than either side would have wanted. However with both sides slightly out of form, this was never likely to be a classic. We did get a goal however in the 1st half when David Bentley was fouled in the centre of the pitch, referee Alan Wiley allowed an advantage which saw Niko Kranjcar and Peter Crouch combine well before Crouch fed Gareth Bale on the left who had bombed forward from the left back position. His cross found Jermaine Defoe who was apparently 2 yards offside (I was stood on the other side so I had no chance to see) and he tapped home to make it 1-0. Wigan did keep plugging away however and their best chance came late on in the half when Hugo Rodallega made Gomes in the Spurs goal produce an acrobatic save to deny his half volley. It came to half-time with Spurs deserving their 1 goal lead, but as a neutral I could only hope that the game got better. 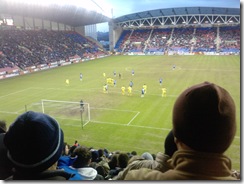 The second half also started fairly slowly but it was Defoe again who was making Wigan goalie Chris Kirkland work as he brought two good saves from the England goalkeeper. Wigan though did have their best chance of the game when sub Victor Moses brought an easy save from Gomes, who still managed to spill the ball before grabbing it back up, however that was really as good as it got for Wigan. Even the later arrival of Scott Sinclair (who could surely rival Theo Walcott for fastest player) could not galvanise a team who are clearly dreadful. Spurs were then looking the most likely to score and Crouch should have made the game safe when he was put through one on one but shot straight at Kirkland and the shot deflected off his face to safety. Sub Luka Modric then cracked a great effort of the post after some brilliant build up play from Spurs right hand side as it looked like there would only be one goal in this game. Yet another sub, Roman Pavlyuchenko finished the game off on 84 minutes when a superb through ball from Modric found was smashed home from Pav as he got ahead of Figueroa to make it 2-0. A 3rd was added in stoppage time as Pav had a header well saved from Kirkland, but as the Wigan defence just stood looking at the ball when it looked to be going out, he took the opportunity to tap in for his 2nd. It finished 3-0 and with Man City – Liverpool drawing 0-0, it meant Spurs were up to 4th! For now. So another big ground near Lancaster that I’ve finally got to visit, that was made a more enjoyable experience by being with the Spurs fans as Wigan would not of enjoyed watching that. I was surprised after the game to hear Wigan boss Martinez blame the referee for the defeat as Wigan were absolutely dire. So much so, that I’d be confident of Hearts even beating them. It was also good to shout abuse at two ex SPL players that I despise. Gary Caldwell and James McCarthy have both ended up here and was good to see both on the losing team, and Caldwell in particular looking out of his depth, already. Premiership games are normally quite pricey and with tickets normally costing £20, I have a massive thanks to Mark Newman for refusing to accept my money, so I will make it up to him by one day taking him and Newman Jnr to Tynecastle to watch some proper football. A few final things on note, firstly what the hell is a 4:15pm kick off about!? Sky Sports have done a lot of good things for football, but silly kick off times on a Sunday afternoon is not one of them. Also, I was looking forward to tucking into a Wigan pie, but sadly the pie fell apart and so disappointment ensued. Finally, Wigan fans are awful.

Photos from Wigan Athletic vs Spurs 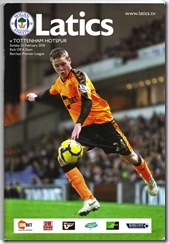 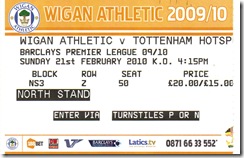