This had been the one Easter game I was really looking forward to, a fairly short trip to Bickleigh, just South of Tiverton to see the new team at Level 11 in their first season in the Southwest Peninsula League, but alas, Mother Nature was not playing ball and their game against Appledore was called off, my other plan to see Okehampton was also shattered by the rain and so that left me with some trawling to do on local league websites on Good Friday morning. I was even looking at games towards Bristol for my day out, although that seemed quite extreme. In the end it was the choice between Tavistock or Liskeard and I chose the shorter drive to see Tavistock in their “derby” game against Launceston. Worrying slightly by the strange weather conditions of peeing down one minute then sunny the next, I presumed the game would be on and took the easy route South to Tavistock. 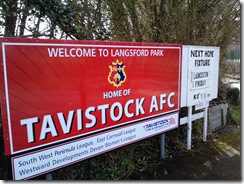 Tavistock is a market town in West Devon which runs on the River Tavy (guess where the name comes from!) who’s population is over 11,000 making it massive in Devon proportions. The reason for the large population in Tavistock is a popular commuter town to Plymouth (despite having no rail links) and an ever growing popularity with retired people – making the town’s average age a massive 44. The town’s most famous son is Sir Francis Drake who was born in the town in 1540. Today, the small market town is home to the eastern Gateway of the Cornish Mining World Heritage Site and the “Best Farmers Market in the South West”. Having left Torrington in N.Devon in the peeing rain, I was surprised and slightly delighted (I’ve spent too long down here) to find that the sun was shining down on Tavistock when I arrived at around 2pm. Having Googled Street-Viewed the ground (expect me to say that for EVERY match report from now on!) I cruised in with ease as getting lost is a thing of the past. Langsford Park seems to have undergone a recent referb as the new changing room blocks look extremely modern and an expanded car park was also modern looking where I parked Victor. 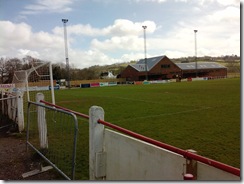 I got there early so wopped some pictures onto my phone and had a read of the programme (more on that joke later) before having to leave the ground to get something to eat from the clubhouse the other side of the road where I got a tasty ham and mushroom slice and a can of Pepsi (other soft drinks are available, like Irn Bru – which I can now drink again) before bimbling over back into the ground just before kick-off. Langsford Park is a fairly bog standard ground, with the new changing room blocks and two seated stands that are attached to it. On the other side of the pitch is another covered area that actually kept out the biting wind due to have a closed section down the side too. I chose to stand here because of that as the wind was really quite strong today. The rest of the ground is hard standing and railed off – like all other grounds I’ve been to in this league. There also seemed to be a decent crowd for this one as it would be the 2nd time in a week I would be watching Launceston after seeing their 4-2 win over Dartmouth the previous Saturday. I was also interested in seeing Tavistock again this season after seeing them lose unluckily (they only had themselves to blame actually) in the FA Cup against Barnstaple Town in August. Since then they have done fairly well in the SWP Premier and went into this game in 4th position, but 11 points behind leaders Buckland Athletic. They still believed they could challenge for the title and a win here would help that cause. Launceston’s game in midweek had been postponed and so this was their next game played after their win over Dartmouth the previous Saturday. 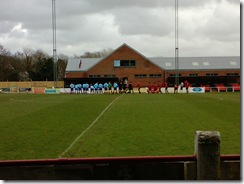 The game kicked off with some sun, but it had now become quite overcast and I feared it would absolutely pee it down later on but this seemed not to deter some Launceston fans next to me who were cracking out the beers as kick off came. When I last saw Launceston they hadn’t bothered to play most of the 1st half and as a result found themselves losing at half-time and maybe Tavistock had scouted this fact as they allowed Launceston to come at them early on not expecting much, however Launceston surprised everyone and took the lead after only 7 minutes when some great work down the right hand side saw the ball whipped in and Liam Tilley got his head to it and although the Tavvy keeper seemed to palm the ball about, the ball eventually went in – via a deflection I presume to give the Cornish side an early lead. Tavvy should have equalized straight away when a ball from the right found the whole Launceston defence asleep and big striker Adam Carter smashed his shot high and over the bar from about 5 yards out. Carter was clearly causing trouble for the Launceston defence as he had more chances in the half before he did equalize on 36 minutes when he was put through on the edge of the area and he cracked a shot, low into the bottom corner for a deserved equalizer for Tavvy. Launceston did have 1 chance right on half-time which was well saved by the Tavvy goalie. An interesting 2nd half ahead as it finished 1-1 at HT. 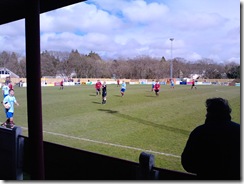 For the 2nd half, Tavvy had the wind behind them as they began putting Launceston under pressure straight away as Launey had to dig in deep to stay level. They could though have taken a surprise lead on 49 minutes when they had a 1 on 1 situation but hesitation let them down and the Tavvy defence got the ball cleared. After that early scare it was all Tavvy as they began to use the wind to their strength and create chance after chance. Tavvy first had a shot cleared off the line from a corner, and when it looked like Launey may just actually weather the storm and hang on for the point, the game changing moment happened when a harmless ball was crossed in from the left, took a knock off a Launceston player and the referee gave the penalty for handball. The Launey fans around me were incensed as it did look a harsh decision, however Will Stringer stepped up and confidently smashed home the penalty to give Tavvy the lead. Then, 10 minutes later, almost exact carbon copies of the same goal were scored within a minute of each other to put the game beyond doubt. Firstly Shane Krac ran forward and let fly from the edge of the area and the Launey goalie let it go through him to make it 3-1. Then, barely 60 seconds later Lance Bailey found himself on the edge of the area and was told to shoot. Quite optimistically we all thought, but his shot again beat the Launey goalie (who was at fault for both) to make it 4-1 and game over. Or that’s what we thought as Launceston on 79 minutes reminded us that they were there when a great through ball put Sam Davey through against the keeper and while his shot was partially saved, it had gone under the keeper which allowed Davey to put the ball in from a yard out. The scoring wasn’t finished there however as Tavvy got a 5th on  86 minutes when a shot or cross (who knows) was sliced into the area and became an inch perfect cross for Will Stringer to easily head home for the 5th and final goal. The end to a goal-fest. 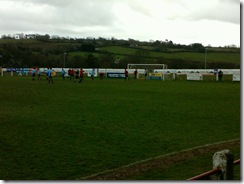 Despite having 7 goals in this game, this was never really a thriller as the game was a ‘derby’, although the most tame derby I have witnessed. Fair play to Tavistock though for getting the game to go ahead and then for playing some decent football throughout to keep up their pressure on the top sides in the table. Launceston will be disappointed to lose this 5-2, but their 2nd half performance just had no answer to the Tavvy onslaught. It was also my last SWP game for a while. A league I discovered early in the season has seen me take in 4 games in this season and I will be looking to add to that hopefully in 2010/11. (Although who knows where I’ll be for that!) My last Easter game was a re-visit, although a great re-visit at that, to Southern Premier team Tiverton Town. As for Tavistock, a decent ground, although they do get some wind blowing through it!

Photos from Tavistock vs Launceston

- Programme: 3/10 (the same programme is produced for every game it seems, but the addition of a 4 page insert, so you are paying £1 for an insert)

- Referee: Lee Dudman – 4/10 (never heard a ref described as Hitler before, but he deserved it) 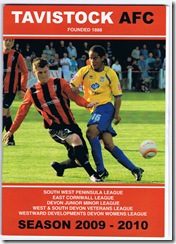