Cost: Free (but they did accept donations)

Valentine’s Day. The day of love, or as more people think, a day of wishy washy crap where people need to get away from awful couples and overpriced meals. I had planned to go to a game to avoid seeing some piss poor film on my own such as P.S I Love You, but the decision to what game was made for me by the sensational poster that Sutton United had made for this rearranged game vs Boreham Wood. Sutton had even offered free entry for this game so it was down to South London to avoid the flowers, chocolate and ridiculous public displays of affection to watch some proper football. 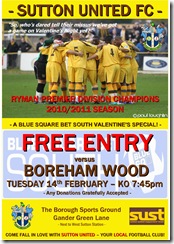 (sensational, this is how to publicise a game!)

Sutton is a large suburban town in southwest London. The town was connected to central London by rail in 1847. As part of the suburban growth of London in the 20th Century, Sutton significantly expanded and increased in population before becoming part of Greater London since 1965. Sutton is one of several towns located on a narrow bed of Thanet sands which extends from Croydon to Epsom. Today the town benefits from very low crime by London standards and the presence of several large businesses on the Victorian-era High Street. Other claims to fame include an episode of Mr Bean being filmed in a department store in the town and (back to the Valentine’s Day crap) a match.com advert was filmed at Sutton’s train station. 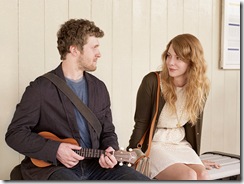 (Want to come back to mine? No darling, Sutton United are playing tonight)

Sutton United have had a long history stretching over 100 years but are only really remembered for one FA Cup game back in 1989. The club started out playing in local leagues but progressed into the Athenian League in 1921 and while were slow starters, they won their first Athenian League championship in 1928. They carried on this success in the 30s reaching the FA Amateur Cup Semi-Finals in 1929 and 1937. After the war, things started going well for Sutton off the pitch at their Gander Green Lane ground saw the main stand constructed which still stands there today, dominating the ground. Sutton also in 1963 reached the FA Amateur Cup final losing 4-2 to Wimbledon but did reach the Isthmian League in 1967. After an FA Cup tie vs Leeds, Sutton U amazingly won the Anglo Italian Cup in 1979 with a 2-1 win over Chieti before they achieved promotion to the Conference in 1986. Then in 1989 came they most famous moment. In the FA Cup 3rd Round, they welcomed First Division Coventry City and goals from Tony Rains and Matthew Hanlan gave them a shock 2-1 win to become the last team to knock a top league side out of the FA Cup as a non-league side. Recently, Sutton have had time back in the Isthmian League before stepping into the Conference South in 2004/05 after the FA restructured the leagues. After dropping back again, they were promoted last season from the Isthmian League Premier after winning the league quite comfortably.

This season Sutton United have clearly continued their momentum they picked up from promotion and were going into this game in 5th place, the last play-off position. They had also reached the FA Cup 2nd Round and were live on ESPN as Notts County went away with a fortunate 2-0 win. While Woking look promoted as Champions already, the 4 play-off places are still up for grabs with Sutton under pressure from Weston-super-Mare, Dorchester Town and Dover Athletic so 3 points from this game would put them well on track for the play-off fun in May. Their opponents were lower down the league in 14th and came from North London in the form of Boreham Wood. “The Wood” are 9 points clear of relegation so should be ok this time out from having to play in the Isthmian League themselves next season. The Sutton v Wood derby should have been a double over Christmas, with a 1-1 draw being played out at Wood’s Meadow Park ground on Boxing Day before the New Years Day game being abandoned due to the rain with the score at 1-1. Another blogger, in the form of Mr Peru was at the original game and you can read his thoughts on it here. 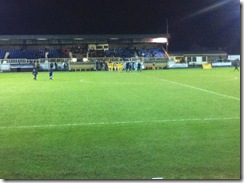 The game kicked off with not a sign of rain in the sky and Boreham Wood actually started out the better side as they easily repelled Sutton’s early probing before going back on the attack themselves. BW had the first good chance of the game as a cross came in from a free kick and Charlie O’Loughlin’s header towards goal had to be cleared off the line by Michael Boateng. While Sutton took a while to get going, eventually they did and should have scored after some persistent work by Joel Ledgister, Leroy Griffiths put in a good cross to the far post where Harry Beautyman had an easy header to knock across goal for 1-0. Yet, amazingly he put it wide. BW made the home side pay for that as well on 29 minutes as we went from keystone cops to world class in 20 seconds. A long aimless punt should have been cleared by Simon Downer who not only managed to miss the ball but then give it away to David Bryant. He passed the ball to Billy Lobjoit who in turn found Mario Noto. With his back to goal and nothing really on now as Sutton had got back in numbers, he swiveled and looped a quite ridiculous shot over home keeper Kevin Scriven and into the corner of the net. A new contender for my goal of the season. Sutton equalized quickly though as some passing on the edge of the area found Craig Dundas who fired a shot from 25 yards out. This should have been an easy save for Michael Jordan, even with the slight deflection the shot took, but he completely misjudged it and Sutton had a soft equalizer. The Wood manager even commented after the game, “(He) should not have conceded their opportunist first half goal which he got totally wrong.” Not much else happened in for the rest of the half, so I made my way over to the Main Stand to see the 2nd half from the classic structure. 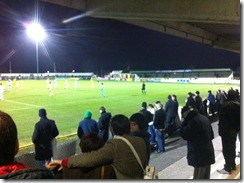 Boreham Wood played better in this half than their lower midtable position in the league suggests and had several good chances to retake the lead. David Hutton forced a good save from Scriven and then Hutton made an excellent run into the area but the final ball wasn’t there and it was cleared. Sutton were not doing much going forward, although they nearly took the lead through a complete fluke on 70 minutes when Beautyman sliced a cross onto the roof of the net from way out. That seemed to be the signal for them to get going however as they pushed forward in search of the goal that would strengthen their play-off hopes. It nearly arrived on 77 minutes too when sub Kyle Vassell controlled Downer's header from a free kick on his chest before firing in a superb overhead kick that Jordan saved brilliantly to make up for his mistake in the 1st half. While BW had a penalty appeal late on waved away (right decision), as they had been doing most of the pressing in the 2nd half, we saw again what happens more often than not as Sutton snatched a winner. 86 minutes had been played when a corner from Beautyman was only cleared back to him on the edge of the area. He controlled it well before firing a shot through the crowd and in to delight the Sutton fans behind the goal and give the BW fans the feeling of being on a really bad 1st date. They nearly snatched an equalizer in injury time as they launched forward as a cross found Lobjoit for a free header, but it was poor as Scriven easily saved to make sure Wood left empty-handed. 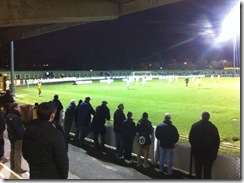 It’s always interesting going to games on Valentine’s evening to see which poor females (or males) have been dragged out and away from the house to see football. There were a few about and they should have enjoyed this game as it was played at a reasonable pace and level. Sutton United should be in the play-off mix at the end of the season and since this game they have continued their good spell as they currently sit in 5th place. Boreham Wood shouldn’t have any relegation fears either as I can see them playing out the rest of the season in midtable. Hopefully Sutton got a good amount of money for their youth development for this game (I believe that what the donations on the gate were going to) as they are a friendly club and have a strong foundation to play at a slightly higher level. I would love to see the terraces and stand move closer to the pitch, but the cost of that will be humongous so can see why it is. I avoided forced romantic crap and saw a decent game of football too. Successful evening. 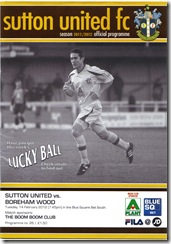 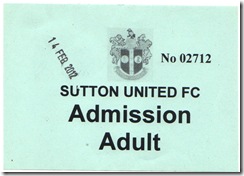