After another exam session that wiped football off the agenda for a few weeks (well it makes a change from the weather!) it was back to a Saturday free and one for football to get involved with. While games didn’t massively stand out, a ground that I had been keeping an eye out on for some time was hosting a proper Essex derby. Getting my fake tan and pejazzle sets on, it was off East, to glorious Hornchurch! 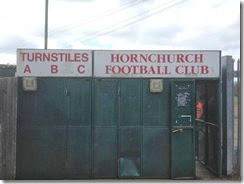 Hornchurch is a suburban town in East London and part of the London Borough of Havering. Hornchurch originates from around the 12th Century when Henry II gave 1,500 acres to the hospice of St Nicholas and St Bernard, Mountjoux, in Savoy as a gift. A church was established in Hornchurch, but the monks were forced out during the 14th Century when a new law banned foreign land ownership. The lands were then given to Lord Chancellor William of Wykeham who made major renovations to the church. He subsequently gave Hornchurch to endow New College, Oxford, which still owns all the local church lands and buildings. During both World Wars nearby Hornchurch Airfield was an important RAF station; it was known as RAF Suttons Farm during the Great War, with its HQ as far away as Upminster Hall. During the Second World War, the airfield was known as RAF Hornchurch, and was home mostly to a number of Spitfire squadrons. During the First World War a large vacant country estate called Grey Towers on Hornchurch Road was commandeered by the Army Council as a military depot. In January 1916 it became the first Command Depot for the New Zealand Contingent in England but was found to be more suitable as a Convalescent Hospital Camp for New Zealand Servicemen, and was run as such until June 1919. Like most suburbs of London, Hornchurch had been entirely rural until the arrival of the railway which spurred huge property development during the early 1900s. Whole estates were constructed such as Emerson Park to the north. Development was fuelled further by the arrival of the electrified District Line during the 1930s with housing developments south and west of Hornchurch in places such as Elm Park. 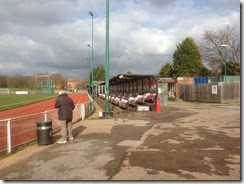 AFC Hornchurch are only 9 years old, having been formed in 2005 following the demise of the previous Hornchurch FC. The previous incarnation of the Urchins date back to 1923 when Upminster Wanderers were formed playing in a local park at Upminster. After the Second World War, the club joined the Spartan League and played in Division One East for several years before being promoted to the Premier Division. 1953 saw the club move to the Hornchurch Stadium for the first time and change its name to Hornchurch & Upminster before dropping Upminster off the name altogether in 1961. On the pitch, they were up and down with an occasional trophy but an excellent FA Vase run in 1974/75 helped it gain promotion to the Isthmian Leagues. Plodding along nicely there, a fire at the clubhouse in 1989 led to years of struggle in the lower leagues until 2000/01 saw a promotion back to the Isthmian League. At this point, the club were restructured with an investment company taking over and the Hornchurch Stadium radically redeveloped into a 1000 seater ground. However, in 2004/05 when backers Carthium Ltd were declared bankrupt, despite 3,500 in the ground the season before for a FA Cup tie against Tranmere Rovers, Hornchurch FC were no more and the AFC suffix was in use again. 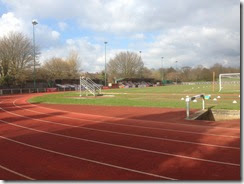 The new Urchins started in the Essex Senior League in 2005/06 and with a larger fanbase than most, cruised through this league back into the Isthmian. Momentum was on their side now and a second league win in 2 years was secured the following season with the Isthmian Division 1 North title picked up. Always there or thereabouts at the top end of the Isthmian Premier, Hornchurch finally made the step up to the Conference South in 2011/12 through the play-offs after just missing out to Billericay Town for the title. Conference South was a different monster though and all that hard work lasted just one season for the Urchins as they were promptly relegated in 20th place, just 1 point away from safety. 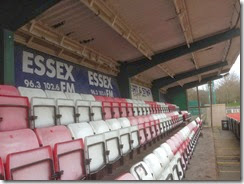 The Hornchurch Stadium has been the home of the Urchins since 1952, a short walk away from Upminster Bridge station. While the running track added in 1956 will instantly dishearten a lot of football purists, the view on the whole is actually quite good around the ground. Down the sides of the pitch are a substantial amount of covered terraces and seated stands with a small uncovered terrace in one of the corners. While unsurprisingly, the view behind both of the goals is poor due to the curve in the running track, the bar overlooking the ground also provides some excellent views across the pitch where a few stood to take in the game. Isthmian League grounds are radically different which I suppose adds further to the charm of this league. This is one of the better athletics grounds that I’ve been to and just adds further to the variety of the Isthmian. 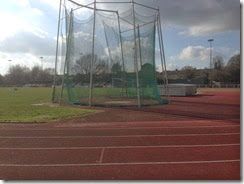 With Hornchurch looking for an immediate return to the Conference South, it was no surprise to see them up there in the top 6. Coming into this game in 4th, they were well in the play-off hunt, having a 3 point lead over 6th place Bognor Regis Town. While it looks like the top 3 of Dulwich Hamlet, Maidstone and Wealdstone will battle it out for the title, another 3 way fight was brewing for the final play-off positions too. With Kingstonian (in 5th) and Bognor Regis having winnable games, it was vital the Urchins kept up the play-off push. In town from even deeper Essex were Grays Athletic who are a world away from 2005/06 when they were top of the Conference looking at a Football League place. Now without a permanent residence and floating just outside the relegation zone (albeit with at least 5 games in hand over teams around them), times do look tough for The Blues, having won promotion the season beforehand. 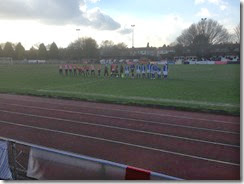 Despite a 5-1 win for Hornchurch at Grays back in October, the away team were backed by a pretty large and vocal following in the corner and saw their team make a decent start against a nervous looking Hornchurch. The home side had been fired a warning as early as the 3rd minute when Leroy Griffiths cut inside and fired a shot off the post. With Grays constantly pushing forward, they won a penalty in the 10th minute when a shot was fired at Elliot Styles and handball was given. It looked harsh, but Joel Nouble fired past Inigo Echepare for a 1-0 lead. Shellshocked into some action, Hornchurch pushed forward with a couple of half chances created before they were stunned again. Griffiths again tore down the left hand side to cut the ball back to Grays’ top scorer Joao Carlos for his 11th goal of the season. With the home fans irate at referee Graham Kane for a series of petty fouls, their mood wasn’t lifted in stoppage time when Michael Spencer fired a shot high and wide. 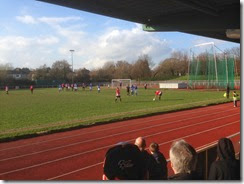 Hornchurch went at Grays for the vast majority of the 2nd half as the away side sat back on their two goal lead. The tactic looked comfortable as George Purcell fired a shot aimlessly high, however on 52 minutes Billy Coyne ran at the Grays defence and fired a low shot past Lloyd Anderson from well outside of the area. Suddenly, they didn’t look as comfortable as Grays resorted back to the performance their league position suggested they would. Spencer had a shot deflected over the bar before Purcell had a shot cleared off the line as it looked only a matter of time before Hornchurch grabbed an unlikely looking equaliser. Grays weren’t playing well and Craig Pope tried to play a pass only he knew what for which set up Purcell, but his shot was saved again. Towards the end of the game, with Grays clinging on now, Hornchurch resorted to pumping long balls forward which might have worked in injury time when Ryan Kirby brought down Stefan Payne through on goal. It looked like a red card, but only a yellow was shown. To add even more anger to Hornchurch, the free kick bounced around the box for Payne to hammer the ball home for a dramatic equaliser! Only to be ruled out for offside. It wasn’t meant to be their day. 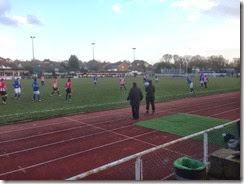 Grays showed their various types of performance for this one as an extremely comfy 2-0 lead at HT should really have been wiped out by a wasteful Hornchurch side. Since this game, Hornchurch have picked up a decent 10 points from 15, including an impressive 1-0 win over Maidstone Utd. It leaves them down in 5th, just 2 points off 6th and with Lowestoft Town now joining the play-off fun, it will be a squeaky April for Hornchurch, but with a winnable looking run-in, they should make it. Grays unsurprisingly have ripped into their games in hand and now sit 16 points clear of the drop zone and with another 3 games left to go, there is the smallest of chances they could produce a brilliant late play-off surge. This was my first game in quite some time and was a decent one in a league I really should be visiting more often. Athletics grounds aren’t everyone’s cup of tea, but this one is decent enough and is worth a visit.

- Programme: 7/10 (was a decent effort, have seen clubs charge £3 for this amount of content) 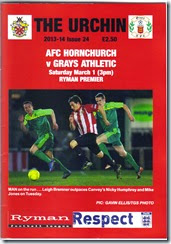