Come April or May into the previous season and your team has done it. Got promotion into a new league or next division and you just can’t wait over summer to see their first game in that new league. Last summer when the SWPL was taking new teams up to it’s 1st Division, I really wanted to go to whatever newbies were accepted into the East side before I headed away from the SW. That team were Sidmouth Town who had won the Devon and Exeter Premier last season and with their Manstone Lane ground being good enough for a higher level, Sidmouth came up and off I went on the opening day of the season. 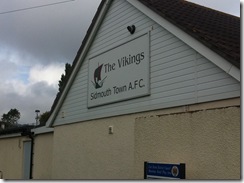 Sidmouth is is a small town on the English Channel coast in Devon, South West England. The town lies at the mouth of the River Sid in the East Devon district, 15 miles south east of Exeter. Sidmouth appeared in the Domesday Book as Sedemuda. Like many towns on the south coast, it was a small fishing village. Though attempts have been made to construct a harbour here, none have succeeded, and a lack of shelter in the bay prevented the town growing as a port. It remained a small village until the fashion for coastal resorts grew in the Georgian and Victorian periods of the 18th and 19th centuries and still today on the town signs, states, “the regency town by the coast”. I was looking forward to visiting the town as I was wanting some chips on the seafront, however I’ll be honest now and say the place is a bit of a dump and vastly overrated. I could not find a proper chippy apart from a posh one which wanted £3.60 for large chips. Even Edinburgh and London don’t charge that. The beach is also pebbles and there is just the feeling of death around the place so I scurried up the hill with a cheap pasty to get to the ground. 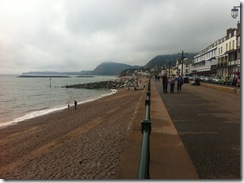 Sidmouth Town FC had been around the local leagues for the majority of their history before they won the Devon & Exeter League Premier last season by pipping local rivals Seaton Town to the title and as they had applied for promotion (the only club in the D&E League out of 4 who applied to actually be accepted) they were welcomed into the SWP League for the first time for 2011/12. Their ground at Manstone Lane is at the northern end of the town and is a public park, although Sidmouth have been allowed to build some features on the pitch to allow themselves to make the step up. On the far side, some hard standing has been put down with a rail down this end and the dugouts. In the future, plans are in place (and accepted by the local council) to have a stand at the ground too, which will most likely be a identikit stand but will provide some seating and cover. The clubhouse is set back slightly from the pitch and is a really nice one, with finally a large amount of ciders on offer! Most clubs in the SW only provide one! It’s a nice venue and one that will make the many visitors to it this season feel more than welcome. 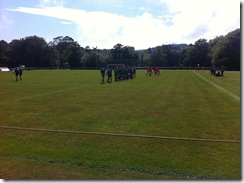 The first SWPL visitors to Manstone Lane were Exeter Civil Service who are a completely different side from when I saw them last season in a Devon FA Premier Cup tie. After parting with their manager at the end of last season, new boss Russell Newcombe came in and then left just before this game despite only being in the position for less than 2 months. The reason was a lot of players who said they would play for him then went elsewhere (pretty much the same reason why Bickleigh had to withdraw from this league altogether this season) and left Civil Service, who also field a 2nd team in the D&E League, with barely any team at all. Enter new boss Mark Taylor who worked effortlessly over the final part of the close season to cobble together a side which mixes youth and experience to play this season and make Civil Service a complete darkhorse this season. They could be quite awful as a team a la the Star Wars Cantina bar scene or quite brilliant. Remains to be seen… 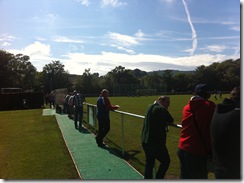 Game played in glorious sunshine was scrappy to begin with as both teams struggled with the match pace of the opening game. The first real chance actually took 15 minutes to arrive as Sidmouth finished off a good passing move with Barker shooting wide from outside the area. Civil Service though did have two major appeals for handball in the area which were both turned down by referee Cameron Mann. Both teams were slowly creating the other odd chance although I noted midway through the half that I was impressed with the Sidmouth bench did not argue with the ref when a decision went against them which was refreshing to see. By now the home side had the slight advantage and opened the scoring on 30 minutes when a great throughball sent Andrew Thompson away and after he beat his man, smashed home a shot to make it 1-0. In fact, Sidmouth nearly made it 2 just moments later when a player known as “Fez” missed a sitter from a corner. Civil came right back though and had a shot cleared off the line before their strange equalizer. They had a corner, but before the ball could be played in a stray elbow went wandering and Civil demanded a red card and penalty, Mann gave nothing except the call to give the corner yet when Ollie Burns wopped the corner in, Sid goalie Ashford fumbled the ball in for 1-1. I’ve put it down as an own goal. HT, that Cantina bar side are still in it, interesting. 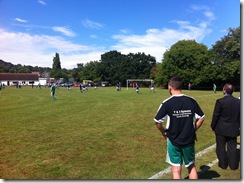 Civil needed to be strong at the start of the 2nd half to avoid being punished, yet only 1 minute into the half a cross found Coombs completely alone in the box and his power header went straight into the bottom corner and the home side lead again. By this time, everybody on the pitch had noticed Sidmouth’s #9 and captain Ashley Barker. I have never heard a player swear so much at the referee and get away with it which says more about Mr Mann I suppose. Should Barker come up against a more tougher referee, he will getting a red card. Mr Mann was also starting to annoy both sides with some bizarre and hesitant decisions and even held the game up for around 30 seconds with both sides asking what he had given from a throw in, goal kick or free kick? (It was a throw in). The rest of the half had no real clear cut chances as the scrappyness came back into it and Civil couldn’t create a decent effort until the last minute when a shot from outside the area trickled wide and with that their chances of snatching a point trickled away too. 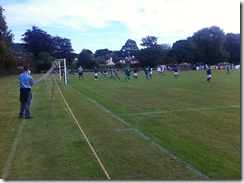 A good start for Sidmouth Town then as they picked up 3 points on their debut in the SWPL. Before their next game (away at Axminster) there was a shock as joint managers Paul Ashford and Phil Margrett both left leaving Simon Hudson in a caretaker role although 3 straight wins on the bounce (Axminster, 4-1, Appledore, 2-1 and Ottery St Mary, 1-0) has put them at the top of the table as I write this. A sensational start from the newboys. Civil Service have only played two other games since this one, a 5-1 hammering at Stoke Gabriel and a 2-0 home defeat to Exmouth Town so that Cantina scene is looking good. I’d really recommend a visit to Sidmouth, a friendly club off the field who actually play some good football and look to be on their way up. Good luck to them!

- Ground: 6/10 (will improve over time with additions) 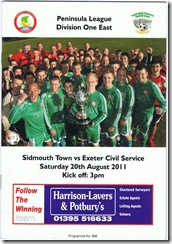