I knew my blog would look a little lonely over the summer as I took a break from football, however I did come up with a little feature that I may use over each summer break (I intend to keep this blog up you know!). Titled, “New Fan Project”, its basically me e-mailing clubs from a certain country telling them how I am a supporter of said league and club and hope they send me some free stuff. Now I know straight away what you are thinking, “what a cheeky sod”, however if clubs do send me stuff that I don’t really want or have space for then I intend to somehow sell it for charity (on eBay or another medium).

This summer, I decided to ask Germany and the Bundesliga, 2.Bundesliga and also try the 3.Bundesliga clubs to see what they sent. With the help of my German speaking friend Julian, I am currently in the process of e-mailing all the clubs I intend to. However, I decided not to ask for anything from the Bundesliga clubs (except Bayern, as they appear to have no general e-mail address) which may have backfired as I have so far had 7 lovely e-mails thanking me for my support but nothing else. At least they replied I suppose, so well done to the following clubs so far:

Schalke 04 – actually wrote to me in English

Borussia Dortmund – the first to reply

I’ll be sending the rest of the e-mails out (with an updated sentence asking for stuff!) in the hope that clubs might do. I’ll keep the blog updated on any response I get.

Speaking of charity, I urge you to go read “Journey to the 92” which can be found in the blog list links on the left, or visit http://tothe92.blogspot.com/ . It details how a Gillingham fan is travelling around each of the 92 clubs and donating it all to a worthy cause, a great read. When I finally get some coffers in the bank I will donate to his cause, the Great Ormond Street hospital and hope you all do too.

I’ll write a preview of the upcoming 09/10 season detailing the changes that will happen and hopefully where I will be going to. Also, I’ll reveal where I am going on July 5th to this mysterious non-footballing event, it is that exciting!!

Here is the list and reasons of the various grounds I hope to visit next season and the reasons why. How many will I get to? Who knows, but these are at the top of the list.

Exeter City (St James Park) – While I have visited the real St James Park twice before and saw 8 goals in the process, a blog report will be done here next season. Hopefully I can get to see Carlisle United when they come down to Devon. 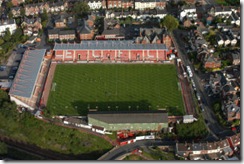 Torquay United or Plymouth Argyle (Plainmoor or Home Park) – Another ground down in Devon and a choice needs to be made. Its extremely likely I won’t have the time and/or money to get to both Torquay and Plymouth, so which one? Torquay will have the cheaper price, but Plymouth (in theory) will play the better football, but at a more expensive price. The fixture list will help me with this one. Plymouth vs Newcastle maybe?

Barnstaple Town (Mill Road) – Could be my first competitive fixture of the season and one I hope to see early on. Easy to get to and affordable too.

Elmore (Horsdon Park) – Tiverton’s other team, who play in the Western League Division One should be another one that I’ll get to. Most likely over Easter.

Morecambe (Christie Park) – I’ve been many times to Christie Park also, however a blog report should be nice there and its also the Shrimps’ last season there so I hope to get to the last ever match at CP in late April/May.

Preston (Deepdale) – This is a must. It should be my last year at Lancaster and the biggest team in the area is a must see. Regardless of the more expensive price I will have to pay, hopefully will get to see a decent team or even better, the derby vs Blackpool. 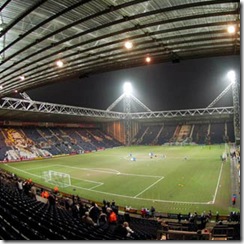 Bamber Bridge (QED Stadium) – Another must, with Bamber Bridge just South of Preston, would be better to visit with Lancaster City but beggars can’t be choosers.

Chorley (Victory Park) – Another ground on the line between Lancaster and Manchester, so Chorley could be another ground to visit with Lancaster City.

Bolton Wanderers or Wigan Athletic (Reebok Stadium or JJB Stadium) – Yet another choice, due to Premiership prices and I’m swaying towards Wigan as I don’t really fancy paying £30+ to sit in a soul-less, plastic ground watching crap football. If Spurs play Wigan when I have a day free, I’ll be at that thanks to my Spurs supporting friend.

Rochdale (Spotland) – A groundhopper’s favourite, hoping to see Rochdale as another friend who I live with has offered many times before to go. Should be a good day out whenever I get to go. 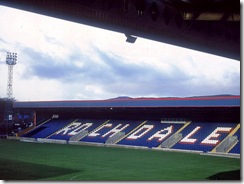 Penrith (World Group Stadium) – A trip to rural Cumbria could be on the cards to visit Penrith’s new ground in the Northern League.

Gillford Park (Milltec Stadium) – Another trip to Carlisle to visit one of Carlisle’s non-league teams. Gillford Park also issue programmes as far as I’m aware so this could be an easy ground to see given my ties with Carlisle.

Barrow AFC (Holker Street) – There will only be one game that I will go and see at Holker Street and that is Barrow vs AFC Wimbledon due to me living with a Wimbledon fan next season. Most likely they’ll arrange this fixture for Boxing Day knowing the Blue Square.

Gretna 2008 (Raydale Park) – With the reincarnation of Gretna 2008 and with them now playing at their old ground at Raydale, Gretna 2008 is now a must see for next season.

Annan Athletic (Galabank) – Another must see as the Division 3 newboys performed exceptionally well this past season. I’ve heard good things about Annan and Galabank and the distance isn’t too far away either. 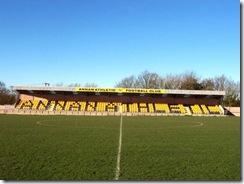 Queen of the South (Palmerston Park) – Another possible trip to the Scottish boarders to see a possible promotion push from the Dumfries side this season. Fixture list will largely determine if I visit Palmerston this season.

Kilmarnock (Rugby Park) – I first selected this ground as geographically Kilmarnock is parallel to Hamilton (where I went this season), however on further inspection it takes an extra 30 mins to get there, (so 3 hours in total) and it appears no parking is anywhere near the ground. So sadly, this looks unlikely.

So thats it, my “wish list” for 09/10, it will be interesting to see how many of these I get to. I have a project or ‘plan’ for entertaining this blog and its readers over the summer – more on that next week. While my first blog report will be a special event on the 5th July (more on that later – its not football though! :o)