I didn’t fancy my chances of getting to see a game in Scotland this season but when I was called up to Edinburgh I made sure I stayed over to get a game in on the Saturday! One ground I have been wanting to get to for some time is Meadowbank Stadium, now “home” to Edinburgh City and so when they had a game scheduled for the weekend I was up against Preston Athletic, I jumped at the chance to go… 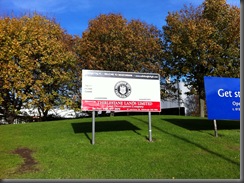 …that was until SFA Cup Round 2 day when Edinburgh City were crashing out to Threave Rovers, Preston Athletic managed a credible 0-0 draw at home to Annan and so were involved in a Replay on this day. That wiped my 1st choice game out and so I was looking at Junior Cup ties in nearby Newtongrange and Linlithgow before Ed City rearranged (to my delight) a league game with Edinburgh based Uni, Heriot-Watt. Edinburgh City play at Meadowbank Stadium which is an anomaly in football grounds. Based in the North of the city, around 5 mins away from Easter Road (home of Edinburgh’s 3rd team) Meadowbank Stadium was actually host to an SFL team, in Meadowbank Thistle before they relocated to Livingston in 1995. Edinburgh City moved in here in 1996, twenty years after they reformed and have even managed to pick up a couple of old Meadowbank Thistle fans who do not want to make the trip to Livingston every week. 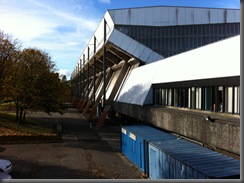 The main reason I wanted to get to a game here was because of the current awful state of the ground, plans to refurbish or even demolish the ground are in place which would be a real shame. I’m all for a gentle refurb however as the ground is showing real signs of age since it was built in 1970 for the Commonwealth Games of that year. Its capacity is 16,500, making it one of the larger grounds in Scotland (actually the 8th biggest) and is dominated by its 7,500 capacity main stand which everyone had to be in to watch this game. The view from here isn’t great, due to the two sand-pits and running track around the stadium, but I could see ok. Around the other curved areas are uncovered seating areas which you are not allowed in and they have signs nearby stating its condemned. If you imagine the Gateshead International Stadium, Meadowbank is very similar just without the care and funding that its Geordie counterpart has been given. Its a real shame, yet the council seem hellbent on selling the land, which is a concern given that (to my knowledge) they have not offered any suitable relocation for these services (Meadowbank is also home to a leisure centre, velodrome and basketball area), the great location of Meadowbank seems to have been forgotten by the City of Edinburgh council. Council of the capital city of the most obese nation in Europe. 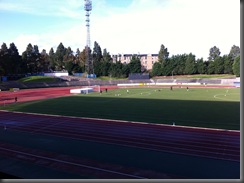 Edinburgh City have floated around various grounds in Edinburgh before settling on here in 1996. They currently play in the East of Scotland Premier, although they have recently applied twice for Scottish League membership, in 2002 and 2008 and were rejected both times, losing out to Gretna and Annan respectively. That being said, the “pyramid system” in Scotland is finally being looked into and I think Edinburgh City would be a shoe-in into a new Division 3 should the SFL adopt this. While they still play in the East of Scotland Premier, they are a floating side who can rise and fall up the table, although they won the Premier Division title in 2005/06 but haven’t come close to repeating that since. Their visitors today were from Edinburgh’s “2nd” University in Heriot-Watt. Only becoming a University in 1966, the former School of Arts of Edinburgh is now mainly based on its Riccarton campus on the edge of the city. I am looking forward to getting to their ground as Riccarton is also home to the Hearts FC training area and so it has some top notch facilities. Both of these teams were languishing towards the bottom end of the league with Ed City in 10th (out of 12) having not won a game this season yet, but went into this match with 6 draws and 2 defeats. Heriot-Watt were rock bottom with only 4 points from their 1st 9 games as they were looking to avoid the drop to EoS Division 1 and titanic clashes with the mighty Hawick Royal Albert and Craigroyston. 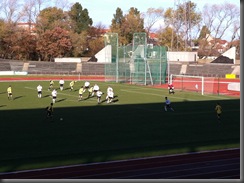 The game itself was really one to forget as I even took a notebook to make lots of notes but in the end squeezing the game into 2 paragraphs which I normally do would just be pushing it. Ed City had the early running but Heriot-Watt came back strongly at the end of the 1st half and even had the ball in the net on 30 minutes but was ruled out for offside. Chris Donnelly then missed the 1st of his 2 good chances for the students moments later when he rounded the keeper, but could not finish from a tight angle. The 2nd half saw Donnelly miss an even bigger chance when Heriot-Watt countered through Lars Berger and his cross found Donnelly in the area unmarked but he skied his shot over the bar from about 5 yards out. Late on Edinburgh City did push forward for a winner and their goalie did save well from a good City move but 0-0 it finished and looked like it would finish that way from early on. 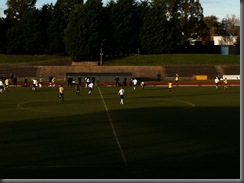 Another ground I had really wanted to see, even though the game was a dreaded 0-0. I really have not much control over my life and locations at the moment so although another trip up to Edinburgh could be on the cards sometime soon, I really couldn’t tell you when! I urge anyone to go see a game at Meadowbank, it is a strange experience, but lets be honest, this is a strange hobby we take part in!

- Referee: Paul Hanlon – 6/10 (quite fussy, cracked down on dissent well though) 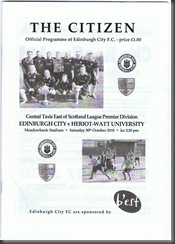