Whoever does lift the FA Cup at Wembley on May 14th 2011, Elmore vs Hamworthy United would probably be one of the last things on their mind. However, the “most famous cup competition in the World” has to start somewhere and for the plucky clubs at Levels 9 and 10 it was an early August in the season where they hoped they could reach the 1st Round proper (they can dream). Unlike last season where I sort of just gave up, I also will follow the clubs who go through each ties in a “Road to Wembley” feature to see how the clubs meet. The game I chose for the 10/11 Extra Preliminary Round was a club that was fairly close by and yet, I still hadn’t visited so a trip to Tiverton’s 2nd team was in order to see “The Eagles” of Elmore. 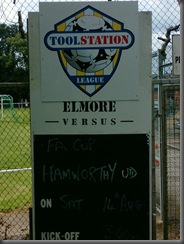 Elmore have a long history in the lower leagues of Southwestern football, as Tiverton Town have been the dominant and bigger club of the town. However Elmore were founded in 1947 to provide sporting and social facilities to Tiverton and bought the land that Horsdon Park lies on today soon after 1958. While not the most successful club in the World, they have won the Western League Les Phillips Cup twice, last in 1998 and were Western Combination League Champions in 1999. I had been prewarned that their home ground of Horsdon Park was a soulless place – however when I arrived it was actually a quite nice ground. Lots of trees covered the surroundings and so it had a nice green feel at this time of year. A decent looking sized clubhouse (although I didnt go in) and a small seated, covered stand down one side of the pitch. The rest of the ground is hard, uncovered stand which is railed off and so comparing it to other Western D1 grounds that I’d visited/seen, Horsdon Park is a fine venue. 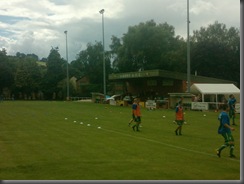 Elmore’s previous FA Cup runs have been non-existent as their last meaningful run came in 2005/ 2006 after dispatching of Tuffley Rovers (now Gloucestershire County League) and Torrington (now North Devon League) they were knocked out 2-1 by Highworth Town. Therefore, after the past few season the Western 1st Division side were looking for a reasonable cup run this season. However, in the days leading up to this game, football and South-west football in particular were dealt a massive blow with the news that ex Elmore, Cullompton Rangers, Yeovil Town, Hereford United and Exeter City striker Adam Stansfield had lost his fight against cancer. I have not heard a single bad word said against Stansfield, even from rivals which speaks volume and his efforts for SW non-league football have to be admired. The Adam Stansfield Foundation has been set up to support this and for Adam to be remembered in the perfect way. With Exeter’s game against Dag and Red called off, fans made the way to other grounds to pay respects, with a large number of them coming here to one of Adam’s former clubs. 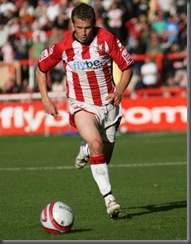 Elmore’s FA Cup 2010/11 would start against a team 1 level higher in the Pyramid than them, Hamworthy United. Playing at Level 9 in the Wessex Premier, Hamworthy hail from a suburb of Poole in Dorset. After finishing in a disappointing 16th out of 22 last season, the Hammers will be looking to rise up the table this time out and started their season with two draws, 1-1 with Lymington Town and 3-3 away at Bournemouth. Compare that to the poor start Elmore had, with a 5-0 home defeat to Oldland Abbotonians and a narrow 2-1 defeat at home to Bridport. This looked an easy away banker, but the FA Cup had thrown up its surprises over its long history… 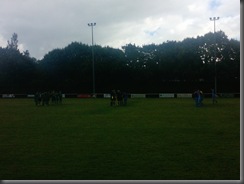 Before kick-off, an impeccably observed minutes silence was held for Stansfield, and when the game kicked off, Hamworthy took the game to Elmore as the hosts were happy to sit back and counter attack with the small opportunities they had. Major controversy occurred on 9 minutes when a Hammers player was bundled down clearly just inside the penalty area, however referee Mr Strout (who looked about 10) gave a free kick and incensed the Hamworthy supporters. From this free kick, the first cross into the box was poor, yet wasn’t cleared properly and when the second cross was headed back across goal, Aaron Corby was on hand to beat the keeper to the ball in make it 0-1. Hamworthy suddenly lost their way though and let Elmore back into the game, with their #8 looking very good in midfield. On 27 minutes, Elmore should have equalized when a cross from the left, found a striker at the back post and his shot/cross went inches wide past the post and outstretched leg of his fellow striker. They went even closer on 41 minutes when Ackerman dropped a free kick and a melee ensued of desperate hacking at the ball and somehow Hamworthy scrambled it away and went into half-time in the lead, somehow. 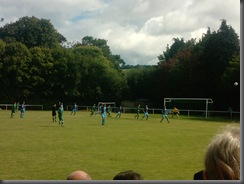 During the half-time break, members from Stansfield’s family I presume gathered on the pitch with all the Exeter fans present to take a group picture from in front of the stand at Horsdon Park. I also noticed a decent food selection being cooked on the grill, which I didn’t have as I was told a burger van would be in operation and so went into the nearby McDonalds for a Chicken Summer Supreme, which was quite nice! The Exeter fans wanted to see Elmore continue their good performance into the 2nd half and got the perfect reward two minutes in when a long throw was not cleared and bounced all the way through the penalty area until Mark Pickford smashed it home from about 6 yards delighting the travelling Exeter fans behind that goal. This did wake Hamworthy up and Elmore were only on level terms for 4 minutes as they retook the lead in what was a sensational 10 minutes for them. Firstly Stuart Cannie put the Wessex side back in front when he finished well after good work down the wing. Elmore then just imploded as Luke Burbidge was allowed time and space to run at the home defence before shooting low into the bottom corner to make it 3-1. On 62 minutes it was 4 as a through ball cut Elmore open and Joe Toghill ran onto it and cracked the ball into the top corner, a fantastic finish at any level. From this kick-off, Elmore immediately gave the ball away and Burbidge was able to roll the ball under the keeper to put the game to bed. Both sides did have chances to add to the scoreline, although the best chance came right on 90 minutes when a brilliant volley from outside the area by an Elmore player cannoned back off the underside of the bar with the Hammers goalie well beaten. In the end though, 5-1 was the final score. 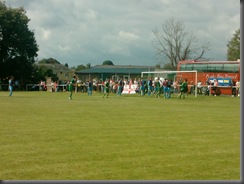 I thought 5-1 was harsh on Elmore as they played their part in this entertaining game, but when you concede 4 goals in 10 minutes, you’re always going to lose. Hamworthy Utd are now at home to Sherborne Town in the Preliminary Round at the end of the month. A good day out at Horsdon Park, helped by the large amount of Exeter fans, in fact the gate of 247 meant this tie was the 4th highest attended game of the round, not bad for a club who rarely get over 60. A nice touch at the end was the Elmore players going over to thank the Exeter fans who had made the journey and “ONLY ONE ADAM STANSFIELD!” rang around the ground.

Photos from Elmore vs Hamworthy Utd 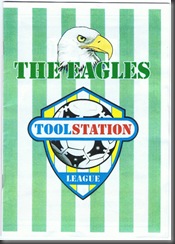