After a long (for my standards) trek to Yeovil in mid-week for Non-League Day I had to stay around the local area and so decided against a re-visit and to head to the nearest National League System (Steps 1-7) that I hadn’t previously been to. So it was a short 20 odd mile drive to the small Devon town of Okehampton to see if the town’s local team could pick up their first points of the season. 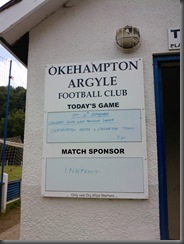 Okehampton is a small town in West Devon that is situated on the Northern edge of Dartmoor. After growing during medieval times as a result of the wool trade and other W.Country supplies, Okehampton grew to a decent size and even has a castle dating from Norman times (although now its a ruin under control of English Heritage). Okehampton today is a popular tourist spot due to its proximity to Dartmoor and used by the Army who train on the National Park. Fans of steam trains would also love Okehampton due to the new service on Summer weekends which links Crediton to Okehampton. The town’s football team, Okey Argyle were founded in 1926 in the hope of having just one football team in the town. Floating around the Devon & Exeter League for much of their history with little trophyware of note (except the Devon & Exeter Senior 1 Championship in 2005/06) they became founder members of the Southwest Peninsula League Div 1 East in 2007/08. After finishes of 11th, 14th and 16th, this season they make the move across to Division 1 West to balance the two leagues out. 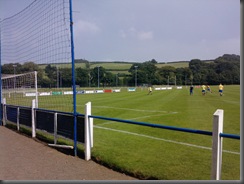 This is despite Okehampton being located near North Devon, they along with Holsworthy find themselves very East in a West division. Their visitors for this game were Cornish side Callington Town (pronounced Kal-ing-ton) who were hoping to improve on an average 10th place this time out. They had started ok to the season, with 1 win (a 5-0 win over Holsworthy) before 2 defeats (1-2 against Vospers Oak Villa and 3-4 against Porthleven). They were 8th out of 16 going into this game, a whole 8 places above rock bottom Oakhampton who were finding life in the “Wild West” tough with 1-5 and 3-6 defeats to Penryn and Newquay respectively. The ground at Simmons Park is a very scenic one, with the tall trees and nice greenery behind one section and a few rugby pitches behind the other. A very nice clubhouse is also situated behind one goal and behind the dugouts is a covered standing area. I noticed that this ground is part of the famous “SWP Hop” over Easter 2011, so if anyone reading this is looking for information about Simmons Park, let me say, you’re in for a treat! 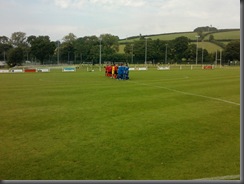 The game kicked off with both sides going for it which is always entertaining to see and we had chances within the first 5 minutes as Callington brought a good save from Okey goalie Harry Geering. The home side went straight up the other end and should have won a penalty when tricky Ghanaian (the only Ghanaian to my knowledge to be playing at Level 11?) Frankie Nomah-Koneh flicked the ball over a defender but it was cleared off the defender’s arm. Referee wasn’t interested. After that scare though it was Callington who began to turn the screw as they were dominating the game and creating more chances to find the breakthrough. That breakthrough came on 27 minutes in bizarre fashion, when an Okey defender almost scored an own goal by heading a cross just wide, Chris Clarke stepped up and whipped a corner straight in. If he’s meant that, what a finish. Callington really began to take advantage of Okey’s inability to defend corners with more being pelted in and Callington could have scored two more times with free headers. Okehampton did ride the storm however and began to press for an equalizer when they had another hand-ball claim denied despite everyone in the ground seeing it. 1 minute later though Okehampton did have an equalizer, when some good work from Ben Waters put through Nomah-Koneh and he finished well under Tom Beman in the Cally net. Okehampton still contrived to go into the break behind as a long lofted ball caught out the whole Okey defence and while Callington’s #9 rounded the keeper, he couldn’t finish off the chance and so cut back to Phil Burgoyne who smashed the ball into the roof of the net. 1-2 at half-time. 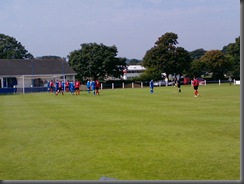 The open-ness of the game continued as both sides still went gun ho as neither could reasonably defend. Callington should have made it 3 when a shot cannoned off the underside of the bar after good work down the wing. Yet down the other end, it could have quickly been 2-2 as a Okey shot deflected just over the bar with the keeper beaten. Callington then started to dominate as they looked for that killer 3rd goal. The game however started to boil over as the referee’s decisions became more and more confusing. On 75 minutes, Callington finally did get that 3rd goal and you couldn’t say they didn’t deserve it. When a long throw in was launched in Phil Burgoyne held the ball up well with his big figure and Chris Clarke ran in and placed the ball into the bottom corner of the net. Less than 10 minutes later and the match finally boiled over when Ben Waters and a Callington player had a little kerfuffle and suddenly Waters was on the floor and the Callington player aimed a headbutt at him. When the whole ground was expecting a red the ref only gave a yellow to my utter bemusement. Okehampton did pull one back on 90 minutes when Nomah-Koneh finally decided not to try and do everything by himself and looked up after he robbed a defender and found Ben Waters unmarked to tap in. However Okey didn’t create any other chances in injury time and Callington took the 3 points back to Cornwall. 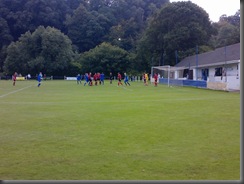 A decent day out in West Devon and a very cheap one too as I finally got to Simmons Park. Although Okehampton are currently now on 0 points from 3 games, they have enough up front to hopefully not finish bottom – although they will probably be down the lower reaches of the table. Callington is a fairly easy ground to get to (I passed it going to Saltash over Christmas!) and so it could be a visit there in the not too distant future if I’m still down here towards the end of 2010. One final remark about “Non-League Day”, it seems to have been a bit of a success which is superb, however it was unlikely to spark much interest down this way, as the nearest FL side, Exeter City, were at home on this day and Okehampton is a bastard to get to via public transport so any casual fans would probably not have looked here. Still, me and 47 other people got to see a great game! 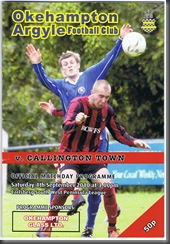