Another year, and another failed MOT. However, it was not the disaster that was last years and so Victor (my humble automobile) lives to fight on. With that good news, I was going to pick up my Devon/Cornwall based ground visits next month after my visit up North to see the girlfriend in Lancaster later in March. (With a cheeky trip to Morecambe’s new Globe Arena too!) However a big head’s up to my father who gave me the money to “go somewhere” and so a look at the SWPL website showed that Alphington, a club based in Exeter were at home that day and I was off to a club that were high up on my “Devon Targets” list. 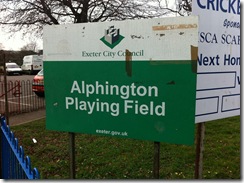 Alphington is a village in the SW of Exeter next to the wards of Marsh Barton and St Thomas. It has two notable buildings in the area, firstly the Parish Church which dates back to the 15th Century. And Mile End Cottage which is the house that Charles Dickens gave to his parents in 1839. The club in Alphington play at The Chronicles which is home to the Alphington Sports Club (which has a cricket and skittles team too from what I saw) and is easy enough to find on the roundabout at Church Road. The Chronicles is a 15/20 minute walk from Exeter St Thomas rail station for those people who want to visit here by public transport (like me for this game) and upon arrival, the football setting here is fairly decent. 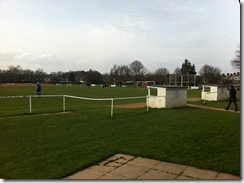 The pitch is railed off most of the way around (except behind the goals as they have to be put up every game) and has some hard standing areas on the dugout/pavilion side. The other side of the pitch is just grass standing, but due to this being a public park, the pitch goes way back and has some kids goals down the far end and even some benches (albeit at a strange angle to watch the game from) down by the far corner flag. The main building at the ground, the HQ of Alphington Sports Club, is split into a clubhouse, tea bar and changing rooms and of course this large pavilion type building dominates the ground. There is even some overhang on the building which can provide covered standing for spectators, although this is a fair bit away from the pitch and you’d have the dugouts in the way. Considering I had seen no pictures of The Chronicles and therefore unsure what to expect, I was quite surprised and happy at this set-up. The SWPL 1st Divisions really do have a mash-up of some quality grounds and some basic places which is just a field with a rail around it. Alphington falls in the middle of this scale and you have to remember it is essentially a public park. (People were avoiding the admission charge by walking through the car park and the gap in the fence or coming over from the other side of the field) As it is a public park, floodlights (needed to make the next step up to SWP Premier and Level 10) is quite frankly a no go. There is also a high amount of residential property surrounding the ground and if an application for lights were to come up, some NIMBY would complain. 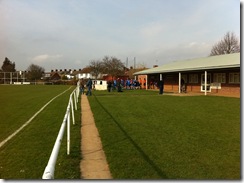 At this current moment though, lights aren’t needed as Alphington sit right in midtable in Southwest Peninsula Division 1 East and aren’t likely to trouble the promotion chasers anytime soon. They came into this game in 12th (out of 16) place but a massive 14 points clear of bottom side Axminster. They also had some games in hand on teams around them and so should finish the season higher up than 12th place. Amazingly as well, despite being down in the lower reaches of the table, they still had a positive goal difference after scoring 31 goals and conceding only 30. Their opponents, Exmouth Town I had seen less than a month ago when they dispatched Ottery St Mary at their Southern Road ground. Since then however, their former manager Jason Margrett resigned due to a job opportunity with security forces away in international waters that was “too good to turn down”. Good luck to him there and good luck to Exmouth’s new manager Adrian Pullin. Since taking over Pullin has won 1 (3-2 vs Crediton) and lost 1 (0-1 vs Budleigh – their Jurassic Coast rivals) whilst continuing to play in goal and Exmouth continue to float around in mid-table. 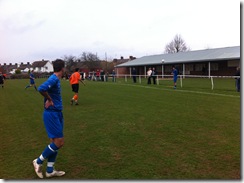 I was interested to see how different Exmouth would be since I last saw them and they immediately were playing a fairly high line which almost got caught out within the first minute of the game as a long ball over the top of the defence caught the Exmouth back line static and the Alphi striker could only fire over from his first time lob shot. After this it began to get inevitably scrappy as both midfields were trying extremely hard to dominate the game. What we needed was a goal to spice it up or risk seeing this game turn into a bore. On 12 minutes we got a goal, and quite probably the best goal I am going to see this season. When Exmouth only cleared a corner to just outside the area, there was a danger that the ball could be played straight back in. Yet when Grant Leslie saw the ball coming to him from the half cleared corner he was only thinking of one thing. Shooting. And his first time left foot volley hammered straight into the top corner. Pullin didn’t even move. A sensational strike. After that, Alphington let Exmouth come onto them and the game really opened up as while Exmouth had the possession, they couldn’t utilise it effectively, much to the frustration of their #10 who spent the whole game moaning and screaming his head off at misplaced passes or when the ball wasn’t crossed into him. By the end of the game, the whole Alphi management team were laughing at him as his moaning was a tad embarrassing. Alphington were still a threat in the 1st half, especially on the break, summed up best towards the end of the half when Alphi broke from an Exmouth corner and the long range shot that came in cracked off the top of the bar and away to safety as Exmouth were given a warning for the 2nd half. 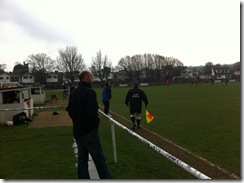 As expected for the 2nd half, Exmouth came out the blocks and searched for an equaliser as it was all them to begin with. Yet again though, a poor final ball cost them as the Alphington goal was largely untroubled despite the home side having very little of the ball early on. You wondered if Exmouth would regret it and low and behold on 64 minutes, Alphi went up and scored another contender for “Travelling Fan’s goal of the season.” Take a bow, Phil White after he was teed up outside the area, his shot launched over Pullin and crashed into the roof of the net. Again Pullin had absolutely no chance and Alphi were now 2-0 up. Exmouth did let their heads drop slightly as two wonder goals had seriously did them damage in this game. They were still a threat however as an Exmouth free kick was headed on and Alphi goalie Matt Slark was on hand to make a good save. One of the only ones he needed to make all game. Towards the end it was still Exmouth pressuring for an equalizer but the game petered out and Alphington secured a good home win. 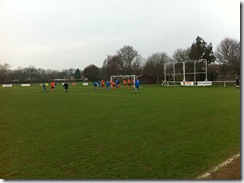 A decent game on a bonus of a day out as a close-by target was ‘ticked-off’ with Alphington. A delightful club as everyone I spoke to who was involved with the Scholars was very friendly and an extra credit to Alphi club lino, D Atkins who was informing me of the scorers as they went in. Top man. Exmouth have some work to do, but can feel slightly unlucky in terms of this result as apart from the wonder goals, it was fairly evenly balanced. Another good club I urge people to visit if they have time to in Exeter. A footballing hotbed in the South-West!

Photos from Alphington vs Exmouth Town 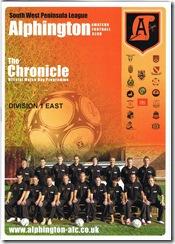