My final weekend in Devon. A weekend that I wanted to just relax before the mayhem began and picked a local game that wouldn’t cost much, wouldn’t require much thinking and more importantly not much travelling. It was down to the North Devon League again to provide 90 minutes of entertainment as it was one I had ignored most of my time here. Looking at a map, I lived near Dolton. I’d never heard of the place either. Off we went. 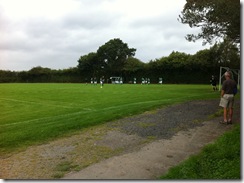 Dolton is a small village in the Torridge District of Devon just south of Torrington. It is twinned with Amfreville in France and Hillerse in Germany and has a population of around 900 inhabitants, including the Rolling Stones drummer Charlie Watts. (Does he? Really!?) The ground or, The Playing Field is situated in the south-west end of the village right next to St Edmunds Parish Church and down a tiny little track to come out where that man in shorts is standing in the picture above. Expecting very little except a field with goalposts, the ground is actually really surprising and would need little work to bring it up to standard for Level 11. The main focal point of the ground is the pavilion (see picture below) which houses both changing rooms and can also, apparently, provide tea and coffee, although there were none on this occasion. The pavilion also has a decent underhang section which provides a fairly decent view of the pitch, albeit slightly away from the action. Across the other side is another piece of cover which is a wooden shelter and is right next to the pitch and so provides excellent views! Considering I expected little and got a smashing ground in an excellent setting and some spectator facilities, this was an excellent start. 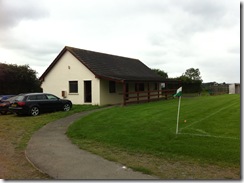 Dolton are only in their 2nd season back in the North Devon League Premier after spending just one season in the Senior League (which they came 2nd in). After a finish of 11th place last season they had started the season, four games in, with an average start. One win (against Shebbear United), two defeats (against Appledore Reserves and Torridgeside) and an excellent 4-4 draw against North Devon champs BOCA Seniors. With some decent form, Dolton looked a fairly decent team on paper and should have provided some challenge to the visitors, Bradworthy. Based near Holsworthy in the arse end of N.Devon, Bradworthy had the same start as Dolton picking up 4 points in the run up to this game, but played a game less. A win against North Molton, a draw against Shamwickshire Rovers (away) and a defeat to Shamwickshire (at home) set them up nicely for this game. 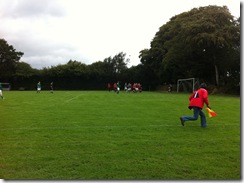 The North Devon League is not going to be blessed with Messis and Kevin Kyles, but all I want to see is effort and both sides gave that to begin with. Dolton started brightly as both defensives looked exposed and so goals looked likely. (I’ll explain later why I really wanted someone to score here) After a bright 10 minutes though, Dolton started to be pushed back and Bradworthy hit the post after the home goalie and defence didn’t communicate. Dolton’s back line came under more and more pressure though as they really were shambolic as more good Brad chances came and went until just before HT they finally took a deserved lead. Some excellent passing play cut Dolton’s defence to pieces before Gary Clarke received the ball in the area and finished with aplomb. Being 1 goal behind at HT was a blow to Dolton, however the 2nd goal, just one minute later killed the game off basically. A long ball from Bradworthy bounced towards the Dolton right where Nicholas Lapham looped a ball back into the box. The cross however took a nick of a defender and looped over the goalie and in at the back post to give Brad an unlikely 2-0 lead at HT. 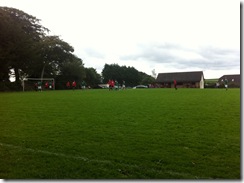 2nd half was played in the rain as the clouds finally came over as Dolton went looking to get a goal back. They did create chances but they seem to be the Arsenal of Devon as they were trying to walk the ball into the net instead of testing Brad goalie William Radford who had made a brilliant save just before HT when he palmed a header onto the bar and over. Dolton’s best chance of the game came on 70 minutes when their striker Charlie Tubb was put through 1 on 1 with Radford but fired wide, much to the disbelief of the home bench. Just a minute after that chance though, it was game over. Tudor Placinta ran down the right wing skipping past all of the Dolton defence and he lofted the ball over the keeper and the ball rolled in. While Brad celebrated their 3rd and 3 points, there was concern for a home defender who clattered into the post a la Phil Babb, although the player screamed in agony, he did continue to play until the final whistle where Bradworthy cruised to 3 points. 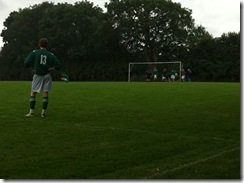 Although my final game in Devon was “keeping it local” (or ‘barrel scraping’) it was enjoyable and when I am back visiting there, I would happily take in more games and grounds in the North Devon League. This game also saw me break my record for games in a row without a 0-0 bringing the running total to 26! Since this game, Dolton have won another game against Torrington before crashing to a 3-1 defeat at home to Ilfracombe Town Reserves and were in 11th (out of 16) place, although had played 7 games which is the most in the league. Bradworthy had only played once since this game which was a poor 2-1 defeat to Putford and so Brad were only one place higher in 10th and with 7 points too. (Although they had two games in hand). And Devon, that was it. For now. My next game and games after that for the foreseeable future would be in and around the big smoke as I am going to see what grounds it has to offer.

Photos from Dolton vs Bradworthy

- Food: N/A – None served, if you do come there is a shop nearby

- Referee: L Cousins – 6/10 (refereed well, and gave support to some players too)