When Hearts announced that their pre-season tour would take them to Germany before playing two Premiership teams in Bolton and Sunderland at home, it was no surprise as the Jambos had travelled over there in the past 3 seasons. However, when a rumour appeared that we would play Plymouth down in South Devon I got a little bit excited. That excitement rose when it was officially announced that Hearts would travel down to the South Coast to play two friendlies against Southampton and Plymouth Argyle. The first game on a Saturday afternoon would be a trip to the Hampshire city of Southampton. A coastal port which is one of the largest commercial ports in Europe also houses The Mayflower theatre and the Hall of Aviation. We made the trip on the train from Tiverton Parkway to Southampton Central to see not many Hearts fans around whilst walking to the Stadium but as we arrived it was clear a decent number had turned out for the extremely long trip from Edinburgh.

I had first visited St Mary’s Stadium last season whilst visiting a friend who lives there. That day, they played out a dire 0-0 draw with Barnsley with both teams unimpressing and then became my tips to both go down. In the end, financial troubles caught up with Southampton and they finished 23rd in the Championship and were ultimately relegated. More troubles were to come to them however as administration beckoned and will start this season on –10 points in League 1, but at least they still have a club to support after new Swiss owner Markus Liebherr came in to save them from liquidation. They play their home games at St Mary’s Stadium which was built in 2001 after their move from their old ground, The Dell. St Mary’s, despite being one of these new “modern bowl” grounds, is fairly popular with fans as it is clear money has been spent on this rather than building a new stadium on the cheap. UEFA also seem to think so as the ground holds a UEFA 4 * award which not many in this country do. The ground is a bowl, connected all the way round with the two stands behind the goal called the Chapel Stand and behind the other where the vocal fans sit called the Northam Stand. The two larger stands that run down the sides were the only two open today for Saints fans which is the main Itchen Stand and opposite it is the Kingsland Stand. 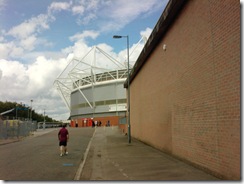 I looked forward to seeing a fairly new Hearts side which can only be described as a “work in progress” with many players leaving over summer and five new guys coming in. Ian Black (Inverness CT), Suso Santana (CD Tenerife), Dawid Kucharski (Lech Poznan), Ismael Bouzid (Ankaragücü) and David Witteveen (Red Bull Salzburg) joined the JT’s. So far, Hearts pre-season results at least hadn’t been that impressive with only one win in four, that against German lower league team SC Goslar, while defeats had been suffered to Slack Wroclaw, St Pauli and Alemannia Aachen. It would be interesting to see how Hearts played in these two South Coast games as the opening game of the season against Dundee Utd on August 17th would be fast approaching. It was also good to see a large travelling support for Hearts, we had been given a small corner in the Northam Stand which was pretty much full as the photo below shows. (Not my photo – from Hearts FC) 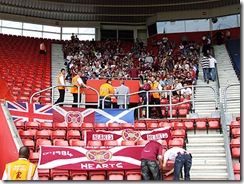 The game kicked off with Southampton battering Hearts to be frank, we struggled to get out of our own half and the Saints were playing with no fear as new boss Alan Pardew looked on. Meanwhile, the banter between the vocal Saints fans nearest us and the Hearts fans were in full flow and credit to the Southampton fan who made the effort to buy a Hibs top and sit as near as he could to us. He got dogs abuse but took it well. The Southampton pressure paid off after 13 minutes when Adam Lallana received the ball just outside the edge of the area, the Hearts back 4 did nothing to close him down and he shot low into Balogh’s right corner to make it 1-0. Hearts then proceeded to do little else in the 1st half with David Witteveen up front on his own being provided with no service or support. Southampton were then given a free kick right on the edge of the area after Bouzid had brought a Saints defender down. The free kick though was well saved by Balogh. Half time, we were 0-1 down in quite frankly a terrible half of football and the 300 or so Hearts fans hoped that would be improved rapidly. 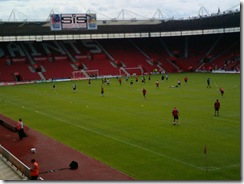 The second half kicked off with 4 Hearts subs, as is always the case in pre-season with endless subs. It was also an improved start as Hearts actually managed a meaningful attack on the Southampton goal with Ruben Palazuelos and Suso Santana impressing. The pressure should have paid off when Michael Stewart played a one-two with Palazuelos but was then elbowed off the ball by a Saints defender before he could recieve the ball. What should have been a penalty was ignored by referee Steve Tanner who quite frankly was atrocious today and must have missed the blood pouring down Stewart’s face. Both teams then continued to make substitutions in the 2nd half with Hearts bringing on more reserves and also Andrew Driver who made his first appearance since playing for England in the U-21 Euro Championships over the summer. Southampton then won a free kick after Lallana dived on the edge of the area that Tanner was happy to give. From this free kick Grzegorz Rasiak was left unmarked who headed past the helpless Balogh for number 2. The game then looked to be heading for an uneventful last 15 minutes when a superb attempt at slapstick comedy allowed Saints for their 3rd. Firstly Balogh threw the ball over the left wing which was far too in front of Jose Goncalves at left back and well behind Driver on the left wing. Lallana stole the ball, skipped past Goncalves’ laughable attempt at a block and found Rasiak again who had another free header for number 3. Game well and truly over, thankfully. 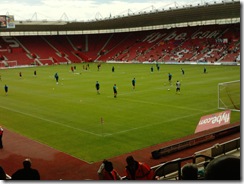 In the end, it seems Southampton wanted this more than Hearts who bimbled around with no real structure or urgency. What I didn’t know during the game is that Southampton start their season a week ahead of us on the 8th August and so should now be nearly ready for the start when they host Millwall on that day. Hearts on the otherhand need to improve, and fast, with 3 more pre-season games coming up before our opener against Dundee Utd. Another striker is desperately needed and this looks to be rectified with the announcement that two Portuguese trialists have come to train with us. Hopefully an improvement will be seen at Plymouth, and also a thank-you for coming down, as at full time the players went straight off the pitch without thanking the 300 or so Jambos who made the trip which peed us all off. A “work in progress”. It sure is. Good luck to Southampton this season.

Photos from Southampton vs Hearts

- Ground: 9/10 (probably the best of the new type stadiums bar The COMS)

- Atmosphere: 7/10 (good banter between Saints and Jambos - “who’s the poofter in the skirt” is a great chant)

- Food: N/A – Had a Nando’s before the game - recommended