In my run up to moving to London, it was clear that I needed to drive to the big smoke and dump all my crap there otherwise it would stay in Devon. Picking Tuesday 23rd August to do it was made well in advance, but then closer to the time, the football fan in me began to investigate matches on in London and low and behold, my boys from the North-West were in town. This then became a test run of the many games I’d get to around London this season, but it wasn’t an ordinary test run, it was going to Millwall, as an away fan. 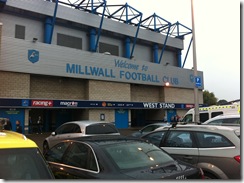 Millwall is an area in London, on the western side of the Isle of Dogs, in the London Borough of Tower Hamlets. Originally known as Marshwall, its name derives from the large number of windmills built on the river wall, in the 19th century. Corn was brought along the River Thames to be ground into flour here, before being delivered to the bakers. In the 1860s the large Millwall Dock was built, extending from the Thames at Millwall into the centre of the Isle of Dogs. The spoil from the dock was left as the Mudchute. Like other parts of the Isle of Dogs, substantial redevelopment has been more or less ongoing since the 1980s, resulting in modern industrial and commercial buildings and hastily constructed contemporary housing beginning to dominate the remaining early 20th century "two up, two down" homes that once housed the dock workers and supporting communities of this area. However, mention ‘Millwall’ to most people and they instantly think of the club… 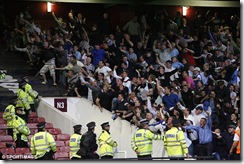 Founded in 1885 as Millwall Rovers before changing their name to Millwall Athletic in 1890 before dropping the Athletic in 1910. Their old ground of The Den was one of the most feared (or rundown shithole – delete as appropriate) grounds in the country and was never a nice place to go to. Having left for The New Den in 1993, they now play at the 4 standed all seater in South Bermondsey. Being in this new area allows away fans to actually be taken from the rail station of the same name and trundle to the ground in fear or proudness before entering the lions den. To be fair, now The New Den isn’t that tough a ground to go to. The Den was the first new all seater stadium to be completed after the Taylor Report on the Hillsborough disaster. It was designed with effective crowd management in mind (given Millwall's crowd problems at the Old Den), with the escape routes being short and direct. Millwall have had some success on the field (at both grounds) reaching the FA Cup Final in 2004 (before losing to Man Utd) and qualifying for Europe the next season. (Where they were knocked out the UEFA Cup by Ferencváros who then ironically knocked Hearts out) Of course, it’s hard not to talk about the hooliganism with the 1985 riot at Luton’s Kenilworth Road and the 2009 Upton Park riot against West Ham in the Carling Cup and other various incidents too. There is discussion though that a lot of the image and “fear” of ‘Wall is down to media sensationalism with the likes of scumbag papers such as The Sun and The Daily Mail. That though, is a discussion for another blog. This was the 2nd Round of the Carling Cup and Millwall had dispatched of crisis club Plymouth with a 1-0 win in Devon where as my boys (in terms of who I would be supporting for this game) had knocked out Championship side Barnsley 2-0 at the Yorkshire club to set up this mouthwatering clash. Around 60ish (including me) Shrimps fans made the journey down (or across town) to hope that they could add Millwall to a growing list of impressive Carling Cup scalps which include Preston, Wolves and Coventry. This was also the first time (of hopefully many) that I would be seeing Jim Bentley’s revolution before my eyes after their impressive start to the season which left them right in the Top 6. Before the game, I was pre-warned by the two friendly stewards about the typical FL food and prices so popped before KO the Millwall Cafe for an excellent chips in curry sauce for only £2.50. Recommended! 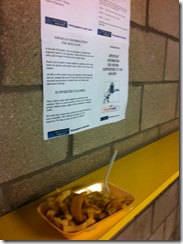 (Some nice reading material for away fans)

As for the game, it wasn’t as much as a walkover for Millwall as I have read from some reports. Morecambe actually had the better start when Danny Carlton hit a shot from outside the area which just went wide. From then on though, the home side began to get the better of the play although they were not helped by two useless strikers (in my eyes) up front in Josh McQuoid and John Marquis. Barry Roche had made some good saves before Millwall took the lead in fantastic style. Kieran Charnock gave away a pointless free kick around 25 yards out (see picture below) and up stepped Hamer Bouazza who brilliantly curled the ball into the top corner and gave Roche no chance. Had Morecambe gone into HT at just 1 down, they would have had a decent chance however they conceded a killer 2nd right on HT which was a joke goal. When Marquis fell in the area and just lay there, I was a tad surprised that Millwall didn’t kick the ball out, especially as it was a head injury. I was even more surprised that the referee didn’t stop play. When Tamika Mkandawire received the ball on the edge of the area and smashed it into the bottom corner, Marquis was still on the floor in the 6 yard area and so was offside as he interfered with play. (Check the rules). Amazingly though the goal stood and Morecambe then faced a real uphill struggle for the 2nd half. 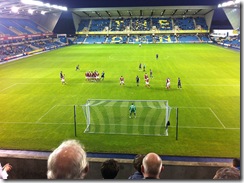 Morecambe still kept a lot of their good possession in the 2nd 45 minutes but were still getting hit on the break when they got to the final 3rd and couldn’t really produce anything to properly trouble the Millwall backline. When they did lose the ball though, ‘Wall’s nippy and fast counters did trouble Morecambe and Roche again had to make good saves from McQuoid, amongst others. Millwall though did offer some pity chances though, mainly through their hapless 2nd choice goalie Steve Mildenhall who managed to spill and fumble some easy shots from Carlton and show why he is always going to be a #2 goalie. The game fizzled out though as Millwall were easily through and Morecambe enjoyed their trip to the capital. 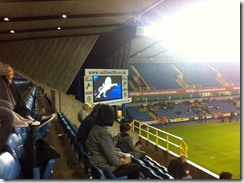 Millwall were through to Round 3 of the Carling Cup and were given a tough draw with an away game at Premiership side Wolves who do seem to be taking the League Cup seriously this season and will give the Lions a real test. As for Morecambe, it’s hard to judge their season based on this game. One cup match against a team two leagues higher up but since this game they have continued their excellent start to the season and it’s looking good for Jim’s Red Revolution. I got in and out of the Lion’s Den safely to see Morecambe another day. I’ll see them in Dagenham soon.

Photos from Millwall vs Morecambe

- Value for money: 7/10 (fair play Millwall for reducing the price)

- Programme: 7/10 (a strange fold-out one which turns into a Millwall poster) 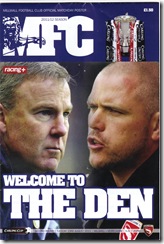