This was set to be the last Saturday for some time (due to various reasons) that I would actually be able to see a game and so there was a decision to make where I actually took myself. The problem was lack of suitable games (even I have a limit, yes seriously) and was all for heading up to Manford Way vs Kelvedon Hatch in the Essex FA Premier Cup (yeah that barrel was getting scraped!) until I noticed a possible FA Cup story coming from just south of Watford as Level 9 side Oxhey Jets were taking on Level 7 heavy hitters Hendon FC. Decision sorted. 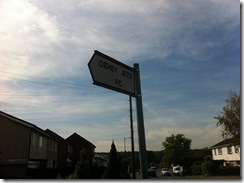 South Oxhey is a suburb of Watford in the Three Rivers district of Hertfordshire and is also close to the boundary of Greater London. (London Overground provides services through S.Oxley) South Oxhey is a large estate built on land that was formerly part of the Oxhey Hall Estate. There was a manor house here, Oxhey Place, and a chapel. The manor house was owned by the Blackwell family of Crosse and Blackwell fame before it burnt down in 1955. Oxhey Chapel dates from 1612 and is still standing to the south of the parish church of All Saints. The church was opened in 1957 to serve the new estate built after the Second World War by the London County Council. The church was demolished and rebuilt in 2000. South Oxhey also shot to fame (of sorts) in 2009 when British choirmaster and broadcaster Gareth Malone came to South Oxhey (seriously) to form a community choir and film the series The Choir: Unsung Town. The South Oxhey Community Choir and the South Oxhey Youth Choir were the two groups assembled and both still continue to perform today. 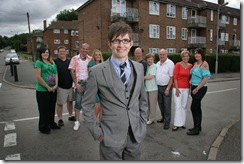 (Malone keeps it real in S.Oxhey)

The town’s footballing side, the Oxhey Jets were established in 1972 and have floated around the regional leagues all of their existence. Currently members of the South Spartan Midlands League, they actually hold a place in the top flight of that league and so play at Level 9 in the pyramid. They only entered FA competitions from 2005/06 and so their best run in the FA Cup was actually to the 2nd Round Qualifying when they reached this stage in 2006/07 and of course, this time out too. Their Boundary Stadium isn’t a classic, I’ll get that in now, but it is a reasonable ground. Located right next door to a swimming pool (which was very tempting considering the heat when I went!) the ground has a stepped terrace right at the entrance which provides decent views as well as two medium sized covered areas, one an actual stand, the other a larger standing area (although set back from the edge of the pitch strangely). They also have a silly seated identikit stand in the corner of the pitch which is probably only there so they meet FA ground grading rules while the rest of the ground is uncovered hard standing. 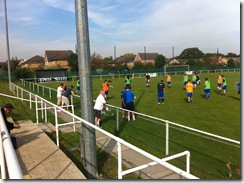 To reach here, the Jets had already dispatched of Wodson Park, Great Wakering Rovers and Hertford Town before coming up against one of London’s best known non-league sides and a side that play two levels above them. Hendon FC have had a tough few years recently, firstly they were forced to move out of their Claremont Road ground in 2008. The ground had been sold to property developers in 2006, but a deed of covenant protecting the ground had been in place which (currently?) puts an end to the property idea. They had wanted to move to the Barnet Copthall Stadium (currently being used by Kentish Town, one day, TTF will be there, one day) but once they realised that was too pricey, they didn’t really have a ground of their own. They currently groundshare at Wembley FC’s Vale Farm and have a long term agreeement there. Added to that, some disappointing league finishes (they only finished 15th in the Isthmian Premier last season), you would be forgiven for feeling a bit for Hendon. This season though they were doing well, going into this game in 2nd and only one point behind Lowestoft Town and reaching the 2nd Qualifying Round of the Cup. This was set up nicely and the record crowd of 376 were treated to some exceptional October weather. Excellent. 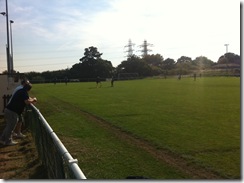 The majority of the crowd were enthused by the good start the Jets made too, with some good passing moves giving Hendon something to think about. The Isthmian League side did have two good strikers up front in Elliot Charles and Greg Ngoyi who were causing the home defence problems with the movement and passing. The slickness upfront was beginning to pay off as Hendon now had the majority of the possession and so chances began to fall their way, although they were few and far between in the 1st half. Elliot Charles had a header just over the bar from a good cross from Carl McCluskey and that seemed to be it for the half. Then right on HT came a suspected killer blow. James Archer released Ngoyi down the right and cut inside Andrew Lomas to drill in a low cross towards the near post. Elliott Charles was quickest to react to the situation and, having got in front of his marker Steve Brown, fired a low shot just inside the near post. Oxhey looked devastated at conceding right on HT so was it game over already? 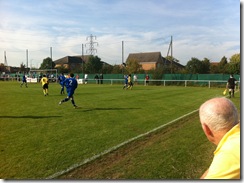 The short answer was no. Although Gary McCann made a double substitution at HT bringing on Casey Maclaren and Byron Bubb, the Jets made an immediate impact and scored an equalizer. Andrew Lomas got sent away down the left and he sped past a fair few players before he pulled it back to Lewis Putman who’s low shot found the back of the net and the home fans went mental. (Putman, ironically in these situations, made a few appearances for Hendon last season) While the Jets started to believe they could pull off a major cup coup, the heat was easily beginning to win over with the game slowing right down to a walking pace. That being said, Hendon did fire home a goal and the winner around the hour mark to book a place in Round 3. A free kick was floated in and Charles won yet another header to flick the ball on. Ngoyi reacted quickly and, after allowing the ball to bounce, but before Brown could get in a challenge, drilled a shot across Mark Jessop in the home net via a post. Oxhey did push forward for their 2nd equalizer as Shepherd and Bellotti had good chances but they were dealt with comfortably by Sean Thomas. While the sun began to set, Oxhey’s FA Cup run came to a close and while they could be proud of their decent performance, the better team won on the day. 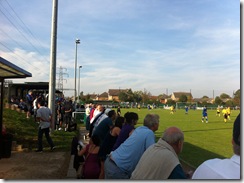 Hendon’s reward for this win was a 3rd Qualifying Round tie against Maldon & Tiptree which they won 3-1 and so were today really rewarded with a top 4th Qualifying Round tie against Blue Square Premier side Luton Town. They will probably get hammered, but what a great experience for them. As for Oxhey, it was a decent day out at a friendly enough club. Will I ever come back here? Most likely not, but I will see them out and about I’m sure.

- Referee: Adrian Piggott – 6/10 (can’t remember him doing too much wrong) 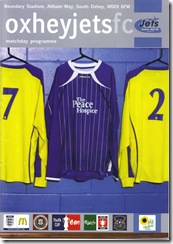