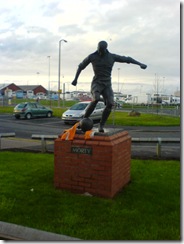 That is a picture I took of the statue of Stan Mortensen outside Bloomfield Road when I visited Blackpool in 2007. “Morty” is most remembered for his part in the ‘Matthews FA Cup Final’ in 1953 when he scored a hat-trick for Blackpool to win the game 4-3, despite being 1-3 down. Overall he scored 197 goals for Blackpool in 317 appearances from 1941-1955.

Bloomfield Road is a stadium that is near me during term time but have yet to visit for several reasons. Firstly, is the price, as according to Blackpool’s website the cheapest ticket for me would be £28 which for the Championship is ridiculous. Also, with several closer grounds such as Preston and Bamber Bridge, which appeal to me more. So it will be a while most likely before I return to Morty’s old stomping ground but it always pleases me to see great players from the past commemorated like that.