While the league was dribbing (I’ve just made that up) towards the end of the season, for May Day Holiday I was keen to get out and see another game/ground but looking at the fixture lists there didn’t seem that much on. One game however was being played at SWPL Premier side Cullompton as they welcomed Cornish side Falmouth who were going for 4th place in the league and therefore some prize money at the end of the season. With that up for grabs and the fact I hadn’t been to Cullompton yet, it was time for another car journey to East Devon for this end of season fare.

Cullompton is a town in Mid Devon, lying on the River Culm and next to the M5 motorway around 12 miles from Exeter. Cullompton has a long history of manufacturing, first with wool and cloth manufacture, then later leather working and light industry. The street plan of the town still reflects the medieval layout of the town. Most shops lie along Fore Street with courts behind them linked by alleyways. The length of the high street reflects the prosperity of the town from the sixteenth to the eighteenth century when it was a centre of the cloth trade. There are two grade I listed buildings in Cullompton: the fifteenth century parish church (St Andrew's) and the Walronds at 6 Fore Street. There are also seven grade II* listed buildings and ninety grade II listed buildings.The centre of the town is a conservation area - the only one in the Mid Devon area. 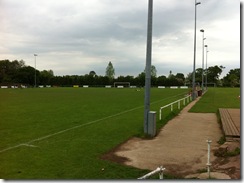 Cullompton Rangers’ ground, Speeds Meadow is situated to the south of the town and the whole area is a sporting place with Cullompton Cricket Club also on site next door. There is 3 football pitches, the main one I’ll come back to in a mo but the 2ndary pitch is to the right of the main one in the picture above while the 3rd is hidden by the trees behind the far goal. The main pitch where Cully play their main games such as in the SWPL is also fairly decent. Railed off most of the way round (apart from the gap in the pic above) and with a decent amount of hard standing. There is a small stand opposite the clubhouse which provides covered seating and a tiny area to stand in although the views aren’t great if you stand unless you’re right at the side. The clubhouse is fairly spacious with a tea room in the back selling some decent stuff. That being said, it’s location is right next to the M5 and the South-West Main Line inbetween Exeter St Davids and Tiverton Parkway rail stations. This means the constant sound of traffic whizzing by and then a train speeding past every now and then means it feels a bit soulless here. It’s not their fault, but it does add to the poor vibe around the place especially as the atmosphere is traffic heading north. 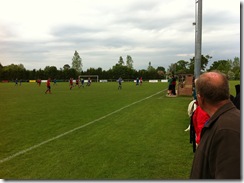 It does look like a general struggle out there at the moment for Cully. On the pitch they were right down there and going into this game in 16th, but clear from relegation for another season on 36 points. After playing some time in regional football they were founder members of the Devon County League in 1992 and even finished 2nd twice in 1998 and 1999 under former Exeter City player Ray Pratt. Since those days however, Cullompton have finished in the lower reaches of the league but did amazingly finish 7th in 2006/07 to qualify for the newly created Southwest Peninsula League Premier where they have struggled ever since. They came 2nd bottom last season but were not relegated as Clyst Rovers pulled out the league mid-season. It does seem to be hard times for Cully at the moment, the programme noted, “next season will be a real challenge for everyone as the cost of staying at our present level is becoming more and more expensive and we must search for new revenue streams…” While that sounds bad enough they are also considering pulling their 3rd team out of the D&E League (in Div 5, currently in 11th (out of 15) with 1 game to play) and folding them. Not the best of times for Cullompton Rangers then. 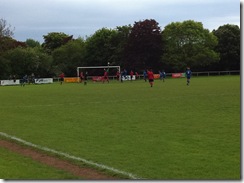 They welcomed a team with a fine history and until Truro City became pumped with money, they were arguably Cornwall’s finest club. Falmouth Town actually played Western League football between 1974-1983 and actually won the Western League 4 seasons in a row between 1974-78. As well as reaching the FA Cup 1st Round on 3 occasions, the past was really great for Falmouth. Since dropping back to more of a regional level they have won the odd title (last coming with the South Western League in 1999/2000 and although 2008/09 was a tough season, coming 14th in the SWPL Premier, last season’s finish of 3rd and coming into this game in 5th, with a small chance of nicking 4th of Torpoint showed they were still a decent club. With a ground of 3,572 capacity of Bickland Park, a Top 5 finish should be the least they were aiming for. 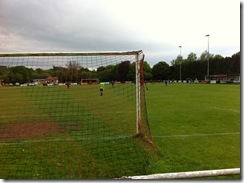 Watching Cullompton this season would pretty much guarantee you goals. They hadn’t been involved in a 0-0 so far all season. (This was their final game) And had been on the receiving end of some absolute hammerings such as an 11-2 defeat away at Penzance and a 10-1 defeat away at Plymouth Parkway. Falmouth had won the first game in Cornwall 6-1 and had to win their 2 games in hand over Torpoint to take the fight for 4th place to the final day. It was no surprise then when Falmouth started like a house on fire and should have lead after 4 minutes when Adam Pryor was put through but fired wide with an awful finish. Cully nearly went up the other end and ripped up the form book when a cross came in and was undealt with until a Cully striker at the back post headed the ball into the ground and it agonisingly bounced over the bar. That miss was costly though as Falmouth went up and scored on 8 minutes. A cross from Karl Turner and while Cully goalie Joe Moore was in no man’s land chasing shadows, Sam Reid headed the ball back towards goal and Mark Holland tapped into an open net. It was all Falmouth now and 10 minutes later it was 2-0 after some head tennis in the area saw the ball land with Dan Green who controlled and swivelled to fire the ball past Moore. Cully were really getting an absolute roasting and on 25 minutes it was 0-3 when a free kick put into the box by Karl Turner saw Craig Duff react first and beat Moore to the ball to fire a header in. Falmouth then just let the game settle down and plod along to HT at 3-0 up and it was one of the most one sided games I’d seen. 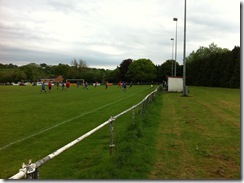 The 2nd half saw the match played under a wee bit of rain so while I took cover under the small stand at Speeds Meadow while Cully actually started the half fairly well (although they couldn’t be much worse from the 1st half) as they tried to get back into the match. While these were mainly long range efforts that barely troubled Falmouth goalie Jason Chapman, at least Cully were trying to give it a go even though they could be probably playing now and still haven’t scored. In the end when Falmouth needed to up the tempo and put Cully under pressure, they did and added two late goals to give the scoreline some gloss. Firstly on 72 minutes Duff was fed to the edge of the area by Hollands and his low shot beat Moore to make it 4. The home fans around me where confused why Moore hadn’t even dived to save the shot which wasn’t that far from him. Moore didn’t have the best of games and its easy to see why he’s conceded so many goals this season. #5 was added on 85 minutes after some excellent work from Duff(man) to waive past a few poor defenders to set up Hollands to slip it under Moore and round the scoring off. Falmouth did add a 6th in injury time when a striker slid in from a cross from the right, but was given offside. It didn’t look it. 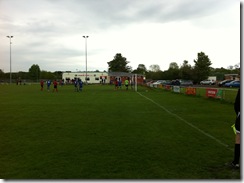 A comprehensive win for Falmouth then as they kept the pressure on 4th place and went into their next midweek game against Plymouth Parkway knowing that had to win that game too. As for Cully, a nice enough club. Everyone I spoke to was very friendly and it was good to visit the nearest SWPL Premier side to me I hadn’t been to before the end of the season. However, I do worry for them. Poor crowds and some finance needed may mean they plummet next season and finish bottom of the league. Level 11 is probably best for them where they can regroup and hopefully don’t drop further into the D&E League and into footballing nothingness forever more. I hope for them, that they can survive at this level. 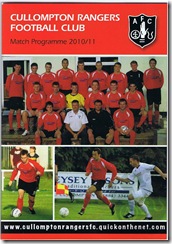