Back up in the North of England again and I decided to try and reach most of the closer grounds that I hadn’t been to from Lancaster. One that I had wanted to do ages ago was deep in the realm of pie and gravy, i.e – the Unibond League. AFC Fylde had been one that got away so far, with various trips planned and then cancelled due to money issues or the weather and even going to see Hearts, after I had planned to visit here when Lancaster City came in December, but a trip (foolishly) to Hamilton won the day. However, despite the weather being crap at the moment and nobody at university wanting to come to the Fylde Coast, I was undeterred and made the short(ish) trip deep into Fylde County. 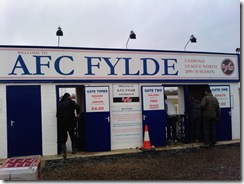 Although AFC Fylde are actually based in the middle of nowhere (more on that later), they are officially mapped as being part of the Lancashire town of Warton which is a struggle to write about anything noteworthy there! (Sorry people of Warton) Apart from the BAE Systems base and airfield, the town is just in-between Preston and Blackpool and so can claim to be “THE team of the Fylde Coast”. AFC Fylde have come a long way in a short amount of time after being founded in 1988. Originally known as Kirkham & Wesham FC, they tore apart the West Lancashire League until being accepted into the Northwest Counties League in 2007/08. That season they were promoted to the Premier Division of the Vodkat League, but their FA Vase win over Lowestoft Town was a major highlight as they came from 1 goal down to win 2-1 at Wembley in front of a crowd of 19,537. Another promotion last season after winning the Vodkat Premier sees them make their Unibond debut this season and they have had a slow start and came into this game in 14th place (out of 22) with 22 points. Fylde also have big plans as they want to be a Football League club by 2022 (when I would be 32!?) and new manager Kelham O'Hanlon also took charge of his first game today to maybe start another bright chapter. 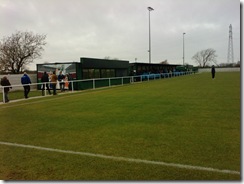 Having been on a decent run of getting to grounds without getting lost, I was always expecting that run to bite me on the ass and it really did trying to get to Kellamergh Park after coming off the M55. What should have been a gentle drive through the Fylde Coast ended up with a tour of obscure Fylde villages and only ending up a Kellamergh Park at 2:40, touch and go! Kellamergh Park is a strange ground, with it being in the middle of nowhere, literally nowhere. It appears to have once been a farmers field that football extras have been added to later on to give it a strange feel. One main seated stand which is pretty decent and gives good views as I sat there for the 2nd half when the heavens opened. To the sides of the stand are two clubhouse buildings which had Soccer Saturday on as all good football grounds should! The rest of the ground is uncovered, hard standing which has been railed all the way round. A new car park is also welcome here (and a must to be honest) and there is room for expansion, however ambitious AFC Fylde have pledged to move into a new sports centre that the whole region can enjoy, so who knows how long Kellamergh Park has left. The visitors to the ground for this game were Stockport based Woodley Sports who were also a fairly young side having been founded in 1970 and after finishing 13th in the Unibond Div 1 North last season were hit by the news that as Stockport County had gone into administration, the £150,000 they were owed for payment for Liam Dickinson was not going to be paid and so a period of struggle looks likely while they recover from this. Woodley were in 17th place but as the bottom two in the Unibond North 1 were so gash this season, Woodley were under no danger of relegation and so two lower mid-table teams could have a real go at each other. 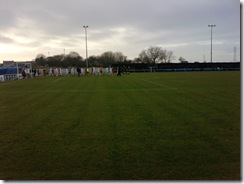 The game kicked off with both sides having a decent stab at each other as both sides wingers were easily beating the full backs and getting some good early crosses in. Although, the final ball again was lacking from both sides to create any meaningful chances until the 20th minute when a blistering move gave Fylde the lead. Pacey winger Michael Barnes skipped clear of the Woodley fullback and drove a low cross into the box which although missed Matt Walwyn, fell to Danny Penswick who lashed the ball home from the edge of the area to give Fylde the lead. The rest of the half was also fairly even with both sides pressing but neither creating any real chances of note until late in the 1st half, when another great ball in caused Woodley problems and Walwyn headed over when he really should have scored. 1-0 at half-time and a pretty decent game. I went off to buy my pie (after-all I was in deep Pie county) and move under cover for the 2nd half as it started to rain. 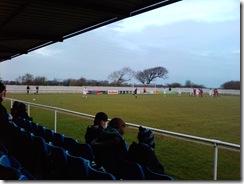 The 2nd half was more about Woodley missing chance after chance to grab a deserved equalizer as Rochdale loanee Dennis Sheriff twice got into good positions and Woodley were on both times extremely close to scoring and Fylde looked nervous with only a 1 goal lead. Woodley’s set pieces also caused problems as Fylde again struggled to get into the 2nd half, although once they began to work their counter attacks well they managed to tear Woodley apart and a 2nd goal came on 76 minutes when a rapid counter was finished off at the back post by Walwyn after some more great work by Barnes. Fylde could have had another as they zipped a long range shot oh so close to the far post as they pushed for an undeserved 3rd, but it was Woodley who got the final goal of the game, scored in the only minute of injury time announced when Sheriff’s cross looped straight in from the right wing as Woodley got their goal. Nowhere near enough time to create another chance as Fylde picked up the 3 points. 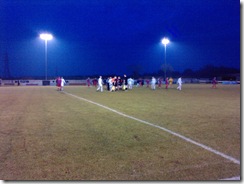 An entertaining day out then as it was good to get back to the Unibond and visit another nearby ground. Fylde could be a team rapidly on the rise soon, or it may well just be another pipe dream but whatever happens it will be interesting to see where they do eventually end up. Chorley should be my next Unibond port of call at the end of Feb (I’m organised!) and my next game is a surprise for me as I have an unexpected weekend in Edinburgh! No, it won’t be Easter Road.

- Atmosphere: 5/10 (for chants and shouts here and there) 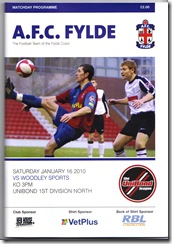