The next chapter in the FA Vase journey was to move slightly east from the opening round at Croydon to nearby Beckenham Town. They hosted fellow Kent League side Fisher FC who have an engrossing history and as I found out, a hardcore fan base still there. A place in the 1st Round proper awaited the winners and a dash across London’s various transports awaited me to get here. 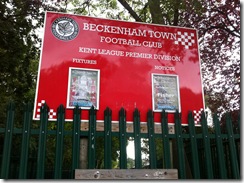 Beckenham is a town in the London Borough of Bromley, south east of Central London. Until the coming of the railway in 1857, Beckenham was a small village in almost completely rural surroundings. Although once a family of entrepreneurs began the building of villas here, its population soared from 2000 to 26,000 during 1850-1900 and throughout the rest of the century. The current population is nearly at 82,000. Today it is very much in London suburbia, although some of the grand houses of the early days remain giving the place a strange commuter town feel yet with the grandiose history. With many business links, Beckenham does host one interesting landmark in the Chinese Garage which dates back to 1928 and was built in the style of a Japanese pagoda. Strangely, the building now is used as a Peugeot Car dealership (a French company) and is a listed building. 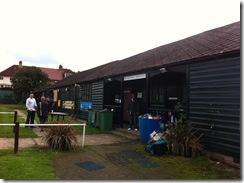 The town’s football side play in the Eden Park area at the imaginatively named Eden Park Avenue as it’s on a road called… They moved into the ground in July 1980 as they obtained a 25 year lease from The London Borough of Bromley (and presumably something similar was signed in 2005) and have made it their home ever since. The ground is actually one I really like with a large style pavilion (pic above) at the top end of the ground where the main entrance is located. Here houses the clubhouse and changing rooms and the style of the pavilion fits well with the leafy suburbia that Eden Park Avenue its situated in. The rest of the ground is ok with 4 separate areas of cover dotted around the pitch as well as a small main stand right in the middle. It is a smashing little ground that maintains the features of a Level 9 club as well as the surroundings its based in. 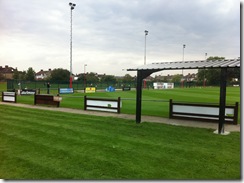 The club in it’s current state were only founded in 1971 as the grew out of an amateur side called Stanhope Rovers and as the main side in Beckenham, they were re-incorporated into it’s current name. (Another club called Beckenham Town had gone bust in 1969). They have played in the Kent League since 1982 and have always been a top flight side in the league, although they are normally floating around midtable (ground should be able to make the step up to Level 8 as far as I could see) they did lead the league right up until the last day of the season in 2005/06 before being pipped by Maidstone United to the title. Their furthest run in the FA Vase came way back in 1980/81 when they reached the 4th Round, although they had been banned from FA competitions in 2004 when they first were thrown out of the FA Vase for fielding an unregistered player before the FA were not happy with their appeal and banned them for 5 years (and the FA Cup for 6). Their first season back in the Vase was last season when they reached the 3rd Round before crashing out to Kings Lynn Town. Their opponents for this tie had a more turbulent history as they had only been reincarnated just 2 years ago. Fisher Athletic were playing in the Conference South in 2009 before their massive debts caught up with them and they were liquidated at the High Court. They had also left their Surrey Docks Stadium (it still stands, pictures of it’s sad current state can be found here on Mishi’s excellent blog) In May 2009, club representatives decided to take the Fisher name on becoming the new Fisher FC and continued to play at Dulwich Hamlet’s Champion Hill ground while “dropping” down to the Kent League, where they still play today. Last season they finished bottom of the KL but have made a much better start this time out and were going into this game in 4th place while Beckenham were down in 11th and 6 points down on Fisher (but with 2 games in hand), tough to call then! 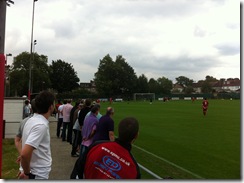 The first thing I noticed at KO was Fisher’s hardy bunch of fans who were singing from the off and one had even brought a flag. It was nice to see some real passion at non-league and good to see Fisher still had some hardcore fan base with them. They nearly had something to shout about early on when they went on their first attack but just 4 minutes in they were a goal down. A Beckenham corner came in and Jason Rose planted his header past Danny Firkins. Simple as you like. Fisher responded well and should have equalized a few moments later when Fisher’s midfield dynamo Jamie Turner sent Danny Hunt through on goal but the ball just got away from him at the vital time. That being said, Fisher did equalize on 14 minutes when Turner ran at the Beckenham defence who melted away until he was floored in the box. Penalty. And Turner himself made no mistake to make it 1-1. Fisher now should have held firm before pushing on as they did look good, yet 4 minutes later they were 2-1 down. A cross from the left was missed by a defender and Nick Curren’s low diving header nestled into the bottom corner. Both sides went for it now as a 3rd goal may end the game for Fisher but on 37 minutes home goalie Nick Blue made an outstanding save from a Hunt volley which he tipped onto the bar. At HT it was 2-1, and the Fisher fans were still in good voice. Home fans were, not. 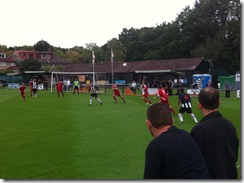 For the 2nd half as I walked around the ground to get some different pictures, I had the delight of standing next to the Fisher group who were still singing and getting behind their lads. They also made the running for the beginning of the half with Blue having to be on his toes to keep the away side out. Yet as most times when I write in my notes, “X doing well, pushing for equalizer”, they go and concede. Referee G.Collins had a reasonable game up until this point yet when Beckenham won a corner on 57 minutes, the ball came in and was cleared. Penalty. Nobody appealed for it and even the Beckenham players looked bemused as to its award. Not that Jack Hobbs cared, he easily scored his penalty and Fisher were incensed (and also 3-1 down). Adam Wadmore’s goal on 65 minutes ended the game as a contest, a smart finish from a low cross which he diverted in. Into his own net. At this point the Fisher fans’ gallows humour came out as it was clear their FA Vase run was ending at Eden Park Avenue this season. Beckenham still had time to add another when they won another penalty (this time the whole ground could see it) as the guilty party had clearly never listened to Ray Wilkins “stay on your feet!” mantra. Hobbs scored that one to make it 5-1 and Fisher even had time to have Frankie Warren sent off in injury time for a stupid lunge to pick up his 2nd yellow card. Beckenham were through to R1. 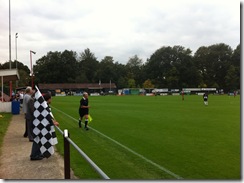 This felt like the least 5-1 game I have ever seen (if that made sense!) as Fisher had many chances to add to their tally whereas Beckenham seemed to score with every chance they had. I do hope one day Fisher can get back to a ground of their own, whether that be the Surrey Quays Stadium or a completely new build and if that does happen, I will certainly pop in. As for Beckenham, they have a really nice ground, good friendly club from the officials I met and spoke to, although you do feel if they came up against a team half decent, their defence would be torn to shreds. They now meet Sussex County League side Three Bridges away in the 1st Round (sadly I won’t be there) which has all the makings to be an interesting game. The FA Vase, you can’t beat it. 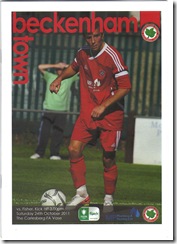