Inadvertently, it was midway through the 2nd month of 2011 and I still hadn’t seen a league game this year. Cup fever had well and truly hit and so I decided to get back to the league campaign and take in a club who I had seen only 2 months ago in a, cup game. That day Exmouth Town had been absolutely slaughtered by Level 12 side BOCA Seniors in the Devon FA Premier Cup by 7 goals to 1 and I asked the question, how bad are Exmouth Town? Considering they were at home, I took the journey down to the Jurassic Coast to find out. 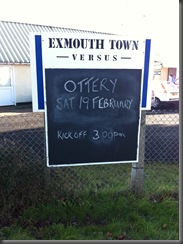 Exmouth is a seaside resort in East Devon, situated on the mouth of the River Exe. (Imaginative name then eh?) Exmouth can date itself back to Roman times most likely as Byzantine coins dating back to around 500AD were found on the beach in 1970. However the town has only been recently known as Exmouth (probably pre-1800s) as an area of land called Pratteshide which over time became what the place is known as today. The town only really began to establish itself during the 18th Century as tourists could not visit France due to the unrest there would visit Exmouth for the views and medicinal salt waters which were then so fashionable. Once the railway line was built into Exmouth, high class tourism was replaced by mass tourism as people flocked to Exmouth. Today, the town is still a popular with tourists but is also a high commuter based town thanks to good rood links and the Avocet Rail Line from Exmouth to Exeter Central and St Davids. 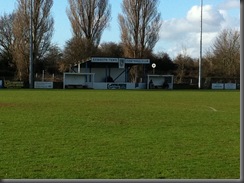 A short walk from Exmouth rail station is Southern Road, the home of Exmouth Town and it is a smart looking and well built up ground for Level 11. With a covered stand behind the dugouts (picture above) and a seating stand on the other side of the pitch with the ground (picture below), hardstanding and railed around, this is a decent ground. The main reason for that though is Exmouth Town were a Western League side not too long ago. They were even in the Western Premier at the start of the 2005/06 season before they resigned half way through and had their record expunged. Now down in the SWP Division 1 East, the heady heights of Level 9 seems miles away as last season they finished a disappointing 8th and were going into this game 9th (out of 16) and a massive 16 points behind leaders Liverton Town. Should Exmouth win this league, they should be accepted no problem into the SWP Premier given the ground at Southern Road has good facilities and has floodlights. Those days seem a long way away though… 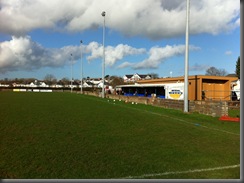 For their opponents in this game, their Western League days seem an eternity ago. I am always surprised to hear of tiny, maybe even obscure SWP teams who have had spells in the Western League and higher up the Pyramid. Ottery St Mary are one of these sides. Hailing from a small town just outside Exeter, the Otters were up in the Western League (albeit in Division 1) last in 1993/94 before finishing bottom and joining the Devon County League and the subsequent merging into the SWPL. A promotion challenge for them seems a tiny pipe dream though as after finishing 2nd bottom last season (only 1 point ahead of Bickleigh who were playing their first ever season at this level) they were down in 12th, 3 points behind Exmouth but having played 2 games more. They also had the worst defence in the league having conceded 55 goals, 3 goals more than bottom side Axminster Town – who only have 9 points all season! 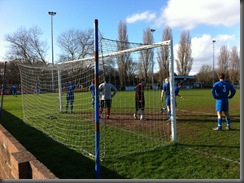 As the game kicked off, Exmouth showed why Ottery had let in so many as their defence parted like the Seas with Moses and the Seasiders created some good early chances. Otters goalie Neil Sargeant kept the away side in the game as he made some great saves. Exmouth also had the ball in the net (or very nearly – it was down the other side of pitch) but the chance was ruled out for offside. It was as if this was a wake up call for the Otters as they came smashing right back into the game and should have taken the lead on 11 minutes when a free header in the 6 yard box was amazingly cleared off the line, just by a defender. There was no stopping the Otters though and they took the lead on 17 minutes when they won a free kick just outside the area. Lance Easton strode up and curled the ball towards goal and all it needed was someone to get a touch. In the end nobody did and the ball curled straight in over Adrian Pullin who IMO, was partly a fault for that going straight in. Ottery St Mary became Spain-like in their red kit and attacking force as they begun to pick Exmouth off at will. As well as Pullin making up for his error by making some top saves to keep Exmouth in the game, the Otters struck the woodwork twice. Firstly from a deflected cross that could have went anywhere but bounced onto the bar and away to safety and then on 40 minutes through a fantastic passing move that found an Otters striker through on goal on the left side and his curling, first time shot cracked off the far post and was again cleared to safety. You would have thought Exmouth would just be delighted to be 0-1 down at HT, but amazingly they went and equalized on 43 minutes when a cross on the left from David O’Connor was hooked in (the ball seemed to be in the air for ages!) by Jamie Moore. Unbelievably it was 1-1 at HT! 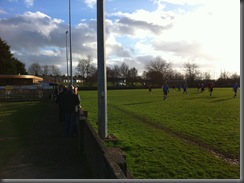 Otters started the 2nd half like the first as they forced Pullin into another top save to keep the scores level and then a shot from outside the area beat Pullin but rolled onto the post and away to safety as the Otters had hit the woodwork for the 3rd time in this game. You wondered if Ottery St Mary would regret all the chances they had failed to convert and lo and behold a double salvo in 8 minutes from Exmouth all but finished the game off. Firstly Dan Plater picked the ball up and took on a couple of weak challenges before unleashing a fantastic shot outside the area into the top corner. Boom. Have that. One of the best goals I had seen this season. Ottery were clearly reeling from this and conceded another one after a free kick found Chris Watts all alone in the box and he easily converted. By this time, the Otters had lost the plot in their shape and tactics and were beginning to lose some discipline as some tasty (and late) challenges began to fly in. It didn’t help that the Otters manager, Dane Bunney could only be described as “angry” and screamed at his players, even when they were playing well. I don’t know about the 11 on the pitch for Ottery, but if I were one of them I would have lost all motivation from him and would have been sick of his screaming. Maybe its just me. Dave O’Connor added a 4th late on with a turn and shot to give a scoreline that looked impossible at half-time. 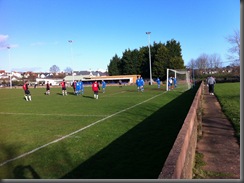 How bad are Exmouth Town? Well not that bad actually. The 1-7 drubbing I saw was clearly an off day. They also had 9 players missing for this game (according to conversations I overheard) so there is the foundations for a decent team there for Exmouth. A top half finish should be in order for the team as they try and haul themselves back up the Pyramid. As for Ottery, it was really clear why they have the worst defence in the league (SWP 1 East) as for all their pressure, the goals they let in were nothing special (except the wonder shot). Those Western League days seem Millenniums ago. This was a good game with some good attacking play and played (for the majority) in good spirits. Another SWPL team I’d urge you to visit! 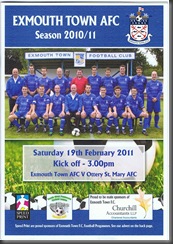