The Wembley arches are now really in sight for the 4 clubs remaining in the FA Vase. Whatever the outcome was to be of these two semi-finals, Herne Bay, West Auckland Town, Dunston UTS and Staveley Miners Welfare have all done exceptionally well to get here and see off some top teams in the earlier rounds. My road was now taking me up to the North-East as the Miner boys from Staveley now had to face Northern League Dunston UTS, and as I had missed the last couple of rounds, I went on probably my biggest journey ever for a single football match. Just the 284 miles from my house to the UTS Stadium… 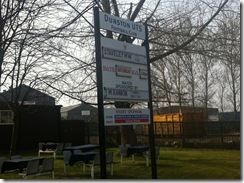 Dunston was originally an independent village on the south bank of the River Tyne but has now been absorbed into the Metropolitan Borough of Gateshead and much of Dunston now forms part of the inner Gateshead regeneration area. To the west of Dunston is the site of Dunston Power Station, now demolished and the site is now home to the MetroCentre, which was the largest shopping and leisure centre in Europe before the Stratford Westfield complex was opened in 2011. Another Dunston landmark is the Derwent Tower, commonly known as the "Dunston Rocket", a tower block that was once the highest in Gateshead, and was designed by the Owen Luder Partnership and completed in 1973. Dunston is particularly known for its wooden staithes, first opened in 1893 as a structure for loading coal from the North Durham coalfield onto ships. In the 1920s 140,000 tons of coal per week were loaded from the staithes, and they continued to be used until the 1970s. They were finally closed and partially dismantled in 1980. The staithes were restored and reopened for the Gateshead Garden Festival in 1990, following similar events around the country. Today, the staithes are reputed to be the largest wooden structure in Europe, and are protected as a Listed Building and a Scheduled Ancient Monument. 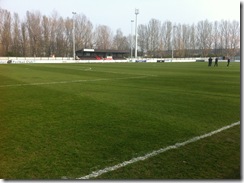 Dunston UTS have had a few name changes over the years since their formation in 1975. Formed as Whickham Sports they played on a public park in the Northern Alliance League picking up a few league titles and league cup wins before joining the Northern Combination League in 1980. After more success in this league, they decided to move to a base nearer the home ground and so moved to Dunston Mechanics Social Club and the team became known as Dunston Mechanics F.C. At this stage an approach was made to the Federation Brewery for sponsorship to assist in the progress of the club. When they kindly agreed to become the clubs main sponsors, the club name was changed to Dunston Federation Brewery F.C in 1987. A move to the Wearside League (despite being less than a mile away from the Tyne) before they joined the Northern League in 1991. Since their time in the NL, they have won it twice as well as winning the Northern League Cup five times. They were sponsored by UTS Ltd in June 2009 and so changed their name accordingly to Dunston UTS as they are known today. This was their first time in the FA Vase Semi-Finals after losing last season in the Quarters to fellow NL side Whitley Bay. 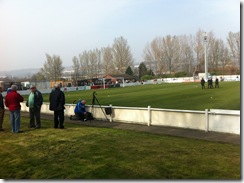 The UTS Stadium is a smart and open ground which was bathed in sunshine for this game. The main seated stand is named after their most famous son, Paul Gascoigne (although he apparently didn’t pay for the stand) while opposite is a larger standing area which reminded me slightly of the one at Blyth’s Croft Park. The rest of the ground is hard standing which can be seen as fairly basic, but it easily handled the sub 1000 crowd that had came for this game. Staveley had easily seen off St Ives Town in the previous round to get to this stage for the 1st time too and were going well in the league, being towards the top in the Northern Counties East League. Dunston were going into this game in 5th position with 5 games in hand over leaders Sunderland RCA and had a reasonable Vase run this season by seeing off Blackwell Miners Welfare (12-1!), Parkgate, Wisbech Town, Bethnal Green United and Peterborough North Star. A tough one to call… 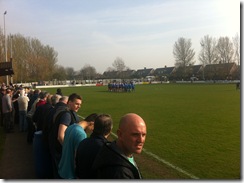 The game kicked off with Staveley MW clearly having some pace up front which did cause Dunston a couple of problems but nothing that the home goalie Liam Connell couldn’t handle. Connell at one point did cause himself some trouble when his goal kick went straight to SMW’s Jamie Smith, but his first time shot trickled wide. After another couple of half chances, Staveley’s good work going forward seemed to disappear after Andrew Fox was taken out on the touchline with a hard, but fair challenge. This caused the SMW boys to kick off and absolutely berate the referee with some shocking language. The ref took it, which did encouaged Staveley to continue this for the rest of the game when some yellow cards would have ended that then. With Staveley basically done as an attacking force, the rest of the half was poor, played on a rock hard pitch that was doing neither side good. 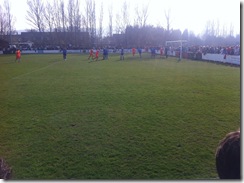 Dunston needed to play a lot better in the 2nd half as the first 45 minutes had passed them by and an early free kick which only just sailed past Ian Deakin’s goal after the ball had missed everyone was a good start. Staveley were only now beginning to get the ball forward on a few occasions but normally lost the ball instantly and probably had a moan at the referee too. Dunston chances started to come more frequently as Terence Galbraith had a low driven shot well saved by Deakin. The best chance of the game came when Galbraith hammered a free kick off the bar with Deakin well beaten. When that bar rattled, I’ll be honest, I thought my fine 0-0 record would be coming to an end, but with 12 minutes to go, Dunston finally made a breakthrough. A long free kick from Connell found a Dunston winger on the right who rolled the ball into Andrew Bulford in the area. He turned brilliantly and fired a shot in off the post to send most of the 900+ crowd into raptures and we even had a streaker for good measure too. Staveley now had to defend a 1-0 defeat as Dunston bombed forward in search of a 2nd, but that was it. A 1-0 win to take to Derbyshire and everyone knew this tie wasn’t finished yet. 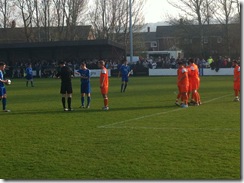 This was an enjoyable, but tiring day as a 568 mile round trip took its toll on the way back home. A long kip. The game wasn’t very good in all honesty as both sides knew they could play a lot better. I was more disappointed with Staveley as they clearly could have caused Dunston problems but instead decided to spend around 80 minutes arguing with the referee. It was great to meet up with Ian Cusack, as well as meeting Shaun Smith (creator of the 100 Football Grounds Club) and Adrian Ragsdale (follow on Twitter here) as I watched the game with all 3. Dunston really did well for their big day, as everyone involved with the club were a delight to talk to and I hope they can carry on their good form with some key games coming up for them. There was of course, the 2nd leg still to come…

- Referee: Andrew Madley – 6/10 (could have stamped his authority more) 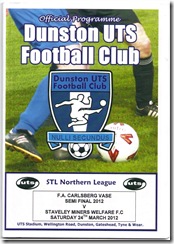