Apparently people still do Christmas shopping at actual shops. Where you have to deal with hordes of people all wanting to buy some cheap tat like a Michael Buble album to give to the one they love/their relation/one they want to shag. Other people, smarter people, avoid all this by doing their shopping online (or do none at all) and thus avoid this problem leaving them to do what they want peacefully. According to several clubs, the Saturday before Christmas is the toughest for them to get people in so they offer excellent prices for floaters like me who don’t need/want to shop to pop along for the day. The list was endless but in the end I decided upon top of the league Charlton Athletic and trip down The Valley. 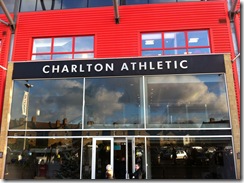 Charlton is a district of south London and part of the London Borough of Greenwich. Charlton next Woolwich was an ancient parish in the county of Kent, which became part of the metropolitan area of London in 1855. Charlton is recoded in the 1086 Domesday Book as Cerletone. It is formed from Old English 'ceorl' and 'tūn' and means 'farmstead of the freemen or peasants'. It is a common English placename and the parish was also known as Charlton next Woolwich to distinguish it from Charlton by Dover. During the 19th century the riverside portion of the area became known as New Charlton. The flat land adjoining the Thames at New Charlton has been a significant industrial area since Victorian times. A notable establishment was the Siemens Brothers Telegraph Works opened in 1863, which manufactured two new transatlantic cables in the 1880s and contributed to PLUTO in World War 2. (Pipe Lines Under The Ocean) 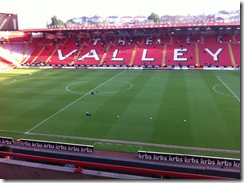 Despite currently languishing in League 1, Charlton Athletic have spent the majority of their history in the top leagues, although rarely competing for the honours at the end of the season. They joined the Football League in 1921, coming into the Third Division South. After looking like becoming a bit of a yo-yo club in the early 30’s, their best spell was between 1934-37 when they achieved a double promotion to Division 1 and then came 2nd in their first season there. (Their highest ever finish) An FA Cup win in 1947 remains their only major trophy and they floated around the 2nd and 3rd tiers before joining the Premier League elite in 1998, albeit for one season that time, before rejoining and becoming safe members under Alan Curbishley from 2000-2007. After dropping back down again in 07, Alan Pardew and then Phil Parkinson led them to a surprise relegation in 2008-09 to League 1 where they still remain now. 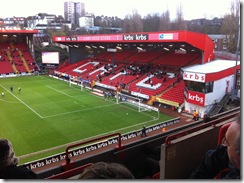 Charlton’s home The Valley has been their home since 1919 apart from the wilderness years from 1985-1992. An impressive ground now with 4 towering stands that provide excellent views of the pitch too. However, The Valley has not always been a decent venue to watch football. The old East Bank was the largest stand in English football but with Charlton being out of the top flight for so long, renovation never came. When the club was bought out by the Charlton supporters club, they could not afford the required safety improvements and so they were forced to ground share away from The Valley for 7 years at Crystal Palace and then West Ham. The “new” Valley opened in 1992 and since then, 3 stands have all been rebuilt, with just the South Stand (away fans) to go. A 3/4 bowl of red, this is a decent ground and one that should be hosting football higher than League 1. 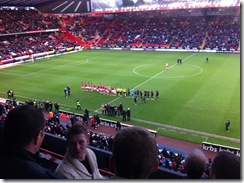 Charlton though seem to be going places with rookie boss Chris Powell in charge of them. They were going into this game top of the League and looking good to return back to The Championship under the guidance of an ex Charlton player. The away side were also managed by a former player who had just retired, marmite player Paul Dickov who was also cutting his managerial teeth with the Lancashire side. Despite finishing in a lowly 17th last season, the performances of the club have improved since the start of Dickov’s reign and going into this game in 11th and closer to the play-offs than the relegation spots suggests Oldham could be going places with Dickov, depsite a current lowly 28% win rate. 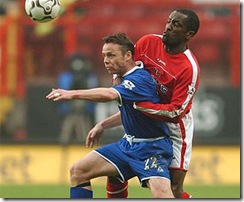 (Dickov and Powell go head to head as players)

I shouldn’t have been surprised as before the game I kept reading that Dickov’s Oldham played a certain type of game much in the style of how he played. Hustling, harrying and physical, Oldham set their game plan out early on. Sadly, that game plan consisted of coming here for a 0-0 and showing no positive attacking play at all. I noted that only 22 minutes in, away goalie Alex Cisak was timewasting over a goal kick. Not a good sign. It was made worse by the fact that Charlton could not break down this anti-football tactic and so the 1st 45 minutes were some of the poorest I’d seen all season. Danny Green was occasionally a menace down the right as some crosses he swung in did cause the Oldham back-line some problems. And it was Green who had the best chance of the half when Kermorgant’s pass sent him through but he fired wide when he should have done better. Amazingly, just before HT, Oldham actually bothered to mount an attack and almost opened the scoring when Taylor hit a long range effort that was well tipped over by Ben Hamer. HT it was 0-0 and desperately poor. Luckily some work colleagues had also foolishly came along to this and so we could suffer together. Dreadful. 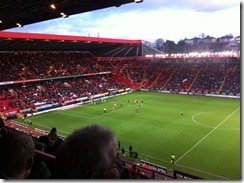 Charlton did look slightly brighter (although considering how average they were in the 1st half, that wasn’t hard) at the start of the half as Bradley Wright-Philips fired a shot into the side netting before Green again broke away from the Oldham defence and sent BWP through but Cisak reacted well and made the save. Charlton though were having a period of good possession and pressure but I had already presumed that this would finish 0-0 and my excellent run of games without a goalless draw would be over. Much to my surprise, Charlton took a deserved lead (they were the only ones attacking) on 60 minutes. The ball was moved across to the right where Matt Taylor was there and crossed the ball in. Darel Russell got ahead of the defender to headed the ball into an empty net as Alex Cisak had gone for a wander to try and claim the ball. This made the game interesting, Oldham would actually have to attack and lo and behold Cisak’s goalkicks started taking 5 seconds rather than 30 before the goal went in. Charlton strangely began to sit back and let Oldham actually show their attacking force as chances began to be created. Firstly Matt Smith hooked a shot from outside the area wide before ex Hibs bastard Filipe Morais got in behind the Charlton defence to cut the ball back where Shefki Kuqi’s shot was well blocked by Taylor. That cutback idea move appealed to Oldham though and so repeated it a few minutes later when Chris Taylor got in behind the defence to pull it back to Morais who slammed his shot into the bottom corner to send the 421 Oldham fans into delirium behind the goal. Oldham actually looked half decent up front so why the hell did they wait 75 minutes before actually showing us?! Charlton huffed in the final 5 minutes but they couldn’t create anything else as they lost 2 points to anti-football. 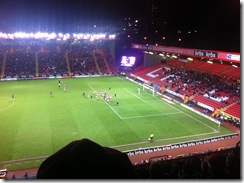 This was not a good game. If an Oldham fan reads this, do you play that negatively every week? In fairness to Dickov, Oldham came for a point and left with one so in his eyes it was mission accomplished. Charlton, for a top of the table side, weren’t that much better which does suggest the standard of League 1 is shocking this year. The Addicks followed this result up with a late 3-2 win at Yeovil, while Oldham slumped to a 1-0 home defeat to Hartlepool United. I’m glad to have got to The Valley as its a lovely ground but Charlton need to pull themselves out of this league ASAP before they start getting dragged down by mediocrity. Thankfully this was only £10, I couldn’t be paying more every week to watch shite.

- Referee: Lee Collins – 2/10 (no backbone allowed Oldham to get away with it) 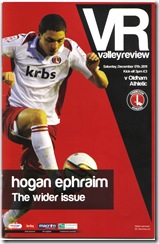 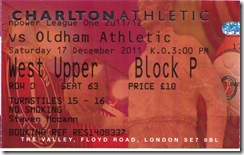