I had wanted to do a few posts about this years SW Challenge Cup, however as my laptop wasn’t playing ball, this single post will have to do! 13 teams had entered this years tournament with big Premier teams Blackpool and Kilmarnock being the star names. As fate would have it, both of them were placed together in 4 team Group A along with Accrington Stanley and Bideford. Killie had scraped past Zamaretto side Bideford 7-1 the night before and if ‘Pool could beat Accrington in this game, they would set up a winner takes all game at the end of the week between each other. 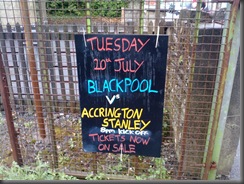 Nothing has changed in Torrington since July 2009 except that a new Thai Restaurant has opened (woo hoo!) in the town and the Cavalier's Castle is finished and they will be setting it alight on August 28th. At Vicarage Field, with Torrington still languishing in the North Devon League (Level 12), improvements aren’t needed, but the ground has been given a lick of paint for this tournament and it looks very decent. Shame its hosting the football that it is, but for this match a Premier League side graced the Vicarage Field turf in the form of Blackpool. 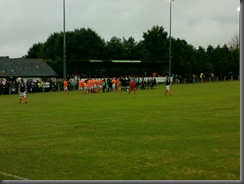 Having surprised everyone (including me) last season by winning promotion through the play-offs after beating Cardiff 3-2, ‘Pool would be playing their first season of top flight football since 1970/71. Although near certainties to go straight back down (prove me wrong) they’ll certainly give it a good go and earn a fair amount in the process. They had taken part in the SW Challenge Cup last season and went out in the Group Stage after beating local side Barnstaple Town, they then lost to Rushden & Diamonds on penalties to go home early and were looking to make amends this time out. Fellow Lancashire side Accrington Stanley were taking part in their 1st SW Challenge Cup after a decent 15th place last season in League 2, Accrington now face the challenge of kicking on after spending 4 seasons back in the FL. Boss John Coleman seems to be collecting together a decent team and so this game looked to be a cracker and an excellent attendance of 617 (crowd record?) also made the atmosphere good too. A lot of people may not have expected such a quick start but Blackpool twice got behind the Accrington defence in the first 4 minutes. The second time Keith Southern had broken clear after a piercing ball from Charlie Adam and Southern unselfishly passed the ball across to Brett Ormerod to easily score. If you expected a capitulation from the League 2 side then you are mistaken as Stanley came right back at Blackpool and grabbed a deserved equalizer on 12 minutes when Accrington won a free kick around 30 yards out and Jimmy Ryan curled a fantastic free kick straight into the top corner and we had a game on and an early early candidate for goal of the season. In fact it was the League 2 side that kept going and began creating a lot more than their Premiership counterparts and could have had the lead towards the end of the half but McConville just shot wide. We also had some good old fashion handbags right on half time with most of the players getting involved but no cards were shown, but the crowd enjoyed it. 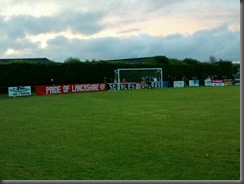 Blackpool had started well in the 1st half and continued that at the beginning of the 2nd as Jason Euell had nearly scored from an Ian Dunbavin mistake before a great cross found Keith Southern who powered his header into the net to put ‘Pool back in front. Yet the 2nd half followed exactly the same pattern as Stanley got right back into it and should have been level 9 minutes later when another Jimmy Ryan free kick crashed off the underside of the bar and scrambled away by the Tangerine defence. Euell could have finished the game off on 65 minutes but his one on one effort was saved by Dunbavin as ‘Pool had a rare chance. Stanley though kept pushing away for an equalizer and another Stanley free-kick was spilled by ‘Pool goalie Paul Rachubka and the whole ground held their breath as the ball slowly rolled, just wide for a corner. The final chance of the game nearly saw a wonder goal when Phil Edwards flicked the ball up and volleyed just over the bar as the match ended with a ‘Pool win. 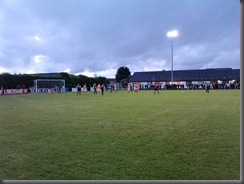 So Blackpool went onto face Kilmarnock in the Group A decider and squeezed through on penalties while Accrington beat Bideford 5-2 in what sounded an entertaining match. Blackpool got to the final after beating Leyton Orient and should have faced Shrewsbury Town who beat Havant and Waterlooville but the Shropshire side pulled out with injuries and so Havant stepped in but ‘Pool won the Cup with a 3-2 win. Accrington Stanley should be more than fine this season in League 2 on this showing and will go into confidence for their opening game against Aldershot (which is currently 0-0 as I write this). God knows who ‘Pool will fare. It could be a long season. 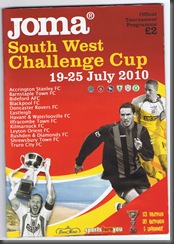 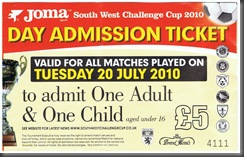