Since picking “the Wildcats” out of a hat for my rugby league team, I haven’t actually seen them play in a full game live. Once my move to London was sorted, I awaited the Super League XVII fixtures being released to see when my boys would get London Broncos away. (Possibly the only fan who actually looked for this fixture) March 31st it was and after seeing a Youth football match in the morning, it was now time for the main event. I was very keen. 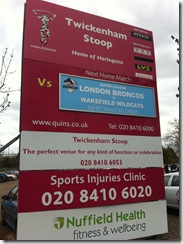 The Broncos have had a varied history since their founding in 1980 as Fulham (when they were an attachment to the football club) with the primary intention of creating another income stream for the football club. The Rugby Football League (RFL), keen to try to expand the sport beyond its traditional northern heartland, accepted the new club at once. Around 10k turned up for their first game at Craven Cottage when they beat Wigan 24-5. They went on to be promoted in their first season before they became a yo-yo club after Fulham pulled out their financial backing. The club then played at Crystal Palace and The Polytechnic Stadium in Chiswick before playing at other venues such as Wealdstone, Hendon and Chelsea. In 1991, London Crusaders were born before changing their name yet again to the London Broncos in 1994. After 11 years in which this time they came runners up in Super League (1997) and the Challenge Cup (1999), they changed their name again to Harlequins RL and moved to the Twickenham Stoop. 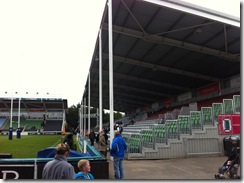 During this time as HRL, they finished 7th in their first season and then Brian McDermott presided over four seasons of Harlequins RL decline from 2007 to 2010, with the club dropping to 9th in both 2007 and 2008 and then falling to 11th in 2009 before dropping to 13th in his last season, 2010. In 2010, with a couple of games to go the Catalans in last position played Harlequins whom were next to last in what was effectively a 'wooden spoon decider', a win meant that Quins avoided the bottom as they did in 2011 due to their excellent start to the season when they picked out 3 wins from 3. Then in November 2011, they reverted back to their name of London Broncos with a new logo and new kit while still continuing to play at the Stoop. The Twickenham Stoop was built in 1963 and still looks an excellent ground to see a game at. Four stands that may look similar, but provide decent views to see the game. The LV Stand seems to be where the main Broncos fans sit, while the Wakefield lot were positioned in the North Stand. Annoyingly there are some poles that do block some of the view but getting there early does have some good points. One other point about The Stoop, the catering, “Devine” might well be Devine, but at prices around £6 for chips, I think Heaven will have to wait. This season Wakefield were actually tipped by BBC Rugby League to finish in a play-off place (albeit 8th) and after an opening day win over Widnes, they proceeded to plod to defeats against Hull KR, Bradford, Hull FC and Huddersfield before they were a 7th tackle try away from deservedly beating Warrington before coming into this game with a great win over the Catalan Dragons. London Broncos had unsurprisingly struggled this season with defeats to St Helens, Warrington, Hull FC, Huddersfield, Salford, Wigan and Widnes with their single win over Castleford, leaving them rooted to the bottom going into this crunch tie. 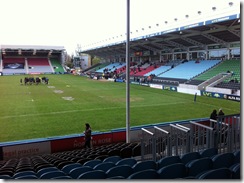 When the game kicked off, Broncos looked the team that were most up for it and began putting the Wildcats defence under a fair bit of early pressure. That early pressure was rewarded on 4 minutes when a high kick on the 5th tackle from Craig Gower caused all sorts of problems as Wakefield fumbled the ball which allowed Tony Clubb to score an early try. Bugger. It got worse too when Steve Ganson awarded a ridiculous penalty to allow Michael Witt to score between the posts and we were already 8-0 down in 8 minutes. It got a lot worse as again Wakefield fumbled the ball and lost possession to allow Dan Sarginson some space on the left. He showed some brilliant pace to leave Isaac John looking like a fool and he was in for a converted try, 14-0. While Wakefield did get over this shock and begin to have some of the ball, the yards were not being made and you just felt that if Broncos got a good chance, they would take it. On 31 minutes, they did, as another high ball was not caught and Kieran Dixon had an easy try. The 4th try for the Broncos on 35 minutes was easily the worst. Broncos lumped a kick straight down the centre of the field which seemed to open our defence up like the seas and Michael Robinson caught and ran through to put the home side 24-0 up at the break. 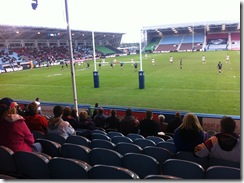 Let’s be honest, the game was now lost but at least Wakefield should tried to have won this half and restore some pride. Imagine our pride then on 44 minutes when another high Gower kick was spilled by Ben Cockayne to allow Robinson in for his 2nd try of the game and it was now 28-0. It should have been a lot worse, Witt clearly isn’t a very good dead ball kicker and he had missed his last two kicks for extras. Wakefield again had more of the ball this half and even completed their first set of the game (I timed it at around 60 minutes) but could not break down a fairly tough Broncos defence. It was becoming fairly desperate now for us to score at least a point (just score a dropgoal!) so we didn’t get nilled at one of the worst teams in the league, yet Broncos easily defended their tryline and then scored another two tries on the counter. Firstly, a rapid break down the right led Jamie O'Callghan fed Liam Colbon to easily skip over the line and then on 75 minutes, Broncos scored the final points of the game which completely summed the game up. With Wakefield camped on the Broncos 20”, they lost the ball only God knows how and Luke Dorn sprinted from one end of the pitch to other to score Broncos’ 7th try and complete the game at an embarrassing 36-0. 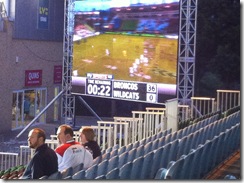 So I finally saw Wakefield in action but typically, after waiting so long for this game, it ended quite badly with a deserved hammering. It was even more frustrating considering the previous excellent performances against Catalans and Warrington. It hasn’t got better for Wakefield since this game with defeats to rivals Castleford (34-16) and Wigan (36-6) to leave us firmly rooted at the bottom of the table. (Thankfully, Broncos and Widnes seem as bad as us, for now) Broncos have reverted back to normal as well since this game with defeats to Catalans (36-18) and Leeds (52-10). Watching a game at The Stoop is an ok experience, even behind the sticks you can see a good view and with the game being on Sky, we could just watch the replays if we did miss anything. It’s a shame Broncos aren’t better supported, as rugby league does need to expand its borders, so hopefully Broncos and the London Skolars can increase their popularity so the capital can get more of the better side of rugby. I’ll be at the Wakefield v Broncos reverse game in June and you never know, we might score a point.

Photos from Broncos vs Wildcats 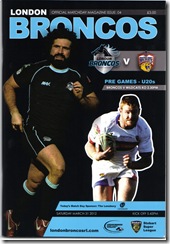 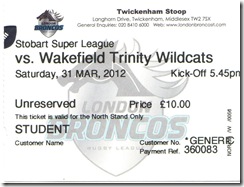