Although I would like to follow my “Road to Wembley” article all the way through to the final – lack of funds and geography (its a fair bit to get to Swansea!) meant that I would have to stay local. Luckily, a great FA Cup story was building up near me on the English Riviera as Torquay United were trying to get through to the 5th Round for the very first time. As I hadn’t been to Torquay Utd before, I popped along to take in the game. 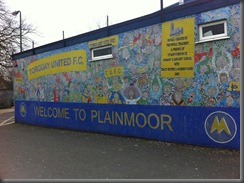 Torquay is a tourist resort town in South Devon and is part of the unitary authority area of Torbay. The economy of the town was originally based on fishing and agriculture but during the Victorian age Torquay became a fashionable seaside resort which the top lot (the “rar rars”) of Victorian Britain as the town’s fame spread. People such as Agatha Christie were known to reside there giving the town more fame and an Agatha Christie Mile is also available to walk for Christieites. Today, the town is to my eyes when I went, a forgotten seaside resort that is still decent enough but just not many people here. The growing problem of binge drinking (not helped by two JD Wetherspoons within about 100 metres of each other on the quayside) has been curbed due to a police presence and notable people from the area today include Miranda Hart, Peter Cook and Helen Chamberlain. 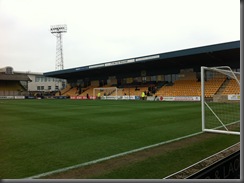 The town’s football team, Torquay United are going through a renascence after spending some time floating towards the bottom of League 2 and going through to the non-league trap door in 2007. Since then, under the management of Paul Buckle, they have progressed along nicely and were promoted back into League 2 in 2009 after a 2-0 Play-Off Final win over Cambridge Utd. After a comfortable 17th place finish last season, they were going into this Cup tie in 13th place on 33 points, a nice 7 point gap over Barnet in 23rd place and a 7 point gap to Gillingham in 7th. Therefore the next few weeks could define their season as would it be a play-off push or a battle against the drop? (Of course, they could have a non-2011 and float around in midtable for the rest of it). The current team were also on the verge of history trying to get into Round 5. This was their 4th FA Cup game of the season having previously dispatched of Mansfield Town, Walsall and Carlisle Utd (all 1-0 wins). With a big crowd and the potential for a lot of money to be made, this was a big day for Torquay. 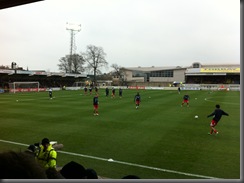 It was also a big day for Crawley, a club that thanks to one of the biggest scumbags in football was really on the up. They had already created history by reaching the 4th Round and unchartered territory. However, it is sort of the same way Hitler created history when his armies invaded unchartered territories during the Second World War. This is because Crawley are managed by their own mad dictator themselves in Steve Evans. A criminal, for forging accounts while at Boston United and then jumping ships to Crawley just as they were about to be relegated once the scam payments had been found out. (Boston were then promptly relegated twice to the Unibond Premier after his mess – they are just starting to recover) Evans is also a “passionate” manager after being sent off from the dugout time and time again and even was given a 10 game suspension for his misdemeanours. A Grade A Tosspot then. Despite him, I had been pre-warned about the rest of his team for being a team of scumbags, playing every trick in the book and others to get an unfair advantage. Despite this, I had given them a chance when I went. 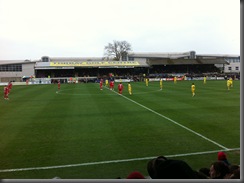 It also has to be noted that despite Crawley Town were only 2nd in the Blue Square Premier (2 points behind AFC Wimbledon, but with 4 games in hand) and looked good to be coming into the Football League for the first time next season, they are for all intents and purposes, a Football League club already. Backed by unknown investors, “Project Promotion” is fully underway. With a budget bigger than every side in League 2 and a fair amount in League 1 as well, Crawley have spent silly money such as £275,000 for York City’s Richard Brodie, £100,000 for Peterborough Utd’s Sergio Torres and £70,000 for Salisbury City’s Matt Tubbs. Unbelievable amounts of money to spending as a non-league club. As I write this, I listened to the Jeremy Vine show on BBC 2 which Vine states jokingly, “in football you learn not to ask questions!” (about the £50m Torres transfer) Surely with Crawley, who get an average attendance of around 1,500, you need to ask where is the money coming from? And will it be a matter of time before Crawley end up like Boston? (In the matter of fairness, the Conference officials have stated they found no problems with Crawley’s finances.) 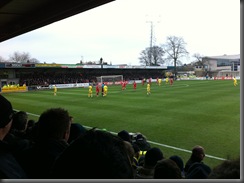 Torquay’s big day could not have gotten off to a worse start when due to crowd congestion (many people had to pay on the turnstiles, like myself) the game was delayed by 15 minutes. Then Crawley’s assistant manager Paul Raynor got into a heated argument with a groundsman over something towards the side of the pitch they were warming up on. (Raynor is always given a “warm welcome” to Torquay due to an incident when he played for PNE against them in 1994) The atmosphere that the 5000+ crowd had managed to build up before kick-off had all but evaporated by Crawley’s early tactics. For example, their goalie Michel Kuipers timewasted over a goalkick, in the 1st minute. After that moment the crowd knew what sort of game we were in for as Torquay’s bemusing 4-5-1 came up against Crawley’s anti-football. Despite having most of the ball early on, Crawley began to get back into it as Torquay’s lone striker in Elliot Benyon was having zero service put to him and nobody in their midfield was bothering to go and support him. As a Torquay fan near me said, “its like we’re the away team!” This game was plodding along to half-time when on 39 minutes, Torquay paid a heavy price for sitting so deep. As Bulman lofted a long ball forward, Torquay’s central defence parted like the sea and Tubbs ran through and finished over Scott Bevan to give the “non-leaguers” a 1-0 lead. It stayed that way till HT as Torquay needed to reshape and reorganise desperately. 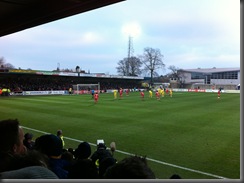 To my surprise, Torquay were unchanged for the start of the 2nd half as this played right into Crawley’s hands as they easily soaked up the pressure that Torquay were throwing at them. That being said, Torquay nearly snatched an unlikely equalizer when Chris Zebroski was sent down the right and Stephens was so close to meeting the cross and finding the net. Up until that point Zebroski’s only contribution to the game had been tripping over the ball in the 1st half. After that cross he was very quickly the centre of attention when he first gave a free kick away for a fair challenge on Dean Howell which the Crawley player made the most of. The Zeb was booked but when the free kick was planted in, he for reasons beyond everyone in the ground leaped to handball it and was promptly shown a 2nd yellow and Crawley had a penalty. Matt Tubbs had the chance to put Crawley 2 up and a man up but his penalty was guessed by Scott Bevan who made a fantastic save to keep it only at 1. Crawley though were given another chance from the spot only 6 minutes later when Jamie Cook burst into the area and went down quicker than a pornstar when Lee Mansell made minimal contact with him. Off the ball, Tubbs and Craig McAllister nearly came to blows when trying to decide who would take the penalty. In the end, McAllister won and dispatched his spot kick to the opposite side that Tubbs did. Too obvious. Bevan saw it and saved his 2nd of the game as Torquay gained a lot of heart from still being in this game. Crawley still continued to cheat, dive, timewaste and foul their way through this game as their plan to stifle and generally pee off Torquay was working. Finally, Crawley were sent down to 10 men on 82 minutes when Dean Howell was stupidly booked with Torquay’s Billy Kee after Kee had accidentally fouled a Crawley player going for a header and Howell took exception and started a brawl. Pablo Mills was also lucky to be on the pitch as the Crawley captain is a strong player, but up against someone with any pace whatsoever, he is caught out and can only hack them down to stop them going further. As Billy Kee found out. Torquay’s final chance of the game was a 25 yard volley from Kevin Nicholson which cracked the bar, but Torquay never created a golden opportunity and Crawley’s anti-football won the day and were into Round 5. 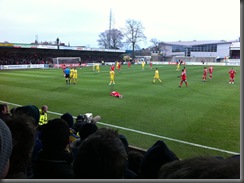 Crawley then were in dreamland as in Round 5 they were drawn away to Manchester United – unbelievable. Even an inevitable 5-0 win for Utd won’t dampen the Crawley players and fans who surely cannot be proud of their team’s antics? Crawley are the biggest bunch of scumbags I have seen, and with a financial model such as theres, surely in 5/6 years time, Crawley will crash and end up in the Southern League or lower, a la Boston. Project Promotion was continued on transfer deadline day was emphasised when Crawley signed Dunfermline’s Willie Gibson for an undisclosed fee. (They had a £120,000 bid rejected in the summer). Torquay on the other hand lost two of their best players on Deadline Day as Elliot Benyon went to Swindon and Nicky Wroe went to Shrewsbury with Jake Robinson coming the other way on loan. They then crashed to a 3-1 home defeat to lowly Hereford Utd as it looks like Torquay will be looking downwards rather than upwards for the rest of the season. A final note to all FL clubs, a new team will be joining you next season, shame they are utter scumbags.

Photos from Torquay vs Crawley 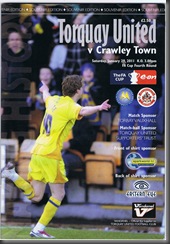