Programme: Free – A4 paper folded over

So, finally I’d get to Witheridge, at the 3rd attempt I would see a game at Edge Down Park. (I know its nothing special, but its now the principle) However, on Friday night, the great SWP League forum alerted me with this message:

“As the forecast for Saturday is better (can’t get much worse) and we are so short of fixtures all home clubs are asked to make every effort to get games on, hold inspections as late as possible bearing in mind where the away team is travelling from and ensure an appropriate referee does conduct any inspection necessary”

So, Witheridge looks likely to be on then I think as I head to bed, only to find out on Sat morn, that it was called off at 10:10am, one of the first games to go. Someone in Witheridge must dislike me. :| It was then Plan B as I was looking at Launceston’s home game against Dartmouth. Another fairly close ground that I had previously missed out on. When news came through that it was on, I was glad to avoid another Christmas debacle when ALL my plans were nailed by the weather, so I headed South for N.Cornwall for this SWP Premier game. 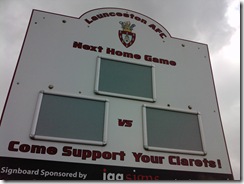 Launceston is a town and ancient borough which is situated just on the Cornwall side of the Cornish/Devon border, 2 miles away from the Devon side. Thus giving the town the name “Gateway to Cornwall”. The town is dominated by the Castle in the centre of town which was an old Norman motte which was possibly built as early as 1067 and became known as ‘Castle Terrible’ due to the amount of hangings that took place there. The castle is still there today, owned by English Heritage and hosts the “Castle Rock” music festival in the lower grounds of the castle every July. It is also a main market town for the local area (with Holsworthy being the other big town nearby I don’t blame the locals) yet the mass amounts of major supermarkets in the town is a strange one. I wasn’t complaining, Tesco ftw. There isn’t much else in this sleepy Cornish town to distinguish itself from other places, although just wait till you see what I have to write about Witheridge… 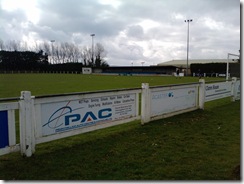 The drive down was straight forward (mainly because its a straight road, I had driven here before going to Saltash and I Google Street-viewed it) and on the way I passed Holsworthy’s Upcott Field, where their game had been called off against Wadebridge Town. Once arriving at Pennygillam (named after the Industrial Estate the ground is on I presume) there was an ample car park that I cruised right into, and then the gate was locked behind me, strange until I realised that I had parked in the players & officials car park and didn’t actually then have to pay as I was already in the ground. However wanting a proggie I bimbled over to cough up £4 and find that a full programme “could not be produced” for this game but a free sheet of A4 paper folded over was given so can’t moan too much. Pennygillam looks quite similar to Holsworthy’s ground with the car park behind one goal, clubhouse in the corner and one seated stand that runs down part of the pitch. The rest of the ground is uncovered and hard standing, but does have tall trees down the NE side of the pitch which does make it look quite scenic. Launceston FC have spent all of their time in the Southwest League which later became the Southwest Peninsula in 2007. They have only won the league once in that time, in season 1994/1995, but do seem to be moving forward, albeit slowly after making their FA Cup debut last season when they reached the Preliminary Round losing 2-0 to Paulton Rovers (who play 2 divisions higher). After finishing in 10th (out of 19) last season, they went into this game in a disappointing 14th (out of 19 after Clyst Rovers had pulled out the league in February) 3 points behind Dartmouth, but with 4 games in hand over them and a better goal difference. 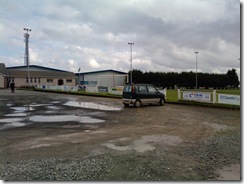 I had seen Dartmouth earlier this season when they went to Holsworthy and suffered a 1-2 defeat. That game put Holsworthy on 8 points and since then (the end of September), they have picked up just 2 more points in 6 months and look certain to be playing in Division 1 (East or West, who knows) next season. That did make me think how bad Dartmouth must have been that day (they were actually unlucky to lose) and made Launceston favourites for this game in my mind at least. However when the game kicked off, Launy did not get going at all, summed up in the 1st minute when their long ball from kick off went straight out for a throw in and Dartmouth counter-attacked and volleyed just over. If that didn’t wake Launceston up then on 6 minutes they were, as Dartmouth again counter-attacked down the right side and some good work in the middle through their #9 (a big Barry Conlon look-alike) worked the ball out to the left and the low cross was turned in, under the goalie’s legs by John Barrow to give the Darts a deserved early lead. Having claimed a seat on a bench right next to the near corner flag I had a good view as Launceston began to actually play and get back into the game and were just a final ball away from getting in a shot or when they won corners or free kicks on the edge of the area, they came to nothing. So when they won a corner on 37 minutes, not a lot was expected to happen. However a deep ball towards the back post caught the Dartmouth goalie out and Dominic Richardson was on hand to head the ball in for an unlikely equalizer. Dartmouth though hit back straight away as again, Launceston fell asleep defensively as they watched Dartmouth take a quick throw in on 43 minutes and play a long ball forward to Luke Brown who volleyed over Launceston keeper Paul Hider to give the Darts a 2-1 lead. Launceston though had 3 main chances to score before half-time as they had a shot cleared off the line, a header that missed when it looked easier to score and also should have had a penalty when the Dartmouth goalie barged a Launceston striker in the box when seeing the ball go out for a goal kick. At half-time this game wasn’t over by a long shot. 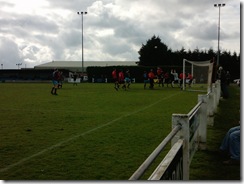 For the 2nd half I had moved round to the seated stand which had some tops views of the pitch and allowed me to take some decent photos as the glare of the Sun was taken out by the roof. Launceston went at Dartmouth as they searched an equalizer early on and nearly found it on 52 minutes when some more good build-up play saw Launceston volley over the bar. They did get the equalizer however 4 minutes later when some great work down the right by Sam Davey and his low cross was slammed in at the near post by Liam Tilley. A deserved equalizer for the Clarets. By this time, Launceston were well on top as Dartmouth just struggled to get going as they seemed to undo all their hard work done in the 1st half. Only one team were now going to score and they did to take the lead for the 1st time in the game on 76 minutes when a ball in from the left found Dom Richardson so poorly unmarked he had time to adjust his feet and guide his header into the bottom corner of the net. Launceston finished the game off with 2 minutes to go when a great run fed through Sam Davey and the lively winger got his goal when he controlled the ball in the area and placed it past the goalie to end the match. Launceston did score a 5th in injury time as Davey smashed the ball past the goalie but another Launceston player diverted it on the line and was thus offside. A recovery win for Launceston though and they went above Dartmouth in the table on this performance. 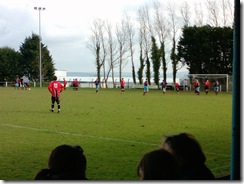 A good day out then in N.Cornwall as Launceston was finally visited after Withy fell to the weather. A decent ground with a cracking clubhouse means its another enjoyable experience in the SWP League. While the lack of a proper programme was disappointing, Launceston is fairly close by so I could re-visit to get a proggie some other time. I also found out that during Launceston’s last home game, they were 0-2 down to Bovey Tracey at half-time before scoring 6 unanswered 2nd half goals to bag a 6-2 win, so clearly only come for the 2nd half to Pennygillam if you want to see Launceston play well! This game also started the hectic Easter schedule I had planned, with the next game taking place on the Monday, 2 days later at Western League side Willand Rovers. Also, no coat needed again. Summer is nearly here.

Pictures from Launceston vs Dartmouth

- Programme: N/A – not a full programme, would be unfair to score 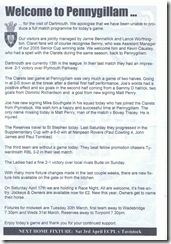