After seeing 3 professional games in a row it was time to start the new year with a back to basics and the non-league, the real low non-league. My first choice was a 2nd attempt to get to the Copthall Stadium before Saracens or Barnet take it over and change it beyond recognition. However when some emergency works had to take place, it meant it was a no to Kentish Town, again. When looking for a back-up it did become clear that one of my new year resolutions was to see more of London and what better way than to take the Metropolitan Line right through the city and out to Amersham, one of it’s termini. Oh and Amersham were playing at home! Off we go. 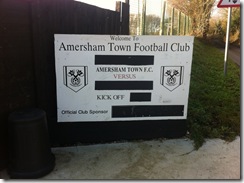 Amersham is a market town and civil parish within Chiltern district in Buckinghamshire, 27 miles north west of London, in the Chiltern Hills. Amersham is split into two distinct areas: Old Amersham, set in the valley of the River Misbourne and Amersham-on-the-Hill, which grew rapidly around the railway station in the early part of the 20th century. The area of the town now known as Amersham on the Hill was referred to as Amersham Common until after the arrival of the Metropolitan Line in 1892. After this date growth of the new area of the town gradually accelerated, with much work being done by the architect John Kennard. It is now known locally as "Top Amersham","the Top Town" or "the New Town". Early trade at Amersham Market was in local grain, much of which was sold to London merchants. During the 18th century a key industry in the town was brewing. After a number of changes of hands during this time William Weller of High Wycombe purchased the brewery in 1775. He, and his heirs, expanded the business by buying a number of local public houses during the next 150 years. In addition to brewing, tanning, lace manufacture and brickmaking all had a prominent place in the manufacturing past of the town. During World War II, the Radiochemical Centre, a scientific research establishment, arrived in the town. This became Amersham International, then Amersham plc, and now, after a number of changes of ownership and name, is part of GE Healthcare. 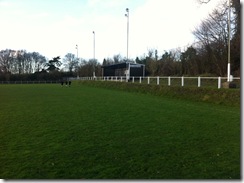 The town’s local football team play around a mile away from the station at Spratleys Meadow. Located on a country lane leading out of the town towards Little Missenden, the ground is a fairly basic, but picturesque one. Being railed off on all sides, although you are only able to stand on 3 of them, the main two aspects of the ground are located down the sides. (Pic above) The Mike Gahagan Stand (or Graham Taylor Stand, both are named on either side!) allows a decent view of the pitch with some seats and a small standing area at the back. Across the way, behind the dugouts, is an old building that is falling down. This did used to have a tree growing inside of it but that has now gone but the old building does add a bit to the surroundings of the Buckinghamshire countryside. The clubhouse is also on site, an old barn style building that does a good pint and has friendly staff. So recommended so far! 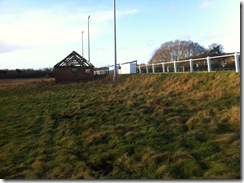 The club currently reside in the Spartan South Midlands League 1st Division after spending all of their football history in the local leagues with not much success. Starting off in the Wycombe & District Combination League they then moved to the Spartan League in 1947, were founding members of the Hellenic League in 1953 (and they won the top flight of that league in 1963) before rejoning the Spartan League in 1972 which then became the Spartan South Midlands League in 1997. They were relegated from the SSML 1st Division in 2002 and were only promoted back after a restructure – where they haven’t looked like challenging for promotion at all. This season it was no surprise then to find themselves in another struggle and were going into this game in 2nd bottom (out of 22 teams) and needed to pull clear of the struggle (bottom side Sun Postal Sports are 7 points behind) to avoid playing such footballing legends as The 61 FC and Aston Clinton next season. Their opponents were also in that relegation struggle being only 1 place and 1 point higher than Amersham. Buckingham Athletic have also paddled around the local leagues in their history with their best achievement only reaching the 2nd Round of the FA Vase in 1998/99. With two teams in dire form and 30 hardcore fans ready, this would either be a classic or reality, a Level 10 struggle. 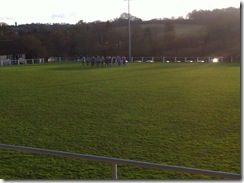 While the temperature was getting colder the match slowly plodded along with all you would expect from a Level 10 relegation clash. Amersham did create some early pressure and fired a shot wide after 4 minutes. Buckingham though did like the ball played up front quickly and looked to hit the home side by bypassing the midfield completely but their strike force lost the ball constantly. I always expect to see at least one goal at Level 10 and it arrived on 16 minutes when ironically, Amersham played a long ball forward which should have been dealt with easily by their #5, instead he completely missed his kick allowing Carl Derewenko to run through clean on goal and lift the ball over Buckingham goalie Jack Bridges to give Amersham the lead. An excellent finish that was worthy of much higher than Level 10. The away side though didn’t lose their heads and fired in a deserved equalizer just 13 minutes later. Some excellent play down the left hand side after some patience build up allowed a cross to come in which was only cleared to the edge of the area. Simon Hodges composed himself and fired in low under goalie Perry Cheadle to give the away side a route back into the game, much to the delight of their travelling fans. 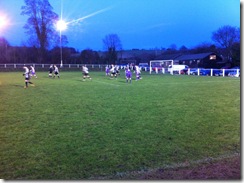 For the rest of the game, it was sadly a Level 10 relegation battle. Both sides went for it but it became a battle that didn’t really fire past the point of average. What made it worse, was the cold starting to get really bad and so I spent the last 20 minutes moving constantly as it was more exciting than the game. By this time, Amersham had surprisingly taken the lead out of absolutely nothing. When the ball got to Derewenko on the edge of the area, nothing looked on. The final ball in this game had been woeful so I was expecting a misplaced pass. Instead he chipped the ball towards goal and it lofted over Bridges’s head and into the far corner. A fantastic finish, again. Buckingham looked stunned and proceeded to play the rest of the game getting near the penalty area only to lose the ball (and likewise for Amersham). The only chance they created was deep in injury time when a long ball over top found Buckingham’s #16 who ran onto it and hammered his shot off the bar. Had that gone in, it would have been a travesty. The #16 had come off the bench midway through the 2nd half and spent most of the game fouling off the ball and getting frustrated. He didn’t deserve a goal and to be honest, neither did Buckingham Athletic. 2-1 it finished. 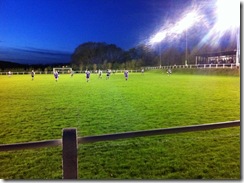 While this SSML clash was better than the last one I saw at Cockfosters, I was disappointed with this game, and cold, so cold. Amersham is a really friendly club so I am tempted to head back in the future – although in the summer months! Both sides should have enough of a points gap to stay above Sun Postal Sports and play SSML 1st Division football next season. This game was an ok, but cold start to 2012. Here’s to the next 12 months! 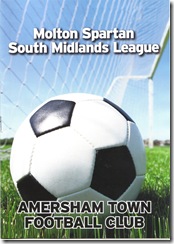