It had been a whole 28 days since my last game when I saw one smaller club in the FA Cup lose out to the larger boys when Hendon finished off Oxhey’s dreams for another season. 4 weeks later and 2 rounds on I was back to try my luck again to see a cup shock. This time it would have to be a major shock as midtable Isthmian League Division 1 side Redbridge took on Blue Square Premier cracks Ebbsfleet United. At stake was a place in the 1st Round proper of the Cup, a chance at a league club and some TV footage too. A big game. 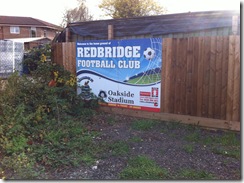 The actual Redbridge in London is in the district of Ilford and the name comes from a bridge over the River Roding which was demolished in 1921. The bridge was made of red brick, unlike other bridges in the area made of white stone. The name was later applied to the wider London borough created in 1965. Redbridge FC though have an interesting history and the club was previously known as Ford United F.C, which dated from a 1959 merger between two older clubs, Ford Sports (Dagenham) and Briggs Sports, both of which were founded in 1934. As Ford United they performed well in the Aetolian League winning the title twice and finishing runners up once. The club though were in serious problems at the start of 1995/6 season, however, as sponsorship was lost and disbanding seemed a real danger, until Vice-Chairman George Adams enlisted Sky Sports as sponsors, rescuing the Club. The 2001/02 season was an interesting one for Ford United as they bought the lease to Barkingside’s Oakside Stadium who needed to find a permanent home to allow their progression up the football pyramid. Barkingside FC (Essex Senior League) still play at the Oakside Stadium and it allowed Ford United to progress up the pyramid. They were in the Conference South during 2004-05 and were promptly relegated and then relegated again the next season from Isthmian League Premier to Isthmian 1 North were they still play today. A play-off final loss in 2007-08 is the closest they have got to heading back up to the heights they were once at. 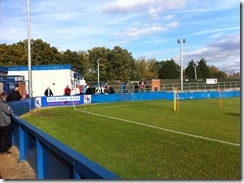 The Oakside Stadium is a decent venue situated right next to Barkingside tube station on the Central Line way out in the sticks of NE London. A good sized clubhouse awaits you when you first come through before you walk around and see an excellent standing, uncovered terrace behind one of the goals. Down the sides of the pitch are two covered areas, one being a seated main stand, the other being a shallow covered area. Behind the other goal is now condoned off but it is just a small standing area. Having to compare it to the Evo-Stik North grounds I’ve been to, it does compare well to places like Lancaster City and Bamber Bridge. Ford United/Redbridge do have FA Cup history as they had reached the FA Cup 1st Round before in 1998-99 (losing 0-3 at Preston N.E) and 2003-04 (losing 1-2 at home to Port Vale in a replay) and were hoping to make it to Round 1 for the third time against Blue Square Prem side Ebbsfleet United. 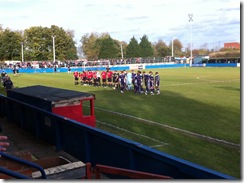 The Fleet themselves have had a recent public history with the curious experiment of MyFootballClub taking over in late 2007. Approximately 27,000 MyFootballClub members each paid £35 to provide an approximate £700,000 takeover fund and all own an equal share in the club but make no profit nor receive a dividend. Members also have a vote on transfers as well as player selection and all major decisions which seems a bizarre way to run things but never mind. Prior to the MFC takeover, the club were known as Gravesend & Northfleet before the name change and were regular members of the Conference National/Blue Square Premier before relegation to Blue Square South in 2010. Instant promotion through the playoffs were achieved last season and would provide a mighty tough test for Redbridge with most (if not all) of their current squad having some sort of Football League experience. 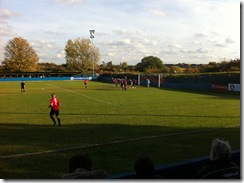 And it was no surprise that the away side made most of the early running by dominating possession and winning some early corners but Redbridge’s back line were well prepared for the barrage they expected to face. No surprise it was still 0-0 after 10 mins which disappointed some Fleet fans stood near me. The Fleet still plugged away though as the opening goal was only a matter of time away and Callum Willock should have scored when he latched onto a mistake made by Billy Sendall but home goalie Adam Rafis got down to his feet to frustrate the away side more. Rafis was a busy man. First saving from a deflected Ricky Shakes shot, (yes that Shakes, the ex Swindon man) before saving a Paul Lorraine header as it was becoming clear this would certainly not be a walk in the park for the Fleet. In fact, Redbridge had a wee spell of their own at the end of the half where they began to show some belief and nearly scored a fluke when Joe Gardner curled a cross/shot (still can’t decide what it was) that just landed on the top of Preston Edwards’ net. (Yes, THAT Preston Edwards) 0-0 at HT which annoyed Fleet fans, it was deserved though. 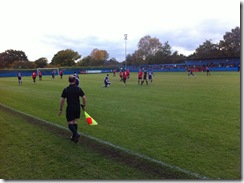 2nd half started like the first with Fleet trying to secure an early goal to knock the belief out of the home side and like the first, the home defence were up to the task. Ebbsfleet did have the best chance of the game early on though as Michael West had the opportunity to side foot the away side into the lead but just passed the ball wide. Oh dear. Soon after this I overheard two fans say “I’m surprised at Ebbsfleet, they are like an average Isthmian League side”. Harsh words, but maybe Redbridge heard this as for the rest of the match they dominated. It was amazing to see the players grow with belief and encouragement as Ebbsfleet began to look like they weren’t up for this. Edwards kept the away side in the game around the 70 minute mark when he brilliantly kept out Vinnie Durrant’s long range effort. While it was heading for 0-0 and a cold Tuesday evening replay before Durrant got a 2nd chance at a cross after a corner and his cross found big man Ryan Murray who powered his header into the bottom corner to send Redbridge fans mental with 10 minutes to go. It was deserved and while Ebbsfleet launched forward, they had completely ran out of steam and ideas as Durrant had another shot which flied past Edwards post before party time turned into dream land for Redbridge on 88 minutes when James Robinson sent Joe Gardner through on the left wing and he finished like Thierry Henry in his pomp by passing the ball away from Edwards. Game finished. Ebbsfleet were done and so were their fans, leaving in droves to discuss yet another 4QR exit. 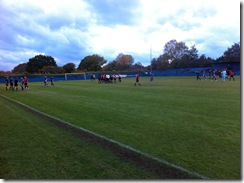 At the final whistle the home players and officials were absolutely ecstatic as they were into the 1st Round for the 3rd time (and the 1st under the Redbridge FC name). They received a “winnable” draw in the form of a home tie against Southern League Oxford City with the winner looking for a FL team in the 2nd Round. (Or another non-league tie to have a better crack at reaching Round 3?) I thoroughly enjoyed this game. Even though it looked to be heading for 0-0, the game was tight and tense and produced a memorable cup shock at the end of it. While leaving the Oakside Stadium, I was delighted for them. I have no connection to Redbridge and have no opinion of Ebbsfleet Utd, but I had a smile on my face at what I had just seen. I had just seen the FA Cup at its best.

Photos from Redbridge vs Ebbsfleet United 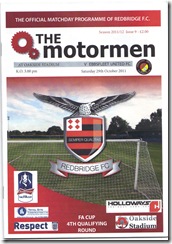 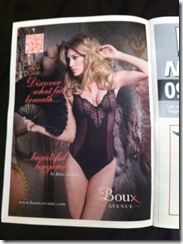