It was FA Vase time again and for the first time since the 2nd Qualifying Round, I would be able to see “my team” in the flesh as I continued the Road to Wembley for the Vase Final on 13th May. With the competition now at the national stage, I was slightly concerned that now I would be able to see some ties, Three Bridges would get Whitley Bay away and an almighty (and expensive) journey would be ahead. Instead it was up to Derbyshire (and £13 for a train ticket) to see parts of the new national forest and the quaint village of Church Gresley. 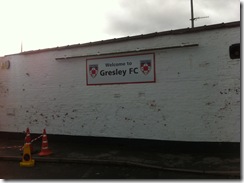 Church Gresley is a village and former civil parish in the South Derbyshire district very close to the town of Swadlincote, between the town and Castle Gresley. According to the 2001 census the parish had a population of 4,805. The toponym "Gresley" is derived from a term for a grassy clearing atop a hill, surrounded by forest. The Domesday Book records it as Gresele. In about 1800 the Mason Cash pottery was founded at Church Gresley and has become a well-known English pottery, producing many kinds of ceramic mixing and baking ware. It acquired T.G. (Thomas Goodwin) Green in 2001 and became part of the Tabletop Group in 2004. There is also the St George and St Mary’s Parish Church which sits in the centre of the village and that’s about it for the small village to the east of Burton upon Trent. 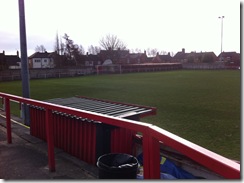 Gresley FC in their current form have only existed since 2009 after their previous incarnation, Gresley Rovers were liquated at the end of 2008/09 season. Rovers had a substantial history after being formed in 1882 and moved into their Moat Ground in 1909, where they still play today. They slowly built themselves up after doing well in the Central Alliance, Birmingham Combination and Leicestershire Senior League before being founding members of the (newly named) East Midlands Regional League in 1961. After being in the top 5 of that league every season until 1975, they moved across to the stronger West Midlands League where again they took some time to get going but after finishing 2nd in 1986, they never looked back with some more excellent finishes and even winning the league twice in a row. They also reached the 1991 FA Vase final where they played Guiseley who romped into a 3-0 lead before Gresley pulled them back and scored in injury time to take it into extra time. Gresley took the lead but were pulled back for a full time score of 4-4, however they lost the replay at Bramall Lane 3-1. In 1992, the reached the Southern League for the first time being placed in the Midland Division when they were promoted up to the Premier Division and even won this in 1997, but their ground was not good enough for the Football Conference (Derby County even offered their vacated Baseball Ground but this was rejected by the FA). From that rejection, Gresley started a downward spiral and were relegated back to Southern 1 in 1999 and then across to Northern Premier League 1 in 2004 before being liquidated in 2009… 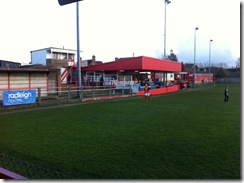 …they came back however as the new Gresley FC and entered the East Midlands Counties League which they won on the 2nd attempt and were in the Midland Alliance this season trying to shoot back up to where they were in 2009. Their Moat Ground is a smashing venue that looks like the typical Unibond League ground with a mixture of terracing, stands and cover that gives the ground a proper non-league character and could easily deal with the 500+ that were here for this game. On the pitch, Gresley are looking very good for a title tilt and currently are in 3rd place but with the games in hand needed to go ahead of Coventry Sphinx and gain promotion. They also haven’t lost a game in any competition since a 3-2 defeat to Rocester in the League Cup 1st Round in early October. A nice 19 game unbeaten run. Off the pitch the club seem very well run now and boast possibly the best website I’ve ever seen at non-league level as well as local hero (possibly) and club mascot Elvis Gresley. He’s a busy chap and even has his own fan page on the Gresley website. Pic below. 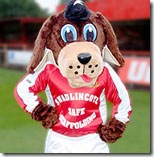 (He ain’t nothing but a hound dog!)

Three Bridges had made the long drive up from Sussex for this and were also going well in their league and were 4th for this game but also had the games in hand to overhaul old chums Rye United and gain promotion to the Isthmian Leagues. They had a tough partisan crowd to contend with though as well as some shocking wind conditions and a slopey pitch but took a surprise lead as early as the 5th minute when Abu Touray intercepted a poor ball and ran into the area only to be taken out by goalie Gary Hateley. He had just come back from his honeymoon and was tanned up proper and probably not as sharp as he should have been to give that away. Tim Rivers easily stepped up and smashed the ball in to give the Sussex side the lead. No surprise when Gresley got right back into the game however and started to pepper the TB goal but one man stood in their way. The Three Bridges goalie Simon Lehkyj. He was a man inspired as he and his defence put in last gasp blocks and saves from Marc Goodfellow and Dean Oliver before Gresley somehow contrived to miss the ball completely when Goodfellow’s cross was flashed across goal. Three Bridges were rarely going forward but looked dangerous on the break through Touray and Elliot Romain who are pacey and direct. 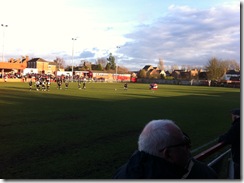 The 2nd half was going to be tougher for Bridges as they were now fighting against the slope and the wind as it showed by the amount of goal kicks that Lehkyj kicked straight out purely because the wind blew them out. Bridges thought they’d doubled the lead early in the 2nd half as Touray finished from close range but it was ruled out for offside. It was a tight call, but I was down the other end of the pitch so couldn’t see it properly. I’ll give the benefit of the doubt to the linesman getting it right. Gresley still weren’t in full flow yet and Romain smashed a shot into the side netting which woke the home side up and they promptly equalized on 54 minutes. For the first time in the game, the TB defence was moved all over the place as Goodfellow picked out Spencer who cut the ball back to Royce Turville to easily finish and make it 1-1. By this time, it was all Gresley, but it was Lehkyj in goal and Nigel Brake at the back for TB who were outstanding in keeping the home side out. The match had now turned a bit spicy too with tackles flying in and the Gresley fans behind the goal giving Lehkyj dogs abuse but the big man stood up to it well by continuing to make saves. By the end of the 90 minutes, we now had that stage of “don’t want to lose it, rather than win it” and so Extra Time was inevitable. 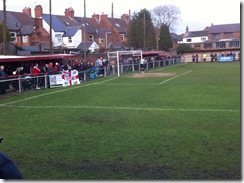 Gresley were clever and started ET kicking down the slope and were right at Three Bridges with Goodfellow forcing yet another good save out of Lehkyj and then Jordi Gough somehow had his shot cleared off the line as the tension around the ground was immense. Three Bridges’ tactic for this first 15 was I felt just to defend but on 105 minutes they hit the bar from a counter attack as Rivers beat Hateley but not the bar. The last 15 of ET was almost like a basketball match, without the scoring. One team would go down and have a shot and then almost immediately there would be a chance at the other end. Goodfellow missed an open net as shots before hand were blocked as this was now edge of your seat stuff. And I was a neutral! Turville was put through, only for Lehkyj to again deny the home side and Hateley had to save well from Touray when he was put through before making the best save of the lot right at the end when he tipped Brake’s shot over the bar. It had finished 1-1 after an outstanding 120 minutes of football and all supporters in the Moat Ground showed their appreciation at the end. 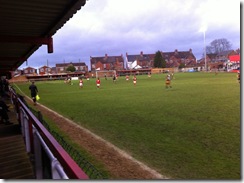 Gresley would now have to travel down to Three Bridges and Sussex for the Replay but you still couldn’t tell what way it would go. This was quite easily the best game I’d seen all season (as well as for quite some time!) and I was glad it had finished as a draw as neither side really deserved to lose. Gresley are a friendly bunch and although some yobbos behind the goal may have taken the “banter” a tad too far on occasions, both sides on and off the pitch had mutual respect for each other well before the replay had took place. United Counties side St Ives Town were now awaiting in Round 5, but before then we had a replay to contend with…

I watched this game with top bloke and fellow groundhopper @GrahamYapp who writes the excellent Modus Hopper Random blog. He is far more organised and his report from this game can be found here already. (With match highlights!)

- Referee: Ricky Wootton – 8/10 (kept his head while others around him lost their’s) 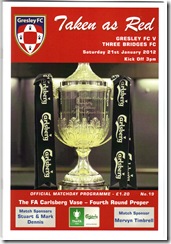